In two months, a pair of cofounders left their jobs, built a minimum viable product, and launched with two billion-dollar brands. Their goal? To do what Klout failed to do: build a tool to helps brands connect with their most valuable fans.

Created by ex-Dwolla business development lead Alexander Taub and developer evangelist Michael Schonfeld, SocialRank enables brands to learn more about the people who follow them on Twitter. Now three weeks old and in the midst of closing a seven-figure round, SocialRank has secured attention from major sports brands, musicians, TV stars, and even the adult entertainment industry.

But, how on earth do you sign two billion-dollar companies as launch partners — Spotify and GoPro — for a product that (at the time) didn’t exist? With one builder (Schonfeld) and one seller (Taub), the duo pitched a laser-focused, niche vision: “We don’t care about tweets,” Taub tells us. Instead, the team just wants to help brands “turn followers into life-long fans.”

In Taub’s eyes, Klout set out to “target the individuals and then go to the brands. They sort of lived and died by the Klout score,” a metric made up of a user’s follower count and activity on various social sites. SocialRank operates from the opposite perspective; the company focuses solely on brands, without vanity metrics.

And yet, the end goals of Klout and SocialRank are quite similar: SocialRank’s long term goal, Taub shares, is to “build a platform for brands and individuals to communicate.” Klout’s original goal was to “bring influencers and brands together” via rewards, or “perks.”

Here’s your online revolution: Klout tells me I’m receiving a “perk” of McNuggets due to my popular tweets about the fast food strikes today

SocialRank appears confident, however, that it’ll fare better than Klout.

Over the past few years Klout has consistently struck the wrong chords with many of the influencers it hoped to woo. 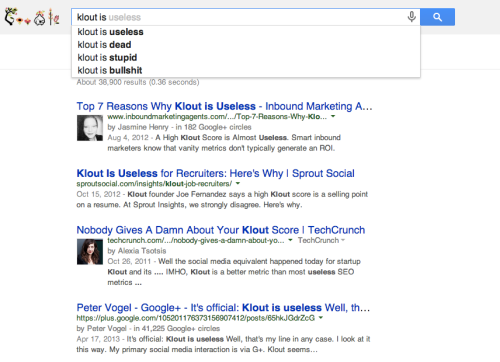 Then, last month’s news hit like a drizzle rather than a splash. After raising over $40 million, five-year-old Klout was bought for an estimated $100 million. While that’s more than a 2x return, it’s no picnic; back in 2011, the company was valued at over $200 million.

SocialRank, though tiny in comparison to Klout, has more supporters than it knows what to do with. Besides Spotify and GoPro, the two-person company convinced Harry’s, theSkimm, and Plated to take part in its launch and also won over key staffers from Google, IDEO, Dell, and Zemanta. Two weeks after launch, SocialRank passed 10,000 registered users sans sales team.

While SocialRank itself is brand new, the product’s origins begin over two years ago with the launch of Most Valuable Follower (MVF), a hackathon-like project [below] which told users who their most valuable Twitter follower was — and later, their most valuable Facebook friend. 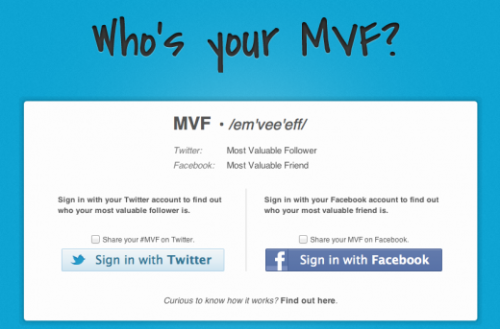 This hack shut down due to a lack of resources when Schonfeld and Taub simultaneously joined PayPal competitor Dwolla, but MVF served as a key signal and proof of concept for SocialRank.

When MVF shut down, Taub recalled, “that should have been the end of the story. But every few months a brand would reach out to us and ask to turn it back on.”

Taub asked them “‘why do you want this? Aren’t there a million tools like it out there?'”

“Across the board they said ‘yeah, [there are apps that] tell you what time of day to tweet, what hashtags to use, and what content to push out, but there’s really no go-to-tool to find out about the people who follow you.”

Months later, Taub and Schonfeld — both 26 — decided they were ready to do their own thing, and the idea to reinvent and refine MVF looked like an obvious choice. That’s the major edge Taub and Schonfeld have over most founders: they launched with both a clear vision and validation already ironed out. 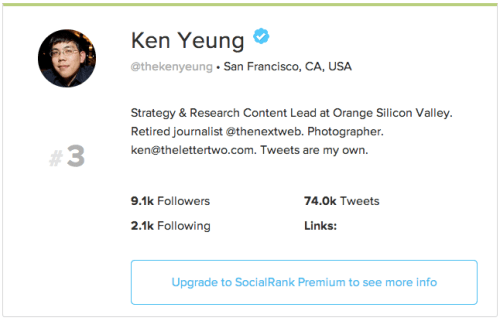 In practice, SocialRank has one early use-case: to enable brands to identify and reward some of their best followers. “We’ve seen some other stuff happen,” Taub says, such as non-physical rewards like experiences, and “for non-profits, which we give the tool for free, we’ve seen a lot of them reach out to their biggest followers to spread campaigns.”

But SocialRank has its doubters, namely the social media monitoring firms it competes with.

Competitor Peter Bray, a vice president at Moz, doesn’t believe SocialRank is doing anything “compellingly different than what’s already out there” — aside from the company’s experiments in “photo analysis to determine gender, age, and ethnicity,” Bray says. “Making an API call to grab a user’s tweets to determine who they most frequently engage with is easy.”

“We already break-out, for example, all of one’s followers by gender, social authority (our measure of influence), and time on Twitter. We also allow greater ways to explore that data. You can quickly summon a list of all your top followers (or those who also follow a competitor). You can sort them by social authority, follower count, time on twitter, and so on. And for many, you can also get lots of additional data: how often they RT others, what percent of their tweets are @mentions, and so on.”

While there’s a lot of overlap between Followerwonk and SocialRank, the latter’s secret sauce comes down to a stark lack of features. So far, SocialRank’s clarity lets it to stand out as a simple sell.

For former Microsoft product planner and Fruji creator Roman Mittermayr, however SocialRank’s current incarnation isn’t so original. Although Mittermayr praised SocialRank for its simplicity, he tells VentureBeat it reminds him “a great bit of Fruji — the very familiar sign-up progress panel, naming everything a report, our day-one term Most Valuable Follower,” and so on.

Mittermayr says SocialRank’s niche focus will hold it back:

“Their core welcome feature, “My most valuable follower” (as in, singular), isn’t anything I can really work with, if I am Adidas, serving a global market, in god knows how many languages and countries. I need to be able to drill down to timezones, regions, see the impact of my tweet across those timezones, identify the heavy influencers, my verified celebrity supporters, stuff like that.”

Nearly 22 months older than SocialRank, Mittermayr tells us Fruji is about to finish its biggest re-write since launch. The details of this relaunch are currently not clear.

SocialRank faces numerous other competitors, including Markerly, Meltwater, and SocialBakers.

It’s still far too early to determine exactly how SocialRank will fare a year from now, but one thing is clear: the firm is taking a different route than that of its competitors. For both Fruji and SEOmoz, more features equate to a better service. For SocialRank’s Taub and Schonfeld, too many options results in a “cumbersome” experience. In other words, SocialRank believes its competitors suffer from feature bloat.

A focus on simplicity won’t keep SocialRank from expanding its feature set, we’re told. The company just launched multiple account management and the ability to export users into private Twitter lists. Next week, SocialRank tells VentureBeat it will roll out a series of filters, allowing brands to determine their best non-media and non-celebrity followers in a specific region. For example, Taub shares, Spotify will be able to determine their best fans in New York who like country music.

With its pending seed round, SocialRank already proved there’s interest. Next up, the company will need to show that it can scale without turning into a sales team-driven service like Google’s vanishing social media management company Wildfire.

Two months ago, Taub and Schonfeld left their jobs, built an MVP, and launched with billion-dollar brands on board. From debut, Taub says SocialRank “launched as a layer of information.” The team is only starting to suggest what brands should do with that information.

But in the future, SocialRank may evolve into something that looks a lot more like Klout than it does today. Currently SocialRank only targets brands, and yet, SocialRank’s brands are already doing the dirty work of finding and rewarding the most influential fans. A marketplace model could emerge out of this exchange.

It’s the reverse of Klout’s famous perk system, and in the early stages, it seems far more natural for companies to reach out to fans themselves with rewards. GoPro, for example, has already seen results [below]. 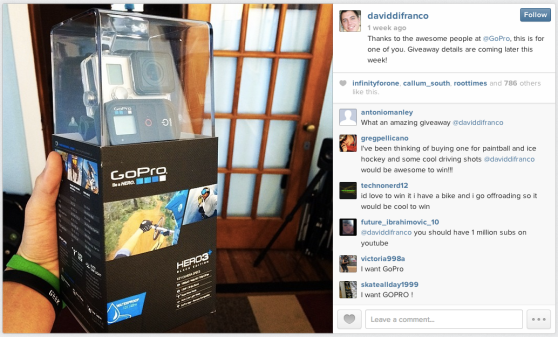 Whether SocialRank will realize Klout’s dream without falling into the same traps has yet to be seen. Most importantly, this may not be the future Taub and Schonfeld have in mind for SocialRank.

Regardless of these variables, SocialRank’s prospects look strong — despite how difficult it can be to determine the real value of a social media influencer.