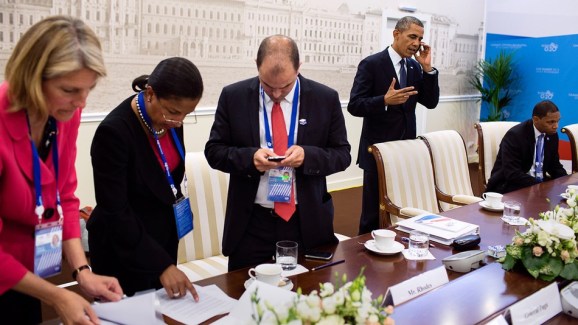 It’s not just consumers who are dumping their BlackBerrys — even the White House is considering alternatives.

Specifically, the White House is testing Android phones from Samsung and LG, reports the Wall Street Journal. The White House confirmed in a statement that it is looking at a “variety” of mobile devices, but it didn’t specify which models.

No matter what alternatives the White House is testing, the news is a big blow to BlackBerry, whose devices and secure network technology used to be the default option for government agencies and businesses dealing with sensitive data. Now that Android device makers are focusing more on security, BlackBerry risks losing one of the few remaining audiences who rely on its technology.

According to the WSJ, the White House’s internal technology team and the White House Communications Agency (a military group that handles President Obama’s communications technology) are testing the new devices. While we don’t know which devices they’re considering, I’d imagine Samsung’s Knox security platform and LG’s Gate platform are being examined closely, since they do many of the same things as BlackBerry’s technology.

Sensing the danger of critical government users moving away from its platform, BlackBerry announced in January that it would launch a Security Innovation Center in Washington, D.C.

“We are committed to working with government and industry experts to solve some of the biggest challenges we face in securing mobile communication,” BlackBerry’s new CEO, John Chen, said in January. “The Washington, D.C.-based security innovation center will be focused on creating lasting partnerships that will encourage ongoing dialogue aimed at making better products and policy.”

We’re still waiting for more details on what BlackBerry will do with its Security Innovation Center. Chen recently noted in a Bloomberg interview that he met with the White House to figure out what it likes about BlackBerry as well as what it would like the company to develop, the WSJ points out.