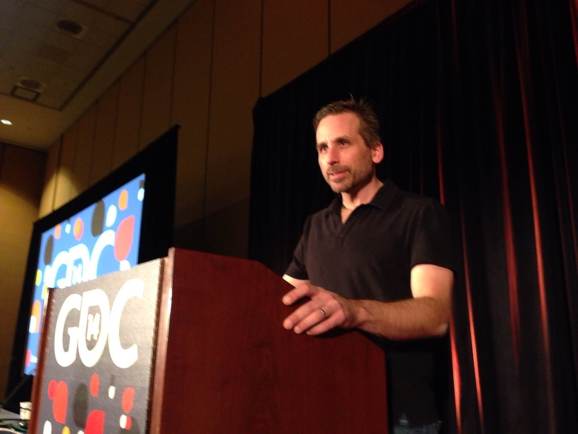 SAN FRANCISCO — Ken Levine has developed a reputation for being a master storyteller over the years thanks to games like System Shock and BioShock. But after nearly 20 years, he’s ready to try something new.

“I’m very proud of what I did with linear narrative. I we think took it pretty far,” Levine said during a talk Friday at the Game Developers Conference 2014. “So why change? The problem with narrative is that it keeps getting bigger and bigger and bigger. And that gets time-consuming and expensive, and you devote years of your life to this one sort of big moment where you ship the game, people play it for 12 hours, and they have that great experience. You see cosplayers and fans, but you don’t have that constant engagement with the audience.”

With that, Levine plans to create something new. He stressed during his talk that he’s not pitching a new game. Instead, he used the time to sketch out a new game system that he has in mind for the audience, though he has no idea what form that system will ultimately take.

Instead, Levine referred to system as “scratching in the dirt” on a player-driven, replayable narrative in which it is possible to make meaningful choices and watch the world evolve.

He also hinted that his desire to build upon some of these new ideas is what lead him to close Irrational Games and retain a significantly smaller staff than the one he had working on the 2013 blockbuster, BioShock Infinite.

“To do something really different, we really had to go back to the drawing board. We needed a new structure, a smaller group of people, and time. We needed time to fail over a long period and not have 150 people who are looking and saying, ‘Dude, what am I supposed to be doing today?” Levine said.

Levine outlined a world with villages containing orcs, elves, and other races. Among each village would be “stars,” he said, each with what he termed a “passion.” He described a situation in which Frank the Orc Blacksmith hates elves and shows his appreciation for anti-elf actions by the player by offering special items and lowering prices. Actions would impact a linear gauge, which would go up and down depending on whether or not the character is happy with the player character.

“I want to create a narratively driven experience where the narrative elements are nonlinear and they interact with each other. They bounce off each other like electrons or atoms,” Levine said. “And all of these elements bounce off player actions.”

Within that basic structure, Levine feels that there are many interesting choices to be made. One of the situations he described featured Betty and Veronica, both of whom want to get married. The player may like Betty better as a character, but marrying Veronica may offer better material rewards. Such choices have the potential to create a tension that Levine says he finds interesting.

Over time, he said, a wave of zombies could arrive that changes the NPCs’ motivations, or they may be put into a situation in which they have to decide whether to kill an NPC that another NPC loves. Frank the Orc may settle down, get married, and decide that he doesn’t hate elves as much anymore. With co-op, players may find that their relationship with an NPC comes into direct conflict with that of their friends, creating even more tension.

With good writing, Levine feels, players should have to decide between physical gain and emotional involvement. This can in turn lead to “false friends, leading others on, betrayal, and eventual reconciliation.”

“Do your job right, and it leads to something like this,” Levine said as he showed a promotional image from Game of Thrones.

At the moment, the system doesn’t constitute much more than a napkin sketch for Levine. He sees it as an opportunity to contribute to an ongoing conversation between other developers that he says he respects.

However, it’s clear that the man known for being a consummate storyteller is ready to try something completely new. And though Levine has yet to even make it to the drawing board, let alone sketch something substantial on it, the seeds for something great may have already been sown.