Berlin-based Wooga made a big splash in social games with casual hits like Bubble Island, Monster World, and Diamond Dash. But making the switch from Facebook games to mobile wasn’t easy for the 5-year-old company. It had a false start with a game in the HTML5 format, the lingua franca of the web, and shifted gears.

But Jens Begemann, the chief executive of Wooga, kept at it. Last fall, the company launched Jelly Splash, which became a monster hit, as did Pearl’s Peril. Now 70 percent of the company’s revenues come from mobile, and revenues are double what they were a year ago. With a refined process for making games, Begemann believes the company can keep growing with about two hits a year.

We sat down with Begemann for an interview at the Game Developers Conference in San Francisco this week. Here is an edited transcript of our talk. 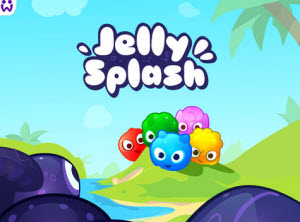 GamesBeat: Last time we talked, Jelly Splash was doing well. What’s your update on how things have gone so far?

Jens Begemann: Jelly Splash continues to do very well. We have since also launched on Android. We’re happy that it’s stayed high in the charts for so long. As a result of that, our revenues as a company are now twice as high as they were a year ago. We’re happy with our growth. We’re expanding and growing.

GamesBeat: Do you credit that mostly to the one game?

Begemann: For us, the key is how we can repeatedly create hits. In this industry, in mobile, which is very hit-driven, it’s about how you can have multiple hits. Our goal is to have two hits a year. We had two last year, which were Pearl’s Peril and Jelly Splash. Jelly Splash got more media attention, but both were very successful.

What we’ve done over the last year is completely change the way we create games. This is how we show it visually. We call it the hit filter. We develop about 40 prototypes a year. Out of those, we stop most of them. Only about 10 games go into production. Some of them soft launch. We expect only three full launches out of those 40 prototypes. But because of always filtering along the way, questioning every project every few months, we believe we can filter out the hits and thereby have two hits like we did last year.

GamesBeat: Where does the internal filtering give way to the user testing? At what point do you introduce the game to users?

Begemann: There are three stages. In the early stage, when it’s about concepts, we’re internally discussing it. When it comes to a prototype, we already do internal user tests. We get people from outside and give them the prototype and let them play it. We see what they do. In addition, we also have everyone at Wooga playing these prototypes.

As soon as you go to soft launch – that’s when you launch it in one market – then you go and watch the numbers, and the decisions are based entirely on the numbers from consumers. 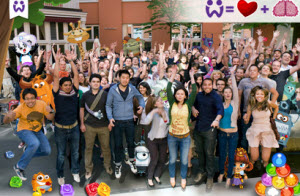 GamesBeat: At what point would you say you are most drastically changing the ideas behind your games?

Begemann: We try to do more of that in the early stages. The later you make drastic changes, the more costly it is. With Pearl’s Peril, four or five months before launch we made some really drastic changes. That was very painful. But we try to sort out the core of the game in the concept phase. That’s where we focus on it.

This is a major change to the way we create games. In the past – and I think this is how most companies do it – you do a prototype, and if it looks good, you go all the way forward to launch. Here we have this filter where every few months, we question every project. If we think a game doesn’t have the potential to become a hit, we don’t continue working on it. It’s a big change, but it’s also a big reason why we’ve been able to continuously grow over the last five years. I believe we can have two more hits this year, out of the games we have in development.

GamesBeat: And these hits can sustain how large a company now?

Begemann: We’re a bit over 250 people. We’ve been profitable since more than two years ago. To us, a hit is a game that does tens of millions of dollars in revenue. Even if we didn’t have a hit, we could sustain the company, but obviously we want to grow. If you want to grow revenues a lot every year, grow by 50 to 100 percent a year as a company, it helps to have two hits a year.

GamesBeat: What are you satisfied with now? As far as monetization goes, are you happy with the way the industry does it right now?

Begemann: A number of games out there do free-to-play well, but there also games out there that don’t. The games that do it well are those that can keep users in the game for years, and where people can play the game for free for years. Then a small percentage of people spends money and that’s what propels the revenue forward. That much is all in development.

Because we believe that this process works, and that our system can create hits, we’re also expanding our work on new games. One thing we’ll announce here at GDC is that we will open up another internal studio in Berlin. We’ll still be in Berlin, and it’ll be part of our office, but it will be a separate studio. We’re looking for a head of studio, so we’re also here this week for recruiting, to talk to potential candidates.

What we’re focusing on with the new games we create is designing them for mobile from the ground up. We ask ourselves, if you don’t have the restrictions of a mouse or a keyboard, and you think about the touch screen first, what kind of games can you do that are based on touch, on gestures? How can you do new kinds of games that haven’t been done in the past? Nearly every game designer still thinks about the mouse first.

GamesBeat: Do you see the rest of the competition doing things the way you guys are, releasing far fewer games?

Begemann: Maybe some companies do, but I talk to a lot of people and show them this chart, this hit filter. I’ve shown it to the founders of other companies. I think most don’t do it that systematically. For us, roughly every three months, we sit together and question every project. We ask ourselves if we should continue working on this, yes or no? Very few companies do it this way. We’re a bit unique, I think.