The Deception series is all about one thing: pain, and lots of it. Only I’m not so sure anyone deserves this much agony.

Deception IV: Blood Ties is the first entry in Tecmo Koei’s strategy-action series since Trapt came out in 2005. It’s still exclusive to PlayStation — this time on the PlayStation 3 and PS Vita (cross-platform and out today, March 25) — and with anime-style visuals, it’s the best-looking title yet. But it doesn’t seem like much has changed: Your goal is still to set the deadliest traps possible.

That’s what kills Blood Ties. It’s dated. This was my first foray into the world of Deception (on PS Vita), and while I didn’t have to make a deal with Satan, I did kill a lot of innocent civilians, neurotic (and occasionally lovesick) warriors, and religious fanatics in order to bring the Lord of Darkness back.

Ages ago, 12 saints sealed away the Devil using 12 Holy Verses. Now you’re using those same relics to punish their descendents and resurrect him. He is your dad, after all — Laegrinna, the character you play, is Satan’s daughter. You have the power of his daemons: Caelea, who specializes in Elaborate punishments; Veruza, who’s good at Sadistic torture; and Lilia, whose devices are Humiliating in nature. 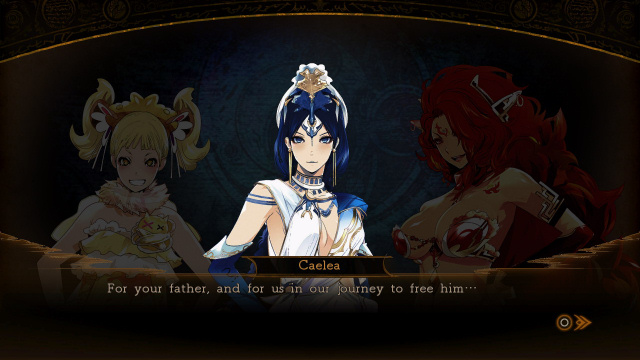 Above: Caelea, Veruza, and Lilia are daemons who specialize in torture.

Each trap can be activated on the ceiling, floor, or wall. You’ll have to be cunning to survive three waves of battles in each story chapter. Enemies have resistances and immunities, but if you can ensnare them once, you can launch them from one trap to another.

Blood Ties is all about trying to execute the most gruesome and complex sequences possible, so it’s fun in a sick way, especially when something happens that you hadn’t anticipated. That’s when the stage traps come into play. You might lead a sorceress onto a springboard and send her flying onto an amusement park carousel of death — then switch to a different room to steamroll her with a train.

In addition to the main story, you can attempt Mission mode — a series of objective-based challenges — or try Free Battle, which lets you choose the stage and enemies. That mode won’t give you any Warl, though — basically currency for purchasing or “unbinding” new traps, abilities, and costumes that you’ve unlocked. 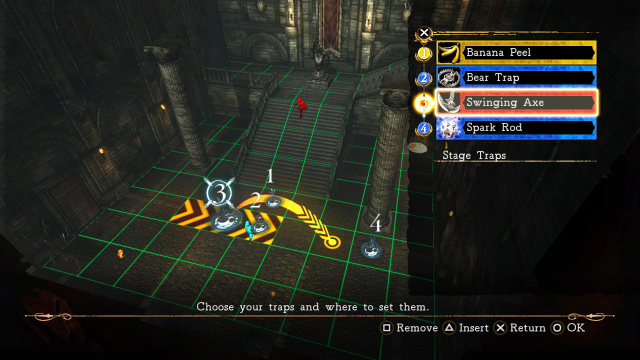 Above: This is how you plan out your strategy. The action pauses while you lay traps.

Then there are Cross-quests, which despite forcing you through a lot of saving and downloading is a cool feature. Like Free Battle mode, you can create a challenge, but you can also set the conditions — as simple as defeating all enemies or as tough as earning a certain amount of Ark (the overall score from trap combos and damage, which breaks down into Warl).

So hypothetically, you could play Blood Ties forever. I’m just not sure why you’d want to.

Blood Ties is tiring. When you fail, you can retry that part in the chapter, but you’ll reface a flurry of opponents, and you can’t save in between. It takes time to set up a room and lead foes into the contraptions, and that’s a lot of what you’re doing — running around and guiding enemies that are like lab mice to their doom. The A.I. aren’t that smart. Run toward the left a little, and they’ll go around an obstacle that way, too, and step right onto your trap.

The settings get boring. Blood Ties provides a lot of rooms per location — a castle and ruins, for instance — but you’ll be seeing these over and over for a few chapters before you move on. 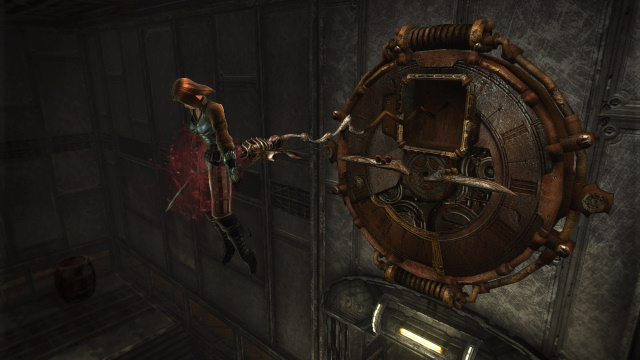 Above: A stage trap at work. Ouch.

My experience with Blood Ties was a blur. Building trap sequences felt routine even on new stages, and guiding enemies — who all felt very similar to one another — onto them was monotonous. A game like this can offer infinite trap combinations, but the mechanics don’t get better.

Blood Ties is hard. I spent most of story mode with the auto-defense ability enabled, which means Laegrinna would dodge incoming attacks but earn half as much Ark from combos. It made bosses like Lyla Gun Feyconia much easier to handle. She’ll shoot you with her gun and keep firing in succession so that when you get up, you fall back down again.

So with this level of difficulty and time investment, it would be nice to have a quick-save feature of some kind. Once the game crashed, and I had to restart the chapter all over again — and I was about to beat it. 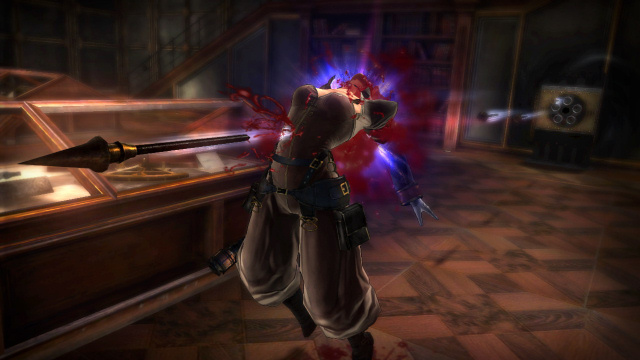 Above: If your opponent is weak to electricity, you can shock them in place and then hit them hard.

The difficulty spikes when you reach the final boss. I’m still grinding through that. She launches nonstop attacks and has a ton of resistances and immunities, so suddenly your favorite traps are useless. One way to match her is to acquire Warl on the side for a more powerful arsenal, but Mission mode is a steep challenge for the average player (try killing 10 enemies in 60 seconds), and what you gain may be too little to buy many of the new traps you unlock. Keeping the auto-defense ability on can cripple you even more. This is a huge roadblock that ruined any fun I was having with the game.

I’ve had my fill of Deception. Besides adding a wealth of content, Tecmo Koei hasn’t done much to bring this series into a new generation, and its difficulty and tedium might alienate anyone but the most hardcore fans. This is one classic that should have stayed where it belongs — in the past.

Deception IV: Blood Ties was released for the PlayStation 3 and PlayStation Vita on March 25, 2014. The publisher provided GamesBeat with a PS Vita copy of the game for the purpose of this review.