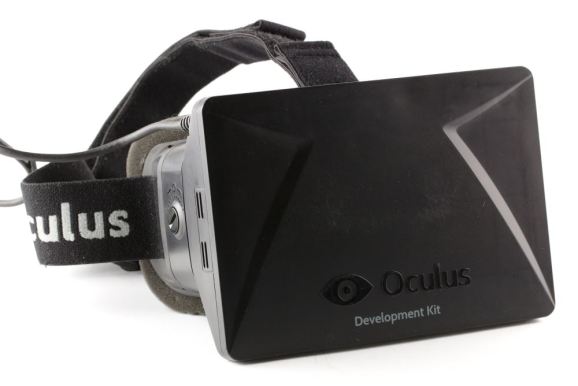 This is the Oculus Rift development kit, which is compatible with Valve's just announced SteamVR.

Facebook owns your digital social life. Now it’s getting into your simulated life as well.

The social network has just announced that it has acquired Oculus VR, makers of the upcoming Oculus Rift head-mounted virtual-reality display, for $2 billion. That includes $400 million in cash as well as 23.1 million shares in Facebook stock with a current value of $1.6 billion.

The Oculus Rift is one of the most high-profile devices for accomplishing virtual-reality vision. Players strap the device to their heads, and all they can see is the Rift’s 3D display. The unit then tracks the players motion and orientation to render a virtual world. It is compatible with PC and anyone can make and release software for it.

While Oculus VR is working on a headset, it also plans to work on solving VR technology for touch and smell as well.

“Mobile is the platform of today, and now we’re also getting ready for the platforms of tomorrow,” Facebook founder Mark Zuckerberg said in a statement. “Oculus has the chance to create the most social platform ever and change the way we work, play, and communicate.”

“We are excited to work with Mark and the Facebook team to deliver the very best virtual reality platform in the world,” Oculus VR cofounder Brendan Iribe said. “We believe virtual reality will be heavily defined by social experiences that connect people in magical, new ways. It is a transformative and disruptive technology that enables the world to experience the impossible, and it’s only just the beginning.”

Oculus will continue working toward a commercial release of its hardware through its California-based headquarters.

In a post on his Facebook page, Zuckerberg explained that Facebook’s mission is expanding. While the company has focused recently on building apps for mobile, it wants to start looking to platforms beyond smartphones and tablets.

“We have a lot more to do on mobile, but at this point we feel we’re in a position where we can start focusing on what platforms will come next to enable even more useful, entertaining, and personal experiences,” wrote Zuckerberg. “This is where Oculus comes in.”

Oculus Rift started as a personal project of Iribe and Oculus VR cofounder Palmer Luckey. In 2012, the company took the device to Kickstarter to raise $250,000 from fans interested in crowdfunding. Excited by the prospect of working virtual reality, gamers ended up contributing more than $2.4 million.

Oculus has since sent out thousands of its early development-kit version of the Rift, and studios are already working on games. This kit has a relatively low-resolution screen and is missing some of the motion-tracking that the final unit will perform.

One of the earliest confirmed games is a space-flight sim titled Eve: Valkyrie. It puts players in the cockpit of fighter jet. When a virtual pilot looks up out of their ship’s viewport, they can really see everything around them. Here’s an early trailer that shows off some gameplay from Eve: Valkyrie in action:

During the recent Game Developers Conference in San Francisco last week, Oculus introduced a revised version of its development kit that it has started selling for $350.

Also at GDC, PlayStation maker Sony announced its own virtual-reality helmet called Project Morpheus that it will work with the company’s PS4 console.

Markus “Notch” Persson, whose sandbox game Minecraft is a phenomenon on both PC, mobile, and home console platforms, said today in a blog post today that “virtual reality is going to change the world.” But he wasn’t happy about Facebook acquiring a company he backed when it was seeking seed funding.

“I definitely want to be a part of VR, but I will not work with Facebook. Their motives are too unclear and shifting, and they haven’t historically been a stable platform,” Notch wrote. There’s nothing about their history that makes me trust them, and that makes them seem creepy to me.”

“And I did not chip in ten grand to seed a first investment round to build value for a Facebook acquisition.” [Emphasis is Notch’s. –Ed.]

Oculus is the latest in a string of acquisitions for Facebook. In February, Zuckerberg’s company acquired the chat program WhatsApp. Last year, the company picked up photo-sharing software Instagram.