NEW YORK CITY — So far, 2014 is the year of the rehashed Android flagship smartphone. But in the case of HTC’s new One, that’s a good thing.

HTC’s newest phone sports a 5-inch screen (pretty much the standard these days for Android phones), a new Qualcomm 801 Snapdragon processor, and two rear cameras (which should make it better at taking photos in low light) among other features. Most importantly, the phone keeps the same metal case as last year’s One, which offers a more premium feel than a mere plastic case. The phone also packs in a larger battery, which offers 40 percent more battery life than last year’s One. 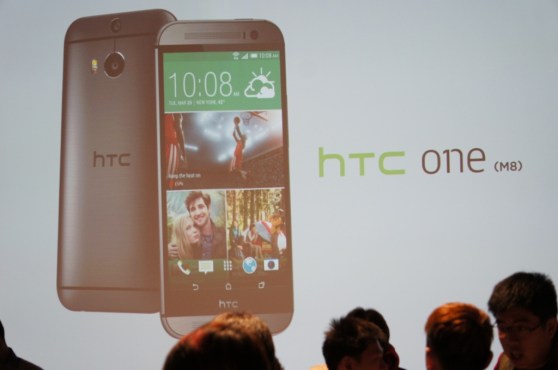 “I have been working at HTC for 17 years pursuing perfection,” Peter Chou, HTC’s cofounder and CEO, said as he kicked off the ceremonies today.

He described last year’s One as the best-selling smartphone in the company’s history and boasted that it’s still winning awards today (it was voted best smartphone at Mobile World Congress last month).

Chou, not surprisingly, made a big deal over the new One’s metal case. Though it’s pretty much the same as last year’s design (with a mirror-like finish and a sharper brushed metal sheen), few other phone makers have made the effort to build their phones out of metal. Chou explained that HTC worked hard to make sure the phone’s metal case doesn’t interfere with its antenna (something that caused issues for Apple’s iPhone 4).

Jonah Becker, HTC’s SVP of design, joked that the company calls its latest Sense software “Sixth Sense.” The new software is smarter about finding content that you’d like, which should make it a more useful news feed than last year’s Sense software. HTC is also opening up Sense to developers — Becker showed off Foursquare and Fitbit integration as examples. The new Sense software will be available for other phones in the One family this spring.

Among other changes to the new One, Becker points out that the stereo BoomSound speakers have been redesigned to be 25 percent louder and offer richer sound. HTC has also revamped its TV app to offer more content recommendations. On top of its battery improvements, HTC has also added a low-power mode that lets the phone stay in standby for up to two weeks. (Samsung offers a similar feature with the Galaxy S5.)

HTC’s new phone isn’t just about killer specs — Becker described a slew of new gestures that make it easier to use. You can now swipe the phone from standby mode to go directly to your Blinkfeed or most recently used app. You can hold down the volume button to immediately access the camera from standby. And you can also just hold up the phone to your ear to answer a call.

In addition to taking better photos, the new One also lets you tweak photo settings manually (something photographers should love). The dual-camera sensor setup also adds depth-sensing capabilities to the camera, allowing you to focus on different parts of a photo after you’ve taken it (just like the Lytro camera). Taking a hint from Vine, you can also pause videos while recording them, allowing you to create multiple shots within the same video. 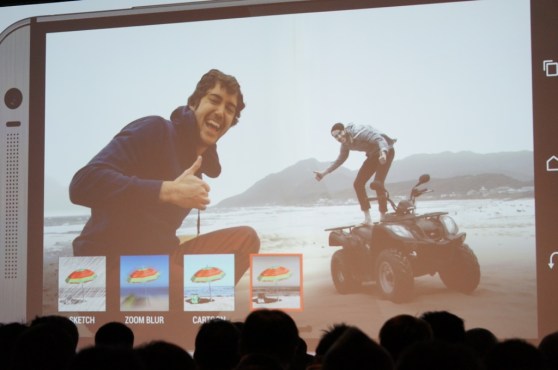 What does this mean for HTC?

HTC desperately needs this new One to be successful. The ailing Taiwanese phone maker’s last earnings report for 2013 showed a slim profit of $10 million on revenues of around $1.4 billion, a 28 percent drop from last year. The company also expects another dip in revenues and an operating loss for the first quarter of 2014.

Samsung also stuck to the familiar for its recently announced Galaxy S5, but that design feels even more dated today given that Samsung has been using it for more than two years now. It makes sense for HTC to give its striking One design another shot — the original was well-reviewed by critics, but it wasn’t a breakout hit among consumers (despite Chou’s claims that it was HTC’s best-selling phone).

So when can you get your hands on this beauty? Jason Mackenzie, HTC’s president of the Americas, announced that customers in the U.S. and Canada can order the phone starting at 1 p.m. Eastern today and receive it as soon as tomorrow. Verizon customers can also get it in-store starting at the same time today. The new One will launch in more than 100 countries and on 230 carriers in April.