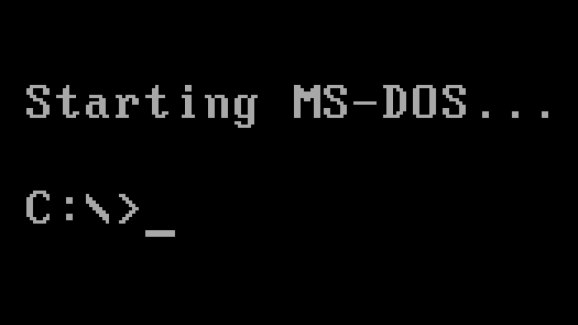 I can’t explain why this story has me so excited. It takes me right back to 1987, hanging out on the living room floor, futzing with floppy disks, command prompts, and the original version of the adventure game King’s Quest.

I remember you, MS-DOS. I remember your bleeps and bloops, the non-curves of your blocky typeface, your very smell. And now, I can have you for my own.

For those of you who’ve hung on to this story to this point but managed to skip the headline, here’s the gist of it: Microsoft has open-sourced MS-DOS, its very first operating system. It’s also open-sourced Word for Windows, but whatever.

Microsoft actually bought the rights for QDOS (stands for “quick and dirty operating system) from Seattle Computer Products in 1981 for a paltry $25,000. What happened next is computer history.

And this is probably why the code is being released in partnership with the Silicon Valley-based Computer Science Museum as part of its historical code source series.

IBM went outside the company for many hardware and software components of their 1981 personal computer. Though most vendors were kept in the dark about the project, code-named “Chess,” IBM developed a unique relationship between their Boca Raton-based team and Microsoft, then a small company based in Seattle.

Microsoft, which was providing the BASIC language interpreter, agreed to also supply an operating system. Without their own operating system already in place, they licensed a product from nearby Seattle Computer Products and worked closely with IBM to make the changes they wanted. It shipped as “PC-DOS” for IBM and “MS-DOS” for other PC manufacturers. We are today releasing the source code of MS-DOS version 1.1 from 1982, and of version 2.0 from 1983.

How fun is that?

A Microsoft rep writes of the news, “It’s mind-boggling to think of the growth from those days when Microsoft had under 100 employees and a Microsoft product [MS-DOS] had less than 300KB [yes, kilobytes] of source code. …

“Great things come from modest beginnings, and the great Microsoft devices and services of the future will probably start small, just as MS-DOS and Word for Windows did.”