This release marks an important step for Mozilla’s Social API — the API was criticized in the past for its limitations, including the inability to support more than one social network at a time. Social Bookmarks could help the browser company recruit social media services to build new, more consistent extensions for Firefox.

Integration with Pocket [below] is a nice start. 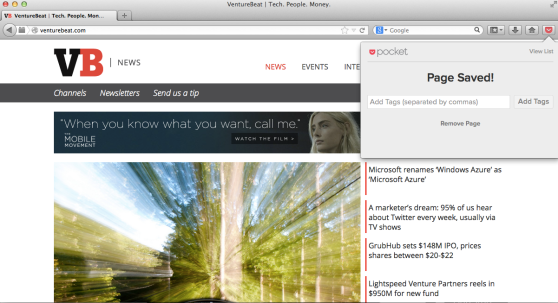 Mozilla is in the midst of reinventing itself. Once a leader in Web browsers — and the company that threw Microsoft’s Internet Explorer off its top spot — Mozilla faces increasing competition and criticism, particularly in comparison to Google Chrome. Along with the Firefox browser, Mozilla is working to diversify itself with projects like Firefox OS. In fact, the hiring of Eich will play a crucial role in Firefox OS.

As for Firefox, the browser will soon be redesigned in Firefox 29. You can try out the new look for yourself in the latest Firefox beta.