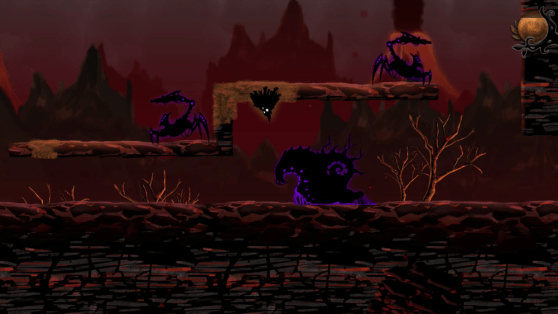 Above: Escape the void on your Wii U with indie game Nihilumbra.

GamesBeat: I take this is for the Wii U, but what about other Nintendo platforms like the 3DS?

Baker: Absolutely. The 3DS is huge for us, and we have a lot of developer support on the platform … and a much larger install base since it has been out for a while longer. In terms of the focus on this show, I think we’re really wanting to show how much easier it is to bring that content over to the Wii U. 3DS is kind of a different beast because there [is] a different architecture and even … you know … I’m always amazed by some of the developers that are going [simultaneous] release for some of their titles on both Wii U and 3DS because they are completely different development cycles and time lines. So there are games — they aren’t Unity-based — like Shovel Knight that are releasing on both platforms at the same time.

GamesBeat: Part of the reason I bring this up is because Nintendo has been really good at releasing a home system and then somehow tying their portable system into it. When the Nintendo DS first came out, one of the thoughts that popped into my head was, “WTH are they going to do as far as this integration. There are two screens.” And then when the Wii U came out, I was like, “OK. This.” I can now see developers creating a 3DS and a Wii U title at the same time.

Baker: That makes a lot of sense, but the architectures for those devices are so completely different that we haven’t really made it conducive. I know there is a lot of interest in bringing Unity over to 3DS, which would solve a lot of these problems. You go to any developer conferences, and you ask what engine are people using, and 90 percent of them are using Unity right now. So it would be a huge shortcut to bring it to Wii U, press a button, and then have it available for 3DS but … we’re not anywhere near [that].

GamesBeat: Oh, yeah. I definitely don’t think this is something that can auto-magically happen.

Baker: Yeah, we are working on that. We are working with other middleware providers as well — nothing to announce right now — but we are trying to make it as easy and as intuitive [as Wii U and Unity].

Baker: Possibly … I mean we have content from Unreal that people have brought over, stuff like Q.U.B.E: Director’s Cut. We showed that off at previous events, that was done in Unreal. So there are opportunities to bring that over but we haven’t built specific support for it. So it’s if anybody creates their own engine, they are kind of on their own as far as figuring out how to get it onto our Wii U platform.

You know, a lot of [indie Unity Wii U developers] were surprised, bringing [their project] over to Wii U with a button that compiles it and within a minute they’ve got a game running. It’s not optimized, but it’s running on a Wii U and on the Gamepad, and it’s this shocking moment of, “Oh my God, that was really easy”. The tough part is over. Now you need to tweak it.

GamesBeat: I’m sure part of that shock too is that Nintendo … well, the Big Three have this legacy of being closed off. We’re still growing out of this sort of “hands off” feeling to home hardware. That era of “If you’re not a big publisher, if you’re not a big developer, then stay away because you’re not getting on here.” Especially Nintendo. So I’m sure that is a big shock for most indie developers to be like, “Holy crap, I just put something on a Nintendo box.”

Baker: It really is, and I think we just want to change that mentality, but you can’t do it over night. That’s why we’ve been hitting that message as much as possible over the last year. So even coming to an event a year later, we’re still educating people about the availability of these tools. Even the head of our developer relations, he did a presentation at the Unity booth that showed people this is how you become a developer for the Wii U and how you become a part of the Nintendo family and how easy it is to get through that process.