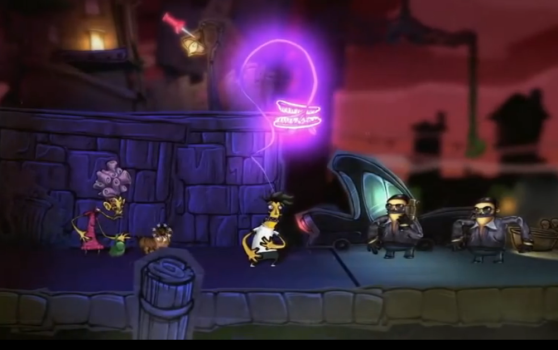 Above: Zoink is bring its brain-powered platformer, Stick It to the Man, to the Wii U.

GamesBeat: Where is this big push “to bring the indies in” coming from within Nintendo?

Baker: A lot of it is coming from us in the licensing department, you know, kind of similar to what you just said. There are certain parts of Nintendo that are shrouded in mystery, and licensing is one of them. There is so much attention toward Nintendo’s first-party products and what they’re doing with Mario or Zelda or Donkey Kong … but we [the licensing department] have always been fighting since the very beginning to try to push third-party content and look for integration opportunities. …And on the developer’s side, you know, we’ve been supporting indie content for a really long time. It’s just … we haven’t shouted it from the mountaintop.

I mean, we were doing self-publishing back in the Wii days when we launched the Wii Shop. We launched the World of Goo, and that was an indie darling that started on Wii. We had the Bit Trip series, we had Cave Story … all those games started out on Wii, and people kind of forget about that because there is this huge push from the other console makers about how indie friendly they are.
So, we have some catching up to do, though, because we had some old processes … because we’d never done it before … so now we’ve been slowly tweaking that over time and trying to make it as easy as possible for these guys [indie developers]. I think the thing with Unity is, we’re the only platform that gives all of their stuff away for free and we don’t ask for anything in return. We’re not asking for exclusivity or for them to utilize certain features, it’s more that they need to look at their ROI. …If they are making something in Unity, they have every right to bring it out to as many platforms as possible.

GamesBeat: I got to tell you, man, if you had told me several years ago that Nintendo would be doing this, I’d say, “No fucking way.” You guys had a legacy for a time where you didn’t seem to even care about the third-party all that much. I’m talking about the big publisher third-parties at that.

Baker: I know, and this is heart-breaking for me. This is my job, and it was really, really hard.

When we had such great third-party content and a lot of it coming out exclusively, and Nintendo really hasn’t taken advantage of it so, we’ve been fighting hard for these opportunities. One of the proudest moments of my career so far has been IndieCade, where we had this opportunity to have seven teams interacting there, showcasing third-party content and not a single Mario game. Not a single Zelda game. It was all third-party, and it was just really cool to have that opportunity to promote cool innovative stuff coming out. That’s what we are trying to do more of.

It’s always going to be a struggle because Mario makes a lot of money, and we have to give him some attention, but at the same time these guys [indie developers] deserve to be next to Mario.

GamesBeat: I realize you can only speak for Nintendo of America, but how is Nintendo of Japan reacting to this?

Baker: Nintendo of Japan is really open to it, and actually, they have asked us, as well as Nintendo of Europe, to continue looking for quality indie content that may be appropriate for the Japanese market … and really try to help them get more exposure on what is resonating with a Western audience and how to introduce that locally within Japan as well. So I know that is an added initiative and something our internal teams are working on as well, and they are working on making more and more content available over there.

GamesBeat: What about the Japanese market having, essentially, a Japanese version of this initiative? Where you have Japanese indie developers getting onto the Wii U in the same way you have it happening here at GDC? Is something like that under consideration?

Baker: Well, they do have indie support, but it’s not like this huge initiative over there. They’re not putting a whole lot of visibility into it. It does feel more like a Western focus, and I think it is because it is resonating really well with a Western audience. I think on our side, we’re not really looking at it from that perspective. We’re looking at it as there’s all this amazing content out there and Wii U consumers deserve the opportunity to play it … especially if it is as easy as a simple port if they are using Unity, for example.

GamesBeat: Again, I know you can’t speak for Japan and that’s not really the focus here. But still, Nintendo of Japan makes a lot of the big call,  and I imagine if they don’t like what’s going on here.

Baker: That’s a really good point. Japan has a totally different market, and that indie theme we would bring to Japan … I don’t think it is as promoted or as evolved as it is over here … and so we’re at a point where we could educate them on what is happening over in the West and what is really resonating, so they can have that exposure … because they might not be seeing it first-hand in their own region.