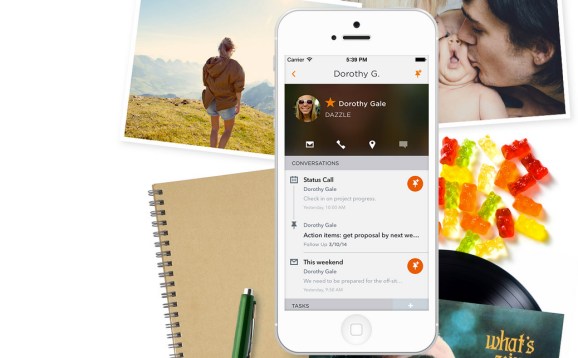 The Tact app for iOS.

Today, enterprise software startup Tactile officially launched Tact, a free iOS app for sales professionals that syncs data from email, LinkedIn, and Salesforce. Rather than bouncing around between all those different repositories, salespeople can use Tact as a central, mobile hub to manage their relationships with leads and customers.

Two forces are driving Tactile as a company, said Ganapathi: sync technology and a user-centric approach.

“The dirty little secret in this [$140 billion enterprise software] business is that there’s a massive user-adoption problem,” Ganapathi told VentureBeat. “We’re trying to reimagine business apps that put the end-user at the center of everything we do.

“We started by looking at what’s happening in our personal lives — software like Dropbox and iCloud — and drawing inspiration from that.”

Rather than selling to enterprises, Tactile distributes Tact through Apple’s App Store. Ganapathi described it as an app you could carry around from one job to another. But when you sever a relationship with a company, “you’re not taking any information that the company believes is theirs,” he said.

Tactile has been beta testing Tact for about a year. Around 10,000 salespeople synced data into the platform during that period.

The app mirrors the native iPhone experience, with tabs for contacts, conversations, and agenda. The conversations tab is a joint inbox that aggregates all of your calls, meetings, and notes.

“It’s a very simple way to balance and bounce between multiple client conversations as you’re moving through your day,” said Ganapathi. “Because everything is in one place, you can boost your productivity and bang them out one at a time.”

Tactile intends to introduce a premium version of the app down the road, but right now its focus is on getting the word out.

Tactile also announced $11.2 million in financing from Accel Partners and Redpoint Ventures today, though the company actually raised the round in the middle of 2012. It’s used that financing to develop its sync technology and the Tact app.

“We think sync is the future,” said Ganapathi. “We’re really trying to build a new generation of business applications into what we call the sync generation.”

And, at least by one standard, they’re doing a great job.

“In the last year, I’ve gotten a lot more emails with the word ‘love’ in it than the last 15,” said Ganapathi, chuckling.