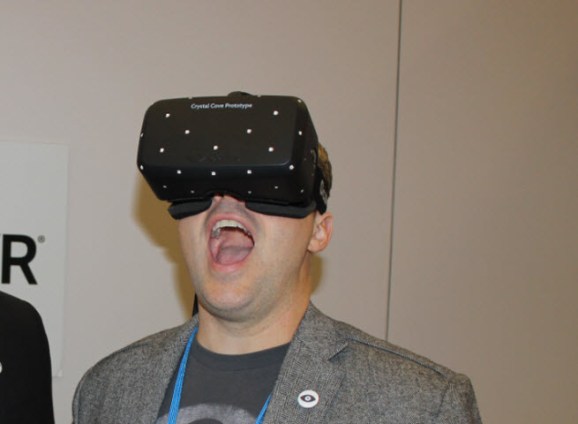 Tech companies have often boasted about having broader markets than game companies, while game makers brag about having the most engaged and financially lucrative audiences of all. Now Facebook’s $2 billion acquisition of Oculus VR will marry the social network with the hardcore tech and gaming. That’s a wake up call for anyone who thinks that the markets for tech, social, and gaming are completely separate categories.

In other words, this is a lot more than putting FarmVille into virtual reality.

The reality is that while gaming has always been viewed as a niche market, it has blossomed in the age of digital and Internet technologies to become one of the most sticky activities of all. And Oculus is working on a technology that, in its grandest ambitions, could turn everybody into a gamer. On top of that, it could lead to applications that are entertaining without having anything to do with games. The deal has the potential to weave the once separate futures of gaming, social networks, and computing into one. After all, who doesn’t want to play around in the equivalent of the Star Trek Holodeck, where it’s hard to tell the virtual from the real.

“With Oculus, there are not that many companies that are building core technologies that can be the next major computing platform,” said Mark Zuckerberg, chief executive of Facebook, in a press call after the deal was announced on Tuesday.

Brendan Iribe, CEO of Oculus VR in Irvine, Calif., echoed Zuckerberg’s comments about the broader nature of the gaming technology.

In an interview with GamesBeat, Iribe said that Zuckerberg was fascinated by the technology and asked to see it. He got along well with Iribe, founder Palmer Luckey, and executive Nate Mitchell. He visited Oculus for an extended demo and then asked how he could help. Iribe and team wanted to figure out a way to accelerate the acceptance of virtual reality among the masses. The idea for an acquisition came up and the deal was struck in three days.

“That’s how accelerated it was,” Iribe said.

The companies are a long way away from making their vision happen. Oculus will probably live or die based on how well it serves gamers. If it succeeds, then it can expand to satisfy virtual reality fans in entertainment (virtual cinema), education, healthcare, and other areas. And Facebook didn’t care so much about making money on the hardware. Since it makes money in other ways, it can launch the best-in-class virtual reality headsets for cost, Iribe said.

The combination of the tech, game, and social network industries has already been happening. Facebook rose to popularity on the strength of social games from companies like Zynga. Smartphones and tablets have taken off thanks to the tremendous popularity of the app stores, where most of the revenues come from games.

If virtual reality works properly, it just might bring socialites and geek gamers — the stereotypes that are inescapable — together. The gamers can enjoy the immersive experience of being in a virtual world. The socialites can chat with friends and watch virtual cinema together.

Many platform owners have minimized the importance of games. Steve Jobs started his career making a game, Breakout, with Steve Wozniak for Atari. But he grew to detest games and rarely acknowledged its contributions to the bottom line of Apple. In that way, the platform owners seemed to behave like accidental gaming empires. The intentional gaming empires — Sony, Microsoft, Nintendo, and Valve — were perfectly happy owning the gaming market. But in recent years, the accidental empires have shown the capacity to disrupt traditional gaming. After all, a free-to-play game is a lot more accessible than a $60 console game.

The initial public offering of King reinforces this point, as King’s Candy Crush Saga is one of the most accessible games ever made with 97 million daily active users. It is a huge game, and evidently hot enough to enable King to go public at a $7 billion-plus valuation.

Until now, Facebook has been a company that has been a lot broader than gaming. It acquired WhatsApp for $16 billion-plus to move into mobile messaging networks, which are replacing text messages and email. The Oculus deal is about a technology that will come in useful in the future.

Now Facebook-Oculus will compete directly with Sony, which showed off its virtual-reality headset, Project Morpheus, last week at the Game Developers Conference in San Francisco. Those who saw Sony’s tech felt like it was behind Oculus VR’s, but Sony is good for Oculus because it is sure to push the technology faster as a result of a competitive maelstrom. Facebook is likely to accelerate the technology further.

Also at GDC last week, Oculus debuted its Oculus Rift Development Kit 2, which fixed many of the problems associated with gamers getting seasick from the motion of the headset. I wore the DK2 headset, and it didn’t make me nauseous at all. Some 75,000 people have worn the headset, and many of those have bought developer kits to make games for the platform.

While the Rift isn’t perfect, the thing that Facebook and investors saw was that it was making rapid progress toward its goal of creating an immersive, believable experience. The DK2 got rid of motion blur, one of the primary problems that contributes to motion sickness. Still to come are a graphics solution that gets rid of pixellation, or the notion that you are looking through a screen door at the world, and a solution that works well with your hands, such as the Sixense motion controllers.

“The Oculus product that they have now is way ahead of anything else that’s out there,” Zuckerberg said. “Sony I think has demo’d something very early, and Microsoft hasn’t even gotten to the point where they have something to demo yet.”

“Unlike the Microsoft or Sony pure console strategy, if you want to make this a real computing platform, you need to fuse both of those things (gaming and social) together,” Zuckerberg added. “That is opportunity that we saw in working together, to transcend the traditional console opportunity to really make it more of a ubiquitous computing platform.”