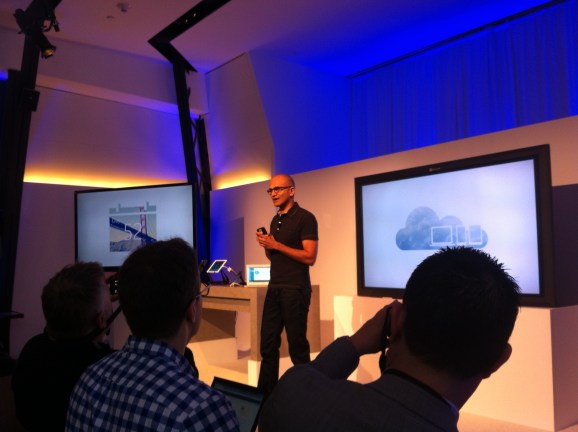 Under a freemium business model, Microsoft will provide reading and presentation features for free in its new iPad app. People with Office 365 subscriptions will experience full access to the suite. Microsoft also introduced an Enterprise Mobility Suite for IT to manage devices using Office.

It’s all about bringing together mobile and the cloud, and it’s part of a list of innovations for Microsoft, said the company’s newly minted chief executive, Satya Nadella, at a Microsoft press event here this morning.

CloudOn, which makes mobile productivity software, had previously brought Office to the iPad as well as Android phones.

For years, reports have circulated that Microsoft would make Office available on the iPad, freeing up word-processing, data-storage, and presentation applications from the Windows operating system.

These days, Apple throws in its own software for those tasks — Pages, Numbers, and Keynote. And because Microsoft’s own Surface tablet isn’t a sales hit, it’s important for Microsoft to bring its familiar apps to the widely adopted iPad.

In fact, you could easily argue that Microsoft should have made this move a while ago.