There’s plenty that device maker HTC needs to prove this year — but its refined design sense is not one of them.

With the new HTC One (M8), its latest flagship smartphone, HTC has thrown down the gauntlet on smartphone design. Its metal case looks more like it came from a high-end car than a phone. And compared to competitors like Samsung, which still rely on plastic for their gadgets, it’s as if HTC is working on an entirely new level.

But much of that was also true for last year’s One, and yet it wasn’t enough to lure consumers away from their iPhones and Samsung Galaxies. With this new One, HTC needs to prove that its killer design sensibility can also make consumers pay attention.

At the One’s launch event on Tuesday, I had a chance to speak with Jonah Becker, HTC’s associate vice president of design, and Drew Bamford, HTC’s lead software designer. As you can imagine, design was a big focus of our wide-ranging conversation. 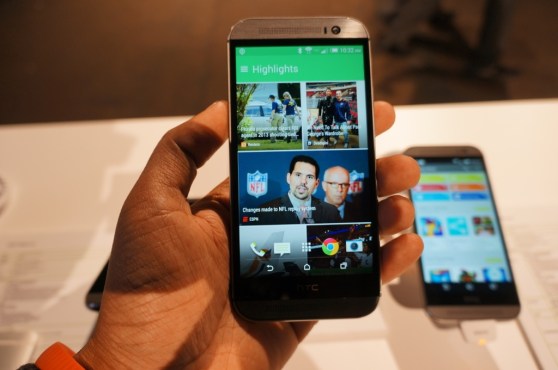 VentureBeat: What was your biggest focus when designing this new One?

Jonah Becker: From a hardware perspective, last year was definitely a big leap for us. Going to this metal unibody construction, we learned a lot. But by no means were we done with that learning. We learned so many things about how to create this sort of structure, what sort of finishes we could apply.

What you’ll see with the HTC One (M8) is that we’ve taken that metal construction even further. Now the metal wrapping goes all the way around the product. [Last year’s model used plastic on the sides to bridge the front and back of the case.]

We were able to just push that technology even further. From a design standpoint, to be able to simplify the construction, and at the same time bring more consistency and a more premium feel that you get from having the metal continue all around, is really great.

VentureBeat: Is the new phone lighter? It felt a bit more comfortable in my hand than the old One.

Becker: We absolutely do everything we can to make the product feel as light as possible. At the same time, we want to balance it out with making sure that it’s solidly built. It is a larger display, so it’s not necessarily a direct comparison in terms of weight.

VentureBeat: What did you guys learn with the new Sense software you rolled out for the One last year?

Drew Bamford: One of the things we did a lot of work on was the new Blinkfeed. [Blinkfeed is a part of the Sense software that adds a news feed right on the Android home screen.] A lot of the new design was driven by feedback we got from customers. For example, one of the things we noticed from the original Blinkfeed was that a lot of people just liked to scan headlines and look at the photos, rather than dive into the articles.

So the new version is totally optimized for that kind of really light-snacking behavior. It’s got free scrolling; there’s a new layout where the images are even larger; and the headlines are longer.

VentureBeat: I saw that you’re finally opening up the Blinkfeed to third-party developers. This was something plenty of people were expecting last year. Did it take longer than you thought?

Bamford: It took a little longer than we thought. Last year we primarily focused on getting new content providers. We have over 1,000 now. This year we’re focused on getting local apps — if you download an app to your device, you’ll be able to get direct updates from the app published in your Blinkfeed.

VentureBeat: What was the most difficult aspect of iterating on last year’s design?

Becker: It’s very important for us not to just sit back and play it safe. What we were really trying to do is balance this idea of establishing a strong identity for the One family, building on the success of the design language from last year. … We need to keep pushing ahead, we need to take risks. We know that we want to deliver the best quality product. We’re willing to put in the work, take the risks, and fail throughout the course of the year and learn from those failures until we get things right. 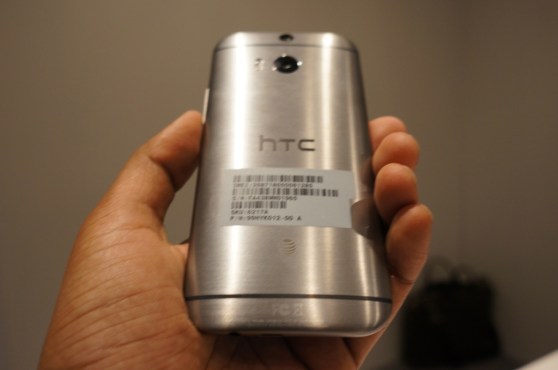 VentureBeat: What inspired you guys to implement the dual camera setup? I also saw from some of the reviews that there are still issues with the camera, especially around its photo quality and dynamic range [something reviewers pointed out with last year’s One]. The dual camera doesn’t seem to solve that problem.

Becker: For us there are a couple things: One, we’re always looking at what the high-end cameras do. Not phone cameras, but the best cameras. One of the things you see is this amazing quality you get from using real lenses and getting that amazing depth of field effect. We’ve looked at trying to do those sorts of things with software, but the reality is that solving it with hardware is the only effective way to do those things. [The new One’s depth-sensing camera allows you to focus anywhere on a photo after you’ve taken it.]

We have camera people — one of the people on our design team used to be the creative director at Kodak. … We’re looking at the types of experiences we want to enable and figuring out how to solve those. The dual camera is one of the things we’ve worked out with our optics thing.

VentureBeat: Is the main camera sensor the same Ultrapixel sensor as last year?

Bamford: It’s actually a new module with the same number of pixels [4MP] and the same size of pixels, but with new firmware that will give you better results.

VentureBeat: There was some criticism of last year’s camera — many found that the camera wasn’t as sharp as some others because it didn’t have as many megapixels. Was that something you thought about?

Bamford: We thought about that, but we still think it’s the best balance. What we’re trying to do is solve for the most frequent use cases. A lot of people are taking photos indoors in dim lighting, and we really want to optimize for that.

VentureBeat: Can you talk about creating the software for this dual sensor camera? This isn’t something that’s been done before.

Bamford: We worked a lot with our camera team to understand what was possible from this sensor and then really design it from the user standpoint. … One of the things people want is that depth-of-field effect, which you could previously only get from a DSLR. …  Then we started brainstorming and came up with different kinds of effects we could apply to the background, as well as mask out the foreground.

We’re at the beginning of the possibilities for that, which is why we’re opening up an API to let third parties use our depth map that we’re capturing with the dual camera, so they can do things we didn’t even think of.

VentureBeat: I’m glad to see the BoomSound speakers this year are louder. How did you guys go about designing that?

Becker: If you look at last year’s, I think there was a significant difference between Boomsound and other phones on the market. We looked at the idea that speakers on phones have traditionally been on the back, and that was purely for ringtones and notifications.

We started noticing people playing YouTube videos on the back and cupping their hands behind the phone [to make it louder]. We feel like the sound quality last year was quite good, but with the new amplifier and new DSPs, improving the volume of the front-facing speaker makes it even that much better.

VentureBeat: There wasn’t really much talk about the processor, or the amount of RAM the phone has. Is that as interesting to you guys as all the other features?

Becker: To some extent, there’s a bit of a technology plateau. Our approach from a hardware design and UX standpoint is to be very human-centric. We’re interested in those experiences that resonate with people in their daily lives. … We put more of our energy as a design team into those areas. Certainly, we have teams that are working on the specs for everything else. But our passion is the human element of the design.