The Internet of things is forecast to achieve a $20 billion total available market by 2018.  But is that market size real? What are the tools that we can use to understand this and take effective action?

The Internet of things is inarguably here already for innovators and early adopters, and seems to be in a state similar to where mobile was seven years ago.

In 2007, the iPhone had not been launched and mobile technology was proliferating but fragmented. The power of the iOS/iTunes platform business model provided the unification that vaulted mobile across the chasm. It’s not yet obvious what that unifying force will be in the Internet of things, but hints are showing up.

For there to be a market in the Internet of things, two things must be true:

1) The “thing” in question must provide utility to the human, and

2) The digital shadow must provide value to an enterprise.

From the data streams that implement the “digital shadows” of people, we can use predictive analytics to understand their needs and behavior better than ever before. Every new dimension of data increases the predictive power, enabling enterprises to answer the question, “What does the human want?”

This informs business operations just as much as it informs customer engagement.

There are overhyped areas like Google Glass, where public reactions have shown that there is a large leap of social convention required to accept ubiquitous invasions of privacy. Conversely, there are areas of business innovation which are completely under the radar, yet which represent stronger drivers of the Internet of things than consumer demand.

In the case of auto insurance, the first quality could be a connected accelerometer offered to drivers to improve their insurance rates based on proven safe driving habits.  Through this digital shadow, the insurance provider can make much better actuarial predictions than through the coarse-grained data they had before about age, and traffic violations.

But the second aspect is much stronger: the ability to transform the insurance market to better meet the needs of customers while changing the rules of competition. Based on real-time driving information, insurance companies can move to a real-time, spot-pricing model driven by an exchange (not unlike the stock exchange), bidding on drivers and providing insurance on demand.  Not driving today? Don’t pay for insurance. Need to drive fast tomorrow? Pay a little more, but don’t worry about your permanent record.

These outcomes are all based on tying the Internet of things to predictive analytics. These forces will not be friendly to the insurance companies that are late in the technology curve. They will be left out of a transforming market in the way that ad brokers were left out when Google transformed advertising.

In the case of health care, the first requirement is similar: a wearable accelerometer offered to patients to improve traceability of their compliance with their exercise prescription, enabling better outcomes for cardiac patients. Unlike prescription refills, exercise compliance has been untraceable before, so this digital shadow is a breakthrough for medicine. Similar developments exist in digestible sensors within medications which activate only on contact with stomach acid, providing higher truth and better granularity than a monthly refill.

The second need, the ability to provide value to the enterprise, in health care is not yet known, but the ability to combine multiple streams of information that were previously invisible has the potential to drive better health outcomes through provably higher patient compliance. Sorting these data streams at scale will allow health providers and health insurance companies to rapidly iterate health protocols across a population of humans, augmenting human expertise with predictive analytics. Outcome-based analysis based on predictive models built from data can reduce waste, error rates, and lawsuits while driving better margins. Larger exchanges of this type of data will tend to perform better, creating a more effective market and a better pool of empirical research for science.

There are still multiple bottlenecks ahead that block the fluid progress of the Internet of things. A coherent programming model for large networks of “dumb” devices does not exist. Behavioral analytics and the tooling required to make the digital shadow coherent are nascent and require PhD-bearing data scientists to operate them.

But one thing is clear: Innovation in the Internet of things will be driven by global enterprises that can invest in “things” at enormous scale in order to gain the benefits only achievable by organizing enormous quantities of data and applying it to their business.

In this light, is the $20 billion market estimate defensible?  Like any forecast, this one represents sophisticated guesses backed by spreadsheets. They tend to be top-down, looking at spending displacements and discount-driven disruption based on history. They rarely capture the new value generated by new business models.

In 2000, before we understood how Google could monetize predictive analytics to advertise to the Internet of Websites, what would we have guessed as their total market? 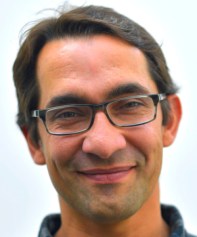 As vice president of strategy at Apigee, Sam Ramji has some 20 years of industry experience in enterprise software, product development, and open source strategy. Prior to Apigee, he led open source strategy across Microsoft, where he and his team contributed code to the Linux kernel. He was a founding member of BEA’s AquaLogic product team. Sam is a member of the Institute for Generative Leadership and holds positions on the boards of the Outercurve Foundation, on the Open Cloud Initiative, and is a contributing editor to the ACM’s journal Ubiquity.