More than seven years ago, a Canadian hardware firm teased a virtual-reality headset for Xbox 360. It has now resurfaced just days after Facebook acquired the leader in VR.

The company is True Player Gear, and its virtual-reality headset looks a lot like the competition from Oculus VR and Sony. The unnamed device straps to a player’s face and presents them with a 1080p OLED display that takes up a 90-degree field of view. It will also work with Xbox One, PlayStation 4, Xbox 360, PlayStation 3, PC, and Mac, according to True Player Gear president Bertrand Nepveu. The Montreal-based technology company first teased its VR unit during the 2007 Electronic Entertainment Expo, but it never emerged as a consumer product. Now that Facebook has dropped $2 billion to purchase Oculus VR — makers of the Oculus Rift VR helmet — True Player Gear is back on the scene to talk about all of the things its hardware can do.

The device, which does not yet have a price or a release date, separates itself from the Rift and Project Morpheus by working with more than one platform as well as by supporting older games not optimized for VR. Additionally, the head-mounted display has its own lenses that players can adjust so that they don’t need to wear their glasses or contacts, and this also makes text in games more visible.

“Yes, it is happening,” Nepveu told GamesBeat. “We finally have all the technologies we need.”

The True Player Gear boss told us that he has had talks with Microsoft and Sony about getting software support on their devices, but it isn’t necessary thanks to its ability to function with existing software.

“Our system is based on emulated controls,” he said. “We emulate the thumbstick for headtracking.”

“Of course, it would be better to have native support,” he said. “If you want a great VR experience, the game will need to be designed for VR in mind. This is just a way to try your existing games in VR. The experience will depend on the games. Some are good. Some are bad.”

True Player Gear’s device also has two cameras so that players can see the outside world at any time. The company will also use this to create augmented-reality games. Finally, the hardware features its own built-in processing power to lighten the load it would put on a PC or console.

While the unit does have a lot of cool features, it’s missing the camera-based positional tracking that Rift and Morpheus are using to amplify the sense of presence. Also, Nepveu was unable to provide us any video of the device working. All we could find is this video that True Player Gear debuted in 2007:

We asked Nepveu where the device has been for the last seven year, and he said that they’ve been prototyping. The current revision is the fifth generation of the hardware, and he provided us with this picture of him showing off an early revision at the Consumer Electronics Show in early 2013: 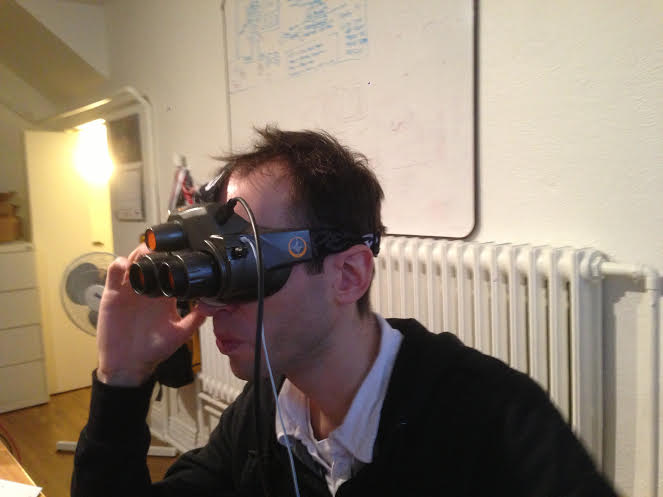 Above: The CES 2013 prototype of True Player Gear’s VR headset.