That’s the idea behind the AirBulb, whose developers just started a Kickstarter fundraiser to make this dream a reality.

Screw this bad boy into a lamp or overhead socket, connect your phone to it via Bluetooth using the included app, and you can pump tunes into your room — as well as control the color of the LED lighting, set a music-and-light alarm, or strobe the light when you get an incoming call.

The app will let you connect your phone to one or two AirBulbs, supporting stereo audio when you’ve got two connected. You’ll control the music, and its volume, through the AirBulb app. The speaker is a mere 3 watts, which won’t provide ear-splitting volume or thumping bass for your next party, but should be plenty to keep you entertained if it’s screwed into a bedside lamp or a light next to your favorite reading or gaming chair.

The LED lights aren’t multi-colored disco lights, but rather a two-tone setup, offering two modes: “cool” and “warm” lighting. You’ll be able to control the lighting color, or turn the lights on and off, via the app as well. (Or just use the regular wall switch or lamp switch to cut the power and turn the device completely off.)

The project is still in development, with a beta version of the app, a prototype of the bulb, full schematics, and a bill of materials for starting their first production run. The makers say they need the funding to begin tooling and manufacturing with the Chinese factory they’ve identified, and that if they receive funding they’ll begin production in August and complete shipments by the end of 2014.

Just one day into the project, it’s already raised $59,000 in pledges towards a $100,000 fundraising goal, so it seems like a good bet that this will get fully funded.

This isn’t the first time someone has integrated an audio speaker and a lightbulb: Klipsch’s LightSpeakers have been around for about four years, and offer 20 watts of power instead of just 3 watts. (I thought the LightSpeakers were pretty decent when I reviewed a pair in 2010.) But the AirBulb will be Bluetooth compatible, and you can get one for just $69 (or $109 for a pair) with a Kickstarter pledge, while Klipsch’s product costs $600 a pair.

AirBulbs will support Bluetooth 4.0 as well as Bluetooth 3.0 with A2DP, AVRCP, HFP, and HSP support. 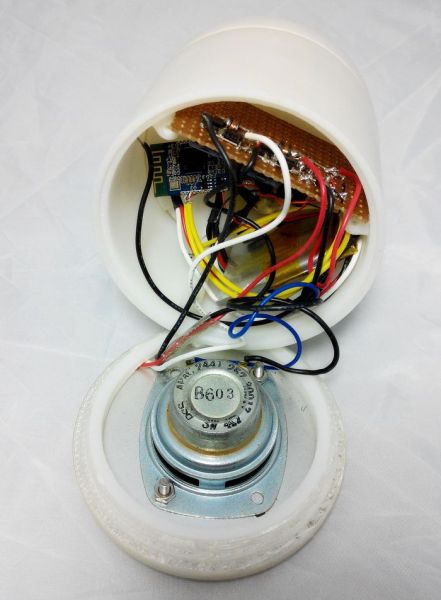 Above: Electronics packed inside the AirBulb.