Supercell, maker of the insanely popular Clash of Clans and Hay Day, is aiming for a third gargantuan mobile-gaming hit with Boom Beach. The free-to-play title has been out for less than a month, and it has climbed to No. 2 on the iOS free-apps rankings.

The game should be a good test of whether Helsinki, Finland-based Supercell, which had $892 million in revenue last year from just two games, will become a hit factory amid a sea of one-hit wonders. Clash of Clans was so huge that SoftBank invested $1.53 billion in Supercell last year at a $3 billion valuation. 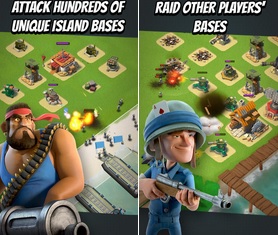 Above: Boom Beach is the No. 2 free app on iOS.

Boom Beach resembles Clash of Clans in terms of gameplay, but the newer release is set in a fictionalized World War II-style universe. Rather than raiding Viking villages, you attack island fortresses created by the Nazi-like enemies or those of your friends. That seems like a description for a hardcore game. But, like Zynga, Supercell uses a cartoon style for its characters, which makes them more broadly appealing.

The game has two-dimensional graphics, but they look pretty, with translucent, 3D-like waves crashing on the beach. You set up defenses and production. Then, you try to grow. Enemies attack your base, but you can join a clan to get more protection. The attacks are asynchronous, which means they happen when you are not online. If an enemy destroys all of the buildings in your base, they win the battle. If you defend successfully, then you win. You can expand your island empire by taking over other islands in a big tropical archipelago.

Boom Beach has its own storyline to keep players engaged. The enemies are known as the Blackguard. You have to discover why they are enslaving the natives in pursuit of ancient statues and life crystals. They have fearsome bosses and diabolical plans.

Boom Beach has that Supercell touch, as it focuses on some uniquely fun touchscreen mechanics. You have landing craft full of soldiers that you can send at an invasion beach. You can also pound the ground defenses with your gunboat. The sound of gunfire and crashing shells are loud, and the music is whimsical. You can continuously upgrade your buildings and troops. Those are just the sort of characteristics that have kept Clash of Clans riding high.

But Clash of Clans, which launched in mid-2012, rarely shows up in the top-free-apps list. Rather, it dominates the rankings of the top-grossing games, which don’t always get downloaded the most but monetize extremely well. Clash of Clans is a free-to-play title, but it generates a lot of revenue from in-app purchases. That’s because players like to get revenge against others who attack them. And they’re sometimes willing to spend for that privilege.

With Boom Beach, the monetization scheme is similar. But the game is more interactive than Clash of Clans, where you mainly focus on choosing which units to attack with and where to attack the enemy’s defenses. With Boom Beach, the addition of the gunboat allows you to select a strong point, like a machine gun nest or sniper tower, to pummel with shells. You can only fire the gunboat a couple of times, and then your troops have to attack. If they destroy more buildings, then you can fire more gunboat shells.

You can also direct flares at certain targets you want your troops to attack, but you only get so many flares. So, the player is much more involved in the action of Boom Beach than in Clash of Clans. The only problem with the combat system right now is that the troops are too dumb to attack the weapons that are firing directly at them. They will simply attack the nearest building.

The greater interactivity could bode well for Supercell, which has so much money coming in from Clash of Clans, ranked No. 1 on the top-grossing list on iOS, and Hay Day, which ranks No. 7 on the top-grossing list. Supercell can afford to advertise Boom Beach at advertising rates that other developers can’t afford. And with improvements in mobile-ad targeting, Supercell can have an easier time reaching the right players with ads.

Boom Beach has a 4.4 out of 5 rating on iOS. If the game’s appeal is anything like Clash of Clans, it will likely get a huge following. So far, Supercell’s performance is awesome for a company that has around 190 or so employees. By comparison, its revenues were almost as large as Zynga’s last year, but Zynga has more than 2,000 employees.

Some of the reviews coming out are pointing to one flaw compared to Clash of Clans. There is currently no communication system inside the game that allows players to coordinate their attacks against certain enemies. Perhaps that feature will come later, but for now it is a big hole.