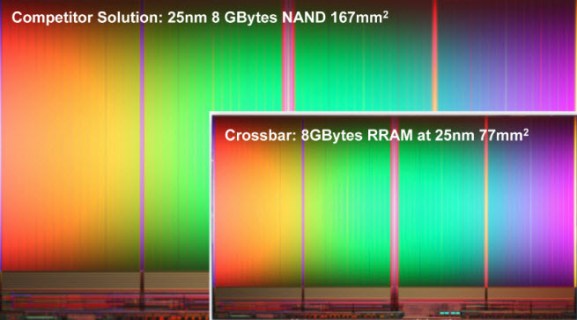 This is how Crossbar's chips stack up to flash memory

The race is on to develop new types of memory chips that can keep up with our dual desires for more data storage and tinier gadgets.

Crossbar, a company that has developed custom Resistive RAM technology, is one such entry in this latest memory market. The company announced today that it has raised $25 million in a third round of funding, bringing its total funding to $50 million.

Resistive RAM, or ReRAM, is one of many new technologies targeted at destroying the $60 billion flash memory market. Crossbar’s technology, which uses a unique layered structure, can fit a terabyte of data on a chip the size of a postage stamp. Even better, it can access that data 20 times faster than today’s best flash memory.

“With our working Crossbar array, we have achieved all the major technical milestones that prove our RRAM technology is easy to manufacture and ready for commercialization. It’s a watershed moment for the nonvolatile memory industry.”

After emerging from stealth last summer, Minassian says the Santa Clara, Calif.-based Crossbar is now in “active negotiations” with electronics and semiconductor leaders. The company plans to use the new funding to build out its manufacturing and licensing operations. Crossbar says it will announce licensing agreements with semiconductor firms later this year.

It’s easy to see how Crossbar’s technology could be useful with the move to wearable devices, thinner smartphones and tablets, and a plethora of other connected gadgets. Though flash memory has made great strides over the years, it’s a technology that is beginning to show its age, especially when we’re seeing new technologies like 4K video emerge which require fast data bandwidth and huge storage capabilities.