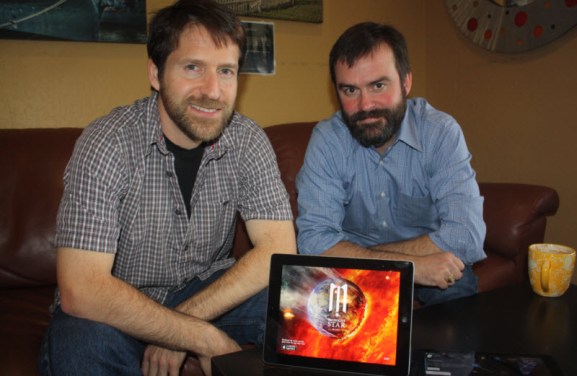 Industrial Toys, founded by Halo co-creator Alex Seropian, is announcing today that it has raised $5 million from Accel Partners. Industrial Toys is hard at work on Midnight Star, a free-to-play shooter game designed from the ground up for tablets.

Above: A cinematic close-up in Midnight Star.

The bet is that hardcore gamers will migrate from console games to tablets, and those gamers will want hardcore content on their mobile devices. Some critics believe that mobile platforms aren’t ready yet, but Seropian noted that critics once said that the consoles weren’t ready for shooter games like Halo. And they were wrong about that.

Accel is no stranger to game investments. It previously invested in Rovio, maker of Angry Birds, and Supercell, creator of Clash of Clans. The company is making a wager on Seropian, the founder of Bungie Studios (maker of the Halo games that have sold more than 50 million copies on the PC and consoles), and his co-founder Tim Harris, president of Los Angeles-based Industrial Toys.

Industrial Toys plans to launch its first game, Midnight Star, in beta testing this summer. The game will be preceded by the Midnight Rises graphic novel, which will set the backstory for the game. The aim is to combine good storytelling and top notch game mechanics in a game that hardcore players will enjoy for hours and hours.

“Our plan is to build something with a permanence to it,” Seropian said in an interview with GamesBeat. “It seems obvious to us that core gamers will move to mobile.”

It makes sense for startups to target the mobile game segment, which market researcher Gartner expects to double from $13.2 billion in 2013 to $22 billion in 2015. But game makers have had a hard time creating successful first-person shooter titles on touchscreens, which are much harder to use for controlling 3D games in comparison to game console controllers.

Industrial Toys previously had angel funding. But Accel is familiar with games, having invested in companies like Playfish, Gameforge, and Mind Candy.

“This investment is about the game,” said Vas Natarajan of Accel Partners in an interview. “They have a vision and focus on quality. They made their first product on a scrappy budget, but it is going to be very polished.”

Natarajan said, “We have been humbled by our successes in gaming. We are very active from a gaming perspective and saw the opportunity to take advantage of bringing core gamers into mobile gaming. It is an underserved market.”

Seropian said the company has 20 employees and will likely add more.

“Real gamers want to compete, explore, and become part of a community. We need a storyline we can sink our teeth into and quality that mirrors what we’d expect from a PC and the console – but with gameplay design specific to next-gen devices,” added Tim Harris, president of the company.

Asked how soon the company will be done with its game, Seropian said, “We’re real close. We should go worldwide this summer.”

He added, “We have learned a lot from our beta testers who have put 50 hours into the game. We are rolling those learnings back into the game.”

Above: A ship in Midnight Star.

The graphic novel is cool, but the project will live or die on the game’s quality. The team working on it includes cofounder Brent Pease, Harris, and console game veteran Mike Dekoekkoek. The game is being built on the Unreal Engine 3 game platform.

When you make contact with the aliens, the fighting starts. To shoot an alien, you touch it on the screen. Your character aims, and a reticule appears on the creature. You hold it down to fire and use your finger to follow the alien as it tries to dodge or hide. If you hit the alien enough times, you kill it. You do this over and over until you clear a section in about two minutes. A short firefight enables you to set it aside and go on with your life, in case you don’t want to spend hours playing a single game session.

You use some of the 14 guns in different ways. You can pinch the screen, as if you were viewing a photo, to zoom in on a target with a sniper rifle. You tap the head to try to get a headshot. The more headshots you get, the greater the points you rack up. If you press two fingers on the screen, you lay down a shield to protect your character.

You can pull out tricks like a levitation power that makes the aliens float in the air. You can pick them off until the power wears off. The mechanics are simple, and they don’t require you to do things that are just too hard to do on a touchscreen.