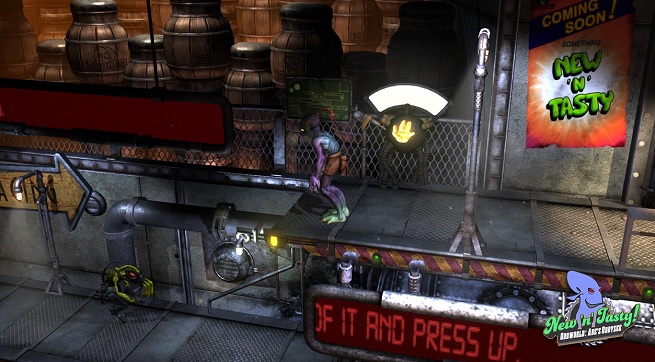 GamesBeat: Did you have to create a lot of new assets in the process?

Lanning: It’s basically all new, but we were able to amortize. As I say, we archived, in the beginning, in 1997 $2 million or $3 million worth of assets. Getting those off was an experience, because they were all robot drives, barcoded. Nobody’s even using those anymore.

Bringing those in gave us a template, where I didn’t have to sit there with everyone going, “That’s not what Abe looks like. You need to move the eyelid there.” We had the template for those models. They weren’t compatible data, but they were high-res enough. In the first game, if you remember, we pre-rendered all the bitmaps. It was all built at what, in the day, would have been considered film res. This was before Toy Story was released. It’s crude relative to a CG film today. But our assets were at that level.

We were able to bring all of those in from the original game to model dimensions, texture maps, get all that. We had to build new realtime data, but having those templates saved a huge amount of art direction, the normal process of building new assets. Fortunately, the artists are really passionate guys. It’s not like I’m in there going, “This scene doesn’t have enough detail.” It reminds me of the original crew, how passionate they were about crafting this kind of visually palatable, highly stylized experience.

Bringing those assets in, I think we amortized a couple million dollars of value there. Then have about $2 million in the project, is what it’ll total out to. We’re bringing much more than $2 million worth of content, and then the wisdom of knowing how to do it, that gave us a pretty good curve.

GamesBeat: Who will be handling the publishing work?

Lanning: We’re self-publishing. With Sony that’s a breeze. With Steam it’s a breeze. With Microsoft it’s not a breeze. With Nintendo, something’s going to happen there shortly. Even on the Wii U, though, how many people did buy it? It’s kind of how we looked at Vita in the Christmas of 2012. We did Stranger HD on Vita, and the publishers were kind of snubbing Vita at the time, because there wasn’t enough installed base to move their dial. We said, yeah, but that small base is pretty passionate. They invested and they want good experiences that are designed to maximize that control scheme. Why don’t we spend a little more time and attention – because we’re small and we can – and a result we took number two in the U.S. and number one in Europe that Christmas on Vita.

That’s not selling millions of units, but the way we’re looking at it, it gets us into a pool of users on a specific device, of which so far we’ve had zero on Nintendo. We’ve had zero brand visibility on Nintendo since day one. We never built for Nintendo. Today, we’re looking at it and we say, “We’ll get over to Wii U. As a business model it might not completely make sense, but we want to get to work on Nintendo, get to self-publishing on Nintendo. Everything’s a new store. Everything’s more shelf space. We’re trying to get the brand across that as widely as possible.

Then we also got Stranger on mobile, which was bizarre. You know the Square One guys, who did Bard’s Tale on mobile? They’re in Vancouver. They’ve been doing it for 20, 25 years. They’ve been burned. They’re tired of the old bullshit. Now they have a new business model where they say, “We’ve built a great mobile tech platform. We can absorb technology like your engine and make that run on mobile.” I’m like, “Sure you can. Even if you can, you’re not gonna solve the interface problem with something as complex as Stranger’s Wrath.” But they did it. 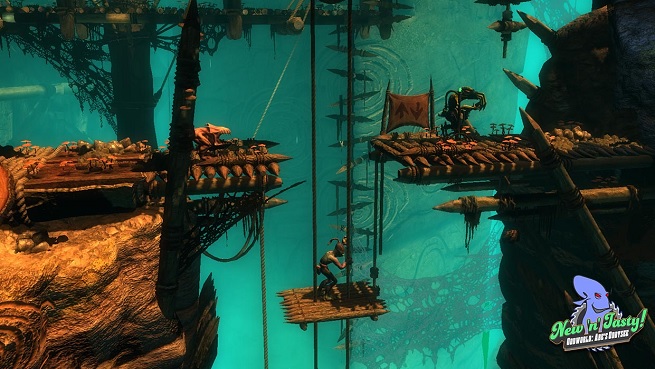 I just signed, the other day, to let Nvidia, AMD, and Qualcomm all use this as a demonstration at the GPU conference. These guys are pushing OpenGL 3 class rendering on the mobile devices.

Their business model is—Brian Fargo contacted me and said, “These guys just did a great job for me porting Bard’s Tale from console to mobile. Now we’re selling more units on mobile than we did on console. Their price point is $4.99, so it’s not free-to-play. It’s not getting into the slickness of that. It’s more about custom-crafted experiences. People want more triple-A than they’re getting. There’s a market for that if the price of development is right.

Our business model is pretty small-time now. We don’t need the same amount of units to succeed, but we need to be smarter in how we spend our money. Working with other indie groups, smaller groups, I really like it. We’re able to say, “We have the brand. It has some visibility and a certain standard of quality. If you want to do something with us in this way, propose to us. What market segment do you know? Who’s your user base? How do we work together on that?” I’m not going to run around saying, “Hey, here’s a new project I want to do at your studio.” I don’t want to do that. But it’s working out.

GamesBeat: As far as the process of publishing your whole library as digital downloads, is this the end of that process, and you go on to new IP? What’s your next move?

Lanning: I said something the other day to Eurogamer, and there were a lot of discussions up there. I said what the price point we’re targeting is, which is $29.99 for this one. That blew up a bit, because people expect $19.99 or lower for indie. But they’re not expecting an indie production worth several million dollars, with really good production values. There’s this whole discussion about the middle tier, which is totally non-existent right now. What’s between triple-A and indie?

But back to your original question, what I also said was, at 250,000 units we’d do this with Exoddus, the same thing. But that’s not blazing new creative territory. With 500,000 units, we’d finance Fangus Klot. I’ve designed it out extensively over the last 18 months. I’d love to build it. But that’s $5-6 million to build it. In that model, we’re delivering a smaller package earlier to an audience that grows over time. Call it DLC or whatever, but it expands in that way.

At 500,000 units we’d make enough money to finance truly new IP, but I don’t think we can do new IP in the Oddworld brand with what I think the audience expectation is for $2 or $3 million. I don’t think we can do what people can expect from us, having been triple-A and delivered at different levels at different times. There are ways you can launch new content today, certainly at cheaper price points. In the free-to-play market you’re probably doing it for a few hundred thousand, like Tencent and these guys.

For us, we’ve almost reached the end of exploiting the existing titles across wider bases, which we should have always done originally, but time and reality — We’re at the end of that. The last one would be Exoddus, which is taking a product that we could re-treat in a fresh new way, 20th-century classic gaming renewed with 21st-century technology. Then you pump the emotional factor — the voices, the humor, the emotional entertainment value. That’s what we’re focused on pumping up here, and having it play smoother and faster.

The new stuff I want to do, but I want to finance it. I don’t want to go have partners, for obvious reasons.