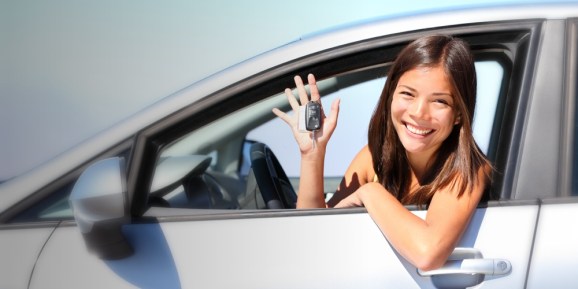 Want to sign up to be an Uber or Lyft driver but don’t have a car?

No problem, there’s a way around that.

Breeze, formerly known as ZephyrCar, is launching its new brand today. Essentially, Breeze is a car rental service for would-be Uber, Lyft, and Sidecar drivers, providing them with customized and relatively low-cost access to a car to use for their driving job and even personal use.

Since its creation a few months ago, the company has been laying relatively low. But it says it already has 25 vehicles on the road and plans to be in 20 cities by the end of 2014.

Drivers first apply to Breeze. The company gives them a “behavioral assessment” (checking for things such  as commitment to working as a driver, being responsible for the car, respecting schedules, and so on) and if accepted, Breeze matches them with one of its vehicles. After this, the driver goes on to apply to the ride-sharing companies.

Breeze uses algorithms to match drivers to vehicles as well as with each other — for example, it would match two drivers that live relatively close to each other and with complementary driving schedules such as one driving on weekdays and the other preferring to drive on weekends.

This is also important because the ride-sharing companies collect and even display to riders the license plate and car descriptions to riders, so Breeze’s drivers need to be able to use the same vehicle each time they are on the clock.

This is exactly how the taxi industry works — taxi drivers rent cars from the companies and pay a “gate fee” of about $120 per day. Breeze charges $20 per day, plus 25 cents per mile.

Breeze asks its drivers to get their own car insurance, then reimburses them for it after the it determines if the plan is comprehensive enough. In some cases, the company helps its customers choose and apply for insurance.

This emphasis on strong car insurance is presumably also important to Breeze because of the recent accidents involving Uber and Lyft drivers.

Going from an idea to a fleet of cars

Breeze’s co-founders, Jeffrey Pang, Charlie Fang, and Ned Ryan, came up with the idea after spending some time working for Uber and Homejoy where they saw not only the ride-sharing industry up close, but also the supply shortages in such rapidly growing companies and a lack of focus on the drivers and cleaners.

“We had worked at Homejoy and worked at Uber and all these companies had a focus on the consumer,” Pang shared.

In contrast, Breeze’s focus is on the drivers of the ride-sharing economy. It even does its best to admit only drivers it deems in real financial need of its service and a ride-sharing job. Pang shared that its drivers are usually people who haven’t been able to find other jobs or are underemployed and in desperate need of additional income.

One of the most interested things about Breeze is the source of the cars.

At the beginning, the founders financed as many cars as it could from local dealers until they maxed out their personal credit. Then they paid friends to borrow their cars and even sourced a couple from Craigslist.

Note that the company has no funding yet and has been bootstrapping this entire operation.

However, it has recently struck a deal with an undisclosed provider (Pang declined to share even whether this was a dealer or manufacturer) that has agreed to provide them with large quantities of new hybrid cars, as well as the rest of its fleet, with no money down. Breeze will be effectively leasing the cars and replacing them after a year.

This incredibly easy access to many cars is largely why Pang and his team believe they will be able to scale their model very quickly.

And if you’re wondering whether the ride-sharing companies have a problem with Breeze’s little operation, it turns out they’re quite happy about it.

“All of them are very excited about what we’re doing,” said Pang. Breeze is actually helping solve the driver supply problems they’ve all been struggling with, and they are fully supportive.

That’s not a huge surprise, as ride-sharing companies have been using a variety of tactics to attract more drivers to help keep up with demand. Uber even launching a program to finance potential drivers’ new cars.

Pang noted that although there are no formal partnerships with any ride-sharing company for now, discussion have already begun.

And along with its 20-city goal for the rest of the year, Bay Area-based Breeze plans on landing in Los Angeles and other West Coast cities next, as well as raising its first funding very soon.