When it launched last year after a successful Kickstarter campaign, Ouya seemed poised to change the balance of power in the console wars. Uniquely situated between consoles and mobile devices, Ouya’s has since struggled to find its voice. Now Ouya is focused on publishing exclusive games that range from hilarious multiplayer combat to poignant, issue-based dramas. At GDC, I had a chance to go hands-on with six of them, arranged below from silly to serious.

For more details about Ouya’s plans for the future, be sure to read VentureBeat’s interview with Ouya CEO Julie Uhrman. 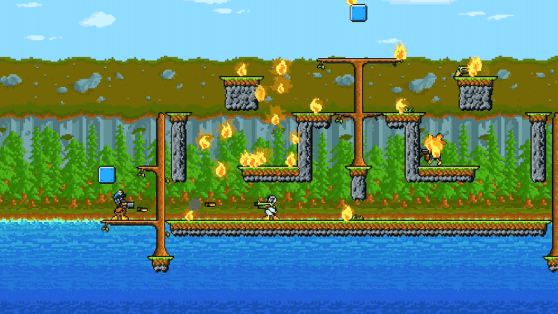 Above: Duck Game is fast-paced, competitive, and incredibly bizarre, making it Ouya’s most lighthearted upcoming game.

Easily the wackiest of Ouya’s upcoming games, Duck Game is a madcap, addictive shooter that’s hard to put down. It’s the creation of one developer, Landon Podbielski, but it feels extremely polished and well-balanced.

In Duck Game, up to four players on one machine compete in a series of rapid-fire deathmatches, where just one death takes you out for the round. These arenas have randomized weapons, and they include useless junk like trombones, defensive gear like helmets, melee items like swords, and spectacular firearms like muskets, machine guns, flamethrowers, nets, and a lot more. The wide variety of weapons makes the action incredibly goofy.

Like in Super Smash Brothers, the retro-styled arena zooms in as you approach your opponents. Battles have a Loony Tunes type of cartoon violence, with comic explosions, surprise ambushes, and tragic self-immolation all occurring in about a 15-second timeframe.

Since it’s a local multiplayer game, a good portion of the fun is in laughing and mocking your opponents in person, if only for a short time. It’s too bad that the game won’t be available online, though — Podbielski told us that Duck Game wouldn’t work with even the slightest bit of lag. If you’ve got an Ouya, four controllers, and three friends, Duck Game will be a hilarious way to spend an evening when it launches this Spring. 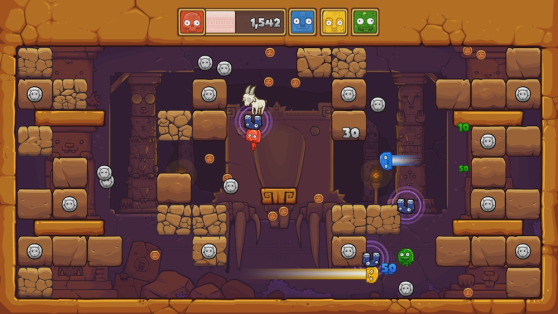 Above: In Toto Temple Deluxe, other players try to literally get your goat.

Another fast-paced local multiplayer game, Toto Temple Deluxe is the latest from Juicy Beast, who previously developed Knightmare Tower. In Toto Temple Deluxe, you have to charge brightly colored stone figures around the screen, picking up a goat and holding on to it as long as possible.

Holding the goat gives your character a big head and slows you down, which gives other players a chance to catch up and steal your bleating prize. To defend against a dashing attack, you can temporarily enable a shield effect. You can also earn points by picking up coins scattered around the arena, and the first player to reach 4,000 points wins.

Like Duck Game, Toto Temple Deluxe is a lot of fun, but it doesn’t last very long. Its short sessions are built for balanced replayability, with stages that feature breakable blocks or stone traps for a bit of variety. It’ll be available in April. 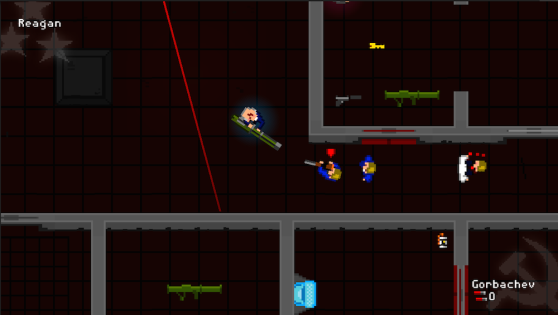 Above: Reagan Gorbachev imagines the 1980s leaders of the USA and USSR as action heroes.

Another silly Ouya game, Reagan Gorbachev is a single-player or two-player co-op game played from a top-down perspective. It stars the two biggest powerbrokers of the 1980s: former U.S. president Ronald Reagan, depicted here as a samurai sword-wielding lockpicker; and former Soviet Union president Mikhail Gorbachev, who uses a blowgun and can hack computer terminals.

These two politicians end up locked in a cell together, held captive by a mysterious band of militants. They have to combine their talents to open doors and fight the guards, then make their way to the exit.

The pixelated graphics are a bit rough, but it is amusing to pick out Gorbachev by his famous forehead birthmark. Developer Team2Bit cited both Hotline Miami and Gauntlet as influences, but the demo I played wasn’t very complete. The novelty of turning two historical figures into kick-ass warriors, Abraham Lincoln: Vampire Hunter-style, is a definite plus, even if the gameplay is still taking form. 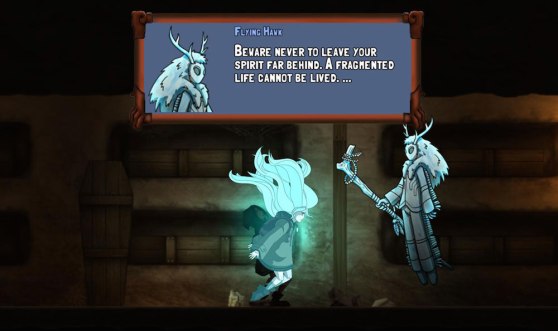 Above: The hero of Whispering Willows is a teenage girl who can communicate with spirits.

Ouya’s upcoming exclusives aren’t all wacky — some of them are far more dramatic. Whispering Willows is a 2D adventure game starring a 13-year-old girl who explores her father’s mansion and finds that she is able to communicate with spirits through her locket. With the locket, she can use astral projection, sending out a ghost version of herself to activate switches and unlock doors.

The artwork in Whispering Willows is gorgeous and refined, with a patient, moody atmosphere that immediately makes you feel vulnerable and unsettled. While Ouya’s sillier exclusives are a hoot to play with friends, Whispering Willows is made for turning down the lights and losing yourself in the story.

Whispering Willows has been greenlit on Steam and will appear first on Ouya this summer. 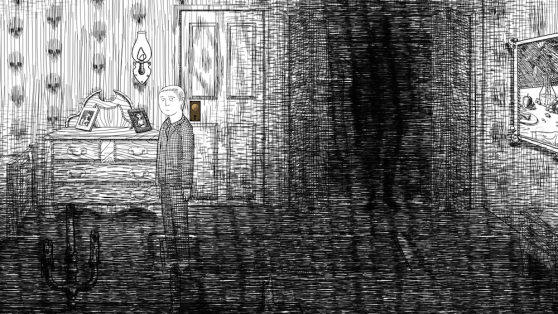 Above: Neverending Nightmares has the visual style of Edward Gorey, a master of artistic horror.

Another game with dark, eerie visuals, Neverending Nightmares looks like it was drawn by the great horror author and artist Edward Gorey. If you’ve ever wondered what Gorey’s work would look like as a video game, Neverending Nightmares’ stark black-and-white shading, vacant stares, and flashes of dreadful horror will put that question to rest.

Neverending Nightmares is an adventure game inspired in part by developer Matt Gilgenbach’s personal struggles with mental illness, specifically obsessive-compulsive disorder and depression. You play as an asthmatic 27 year old who wakes up to find his house deserted and filled with bloodthirsty monsters. You’ll walk slowly through the halls, hiding in closets from monsters while trying to find a way out.

Splashes of blood sometimes punctuate the black-and-white visuals, making this game more gory than Gorey. It’s appropriate that Neverending Nightmares will be released around Halloween, though a three-level Alpha build is available now for early Kickstarter supporters. 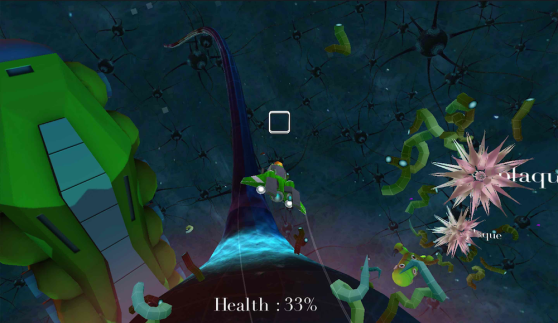 Above: Cascade takes you inside the mind of a patient suffering from Alzheimer’s disease.

The most dramatic game of Ouya’s GDC lineup isn’t about monsters or haunted mansions, but rather, the real-life tragedy of Alzheimer’s disease. At first glance it looks like a space shooter, but the game is actually set inside a simulation of the neural pathways that Alzheimer’s has damaged, causing loss of memory and brain function.

Your goal is to fly between the brain’s neurons, blasting at the damage and eliminating waste products that are excreted by the disease. You can even work together with up to four players in split-screen mode, but just like in real life, it’s impossible to completely prevent the disease from spreading.

Developers Fayju (makers of the much more lighthearted Amazing Frog) were inspired to create the game in collaboration with a medical researcher after a family member was affected by Alzheimer’s. Like another Ouya game, That Dragon, Cancer, this is a game that deals with death and disease in a thoughtful way and represents more than just lighthearted entertainment. Cascade is due to be released on or around June 14, 2014, the 150th anniversary of the birth of disease discoverer Alois Alzheimer.