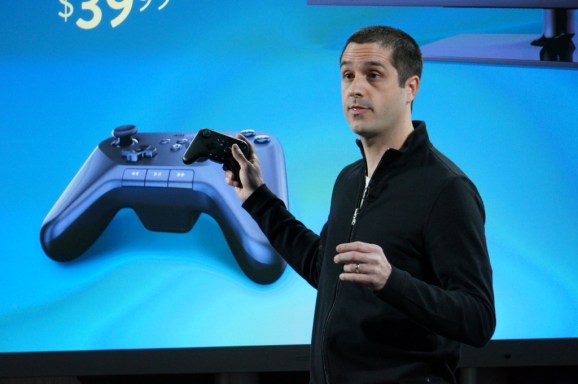 Amazon wants to rule your living room, and video games are one way it plans to do that.

The online-retail giant announced its set-top box at an event this morning. It is the Fire TV, and — like the Kindle Fire tablets — this device runs on top of Google’s mobile operating system, which means it is capable of playing Android games. It is shipping today for only $99. Amazon already showed off titles like developer Mojang’s brick-building phenomenon Minecraft. It is also working with publishers like Sega, Electronic Arts, and Disney, and Amazon expects to have thousands of games available by May — including a sci-fi shooter from its new game studio. While the device comes with a TV-style remote, it will also have a gaming controller that sells separately for $40.

The Fire TV features a quad-core processor, a dedicated graphics chip, and 2GB RAM. That’s on par with many of today’s top tablets and smartphones, but that is still less powerful than last generation’s Xbox 360 or PlayStation 3 home gaming consoles, let alone the new Xbox One or PlayStation 4. It is also significantly weaker than most gaming PCs, including the upcoming Linux OS-based Steam Machines from game developer and digital distribution giant Valve.

And once you consider microconsoles such as the Ouya Android system, the Fire TV faces one crowded living room.

The corporation also showed off one of the first Fire TV exclusive games from Amazon Game Studios. It is a third-person shooter called Sev Zero that has players shooting enemies in a science-fiction setting. It will play like a horde mode and will have players setting defensive towers while also shooting waves of enemies. This is similar to the recent Plants vs. Zombies: Garden Warfare title from Electronic Arts.

Amazon has crept into the content business. It has long offered Instant Video television and movie streaming as part of its subscription service, Amazon Prime. It has released Amazon Instant Video apps on its Kindle Fire tablets as well as on devices from competitors, like the Xbox One. Over the last year, it has started producing its own original shows (like the political comedy Alpha House) similar to Netflix and its popular House of Cards.

That strategy is carrying over into games. In February, Amazon acquired developer Double Helix Games, which most recently produced the head-to-head fighting game Killer Instinct for Microsoft. The studio will produce original titles for the Fire TV.

Amazon’s device most closely resembles the Android-based Ouya microconsole that launched last year. That hardware features a custom operating system also based on Google’s OS that optimized Android titles for the television. The Ouya is struggling on the market for a variety of reasons, but it is primarily a bust with developers, who have had trouble generating revenue from the system.

Amazon might have an advantage that Ouya did not. It already has a well-stocked Amazon App Store, and gamers could immediately bring some of that content (the games that work on TV) to their new set-top box. The retailer is also looking at producing some of its own first-party titles, which is something that Ouya has not explored.