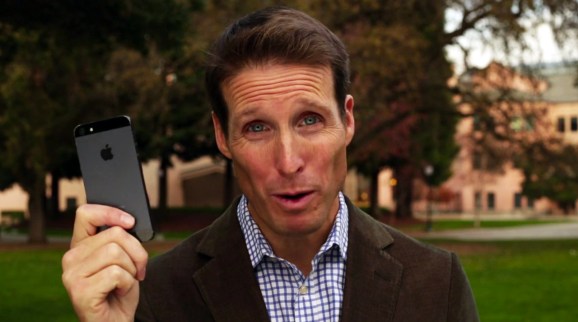 Clari’s goal is to know salespeople better than they know themselves.

Founded in 2012, the sales productivity startup will emerge from stealth mode on Thursday, bringing its ambitious iOS and Android app to a horde of productivity-hungry sales reps. It applies some nifty data analysis to a bunch of information sources — email, social, calendar, customer relationship management (CRM) systems — to turn smartphones into “sales weapons.”

“We know the context of the rep, their relationships, and their meetings,” Clari CEO Andy Byrne told VentureBeat. “Our algorithms will proactively surface the relevant news, insights, documents, etcetera, based on their day.”

If you have a deal in progress but haven’t communicated with your client for a week, Clari will remind you. It’ll also automate a lot of time-consuming data entry for dozens of apps, updating managers on deal progress and competitors.

Byrne has a strong sales background. Before founding Clari, he spent seven years as the vice president of business development at e-discovery firm Clearwell, which Symantec scooped up in 2011 for $390 million. During his time there, he watched his sales reps spend huge portions of their day performing simple data entry into CRM systems. Yet despite that time investment, he had a tough time assessing how deals in the field were progressing. Alongside big macro changes in mobile, cloud, and data technologies, those issues provided the impetus for Byrne to start his new venture.

Clari has exclusive backing from Sequoia Capital, with whom Byrne has an extremely close relationship. Sequoia partner Jim Goetz funded several of Byrne’s past ventures, and he’s convinced the firm to dump $6 million into Clari so far.

The Sequoia relationship is a huge boon for the startup, said Byrne. The startup announced $6 million in “new” financing from Sequoia today, though it actually received those funds in late 2012. It’s used the money to build up its 30-person team, which Byrne characterizes as a close-knit crew of engineers.

“If someone asks me why Sequoia, it comes down to one word: trust. … Typically you’d look to have another investor so you could have another brain at the table. But for us, with Sequoia, you don’t get access just to one partner, you get access to all of them. They roll up their sleeves and they help us puzzle through the hard questions.”

The startups go-to market resembles Box’s consumerization of IT: Sales reps or managers download Clari for free, see the app’s value, and spread it to their colleagues. As it spreads virally throughout an enterprise, which Clari can see through its relationship graph, the startup monetizes by brokering enterprise deals to outfit an entire sales team with Clari.

Clari competes with apps like Tact, which acts as a mobile hub for salespeople to manage their relationships with leads and customers. But where Tact focuses more on individuals, said Byrne, Clari is more about an entire enterprise’s workflow — appealing to management and sales operations teams as well as folks in the field.

“One of the really fun surprises for us has been the amount of executives using this solution,” he said.

Clari shares some commonalities with CRM tools, business intelligence tools, and even consulting firms. But it’s not quite any one of those.

“What we’re doing for sales productivity is a really new approach that marries beautiful design with data science.”