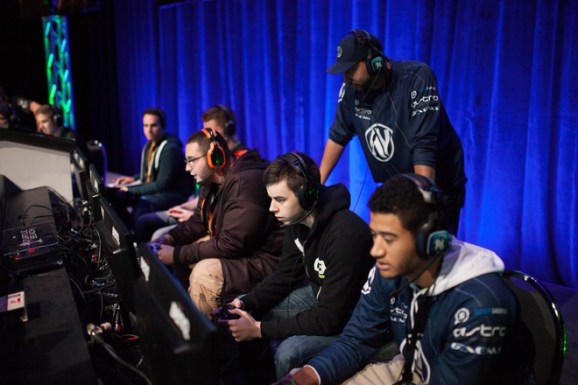 eSports competitors in the zone at an MLG tournament.

Just how big are e-sports now? Over the last four years, worldwide viewership of online competitive gaming has increased eightfold.

This is one of many stats in a joint report from SuperData Research and Newzoo that show the powerful momentum behind the growth of e-sports. In 2013, global viewership doubled year-over-year to more than 70 million. Nearly half of that number came from the U.S., where free-to-play games have enjoyed rapid growth since the start of the decade. For example, League of Legends is a free-to-play online strategy game and has become a huge e-sports phenomenon, with over 32 million viewers tuned in to its Season 3 World Championship last October.

“Large companies like Riot Games, Valve, Wargaming and Ubisoft are placing bets on the growing success of e-sports worldwide,” SuperData chief executive Joost van Dreunen said. “And with the booming popularity of streaming services like Twitch, ESL and MLG, it is becoming easier than ever for gamers to connect with other players and form communities that culminate in competitive gaming,” he said.

Other facts to come out of the research, which was conducted from March 1 to March 20, include the demographics of the e-sports audience: nearly half are men aged 21-35 (in the U.S. and Europe). The data collected also suggests that such fans are more likely to be married and have a full-time job than ordinary gamers. And those who watch e-sports in the U.S. tend to watch a lot of them — on average, they tuned in 19 times a month for over two hours at a time, according to the report.

There is much more information and Newzoo’s full report in this brief on its website. Also, here is a link to SuperData’s brief and report.