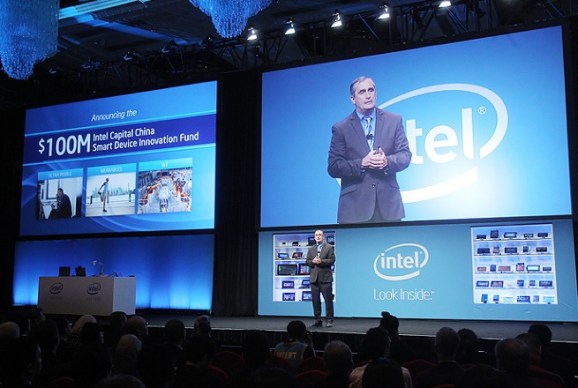 The company also announced its Intel Smart Device Innovation Center in Shenzhen, China. That’s a place where companies will be able to collaborate on designs for devices such as 2-in-1 computers that double as tablets, as well as other types of mobile devices.

At Intel’s spring Intel Developer Forum event, Krzanich made the first public live call using China Mobile’s TD-LTE network and Intel’s new wireless chip, the Intel XMM 7260 LTE. Intel has been in China for nearly three decades, but it is doubling down in China at a time when its importance on the global stage is growing. The Shenzhen center could create both local and global computing products.

“The China technology ecosystem will be instrumental in the transformation of computing,” said Krzanich, in his speech. “To help drive global innovation, Intel will stay focused on delivering leadership products and technologies that not only allow our partners to rapidly innovate, but also deliver on the promise that ‘if it computes, it does it best with Intel’ – from the edge device to the cloud, and everything in between.”

Intel said it wants to expand its work beyond tablets. Since 1998, Intel Capital has invested more than $670 million in 110 companies in China across two already-established investment funds. Krzanich said Intel is on track to ship 40 million tablets with Intel chips this year.