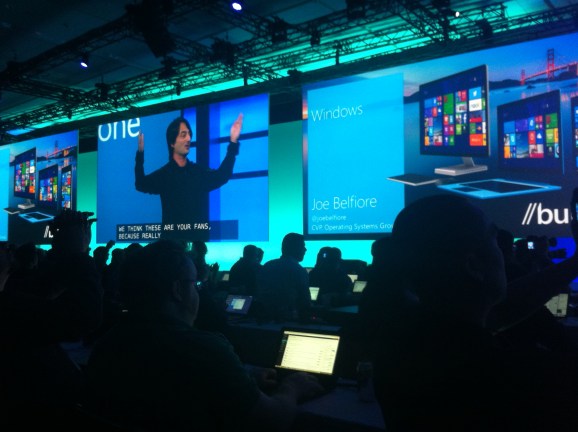 New Windows Phone hardware makers like Micromax and Prestigio are on board, and Microsoft is working with Qualcomm on making reference designs around Windows Phone 8.1, Windows corporate vice president Joe Belfiore said at the Build developer conference here today.

Belfiore held up working models from Micromax and Prestigio. (We hadn’t heard of these companies until today, either.)

Microsoft is launching Cortana as a beta to improve the experience, Belfiore said. It’s already integrated with apps like Hulu, Facebook, and Microsoft’s Skype.

Cortana, of course, is displayed prominently on the new home screen.

Belfiore demonstrated a new “action center” — a sort of quick reference across multiple applications on the phone — as well as new lock-screen experiences, updates to the app store, the calendar, and other features.

A new Wi-Fi Sense section of settings lets people automatically connect to certain networks and share network access between laptops and Windows Phones. And now you can securely sign in to a Wi-Fi network without asking an admin for the password.

“Windows Phone 8.1 is going to start rolling out to consumers as an update in the next few months,” he said. It will be pre-installed on Windows Phones in late April or early May.

And the Windows 8.1 update, for desktops and keyboards, will be available for free on April 8, Belfiore said.