The game industry is consolidating faster than ever before as major companies in Asia and North America continue to make deals to absorb more value.

In the first quarter of 2014, the game industry has already had more than $5 billion in mergers and acquisitions, according to a new report from investment bank Digi-Capital. That nearly matches 2013’s full-year total of $5.6 billion. These moves are coming from American companies (like Facebook and Zynga) and Asian investors (such as Tencent and Softbank). Mobile developers continue to attract the most interest, but tech startups and developers of PC massively multiplayer online games were also major targets. Gamers spent $16 billion on mobile gaming alone in 2013. That number is likely going to grow throughout this year, and acquisitions offer major companies a quick way to capture that spending.

“Dominated by blockbuster transactions in both Asia and America, the games M&A market has scaled to new heights for this stage of the cycle,” Digi-Capital managing director Tim Merel said in a statement. “Q1 2014 has been unprecedented, and it will be fascinating to see how this will change the course of the games market in the coming quarter.”

This continues a trend from 2013, which was a record year for mergers and acquisitions (a record that is likely going to get demolished this year). Nine of the 10 biggest deals last year all had Asian buyers, and Tencent and Softbank continue to top Digi-Capital’s pyramid of potential game “consolidators.” Other companies at the top of this list — which are the corporations most capable of acquiring others — includes Apple, Nintendo, Microsoft, and Activision. 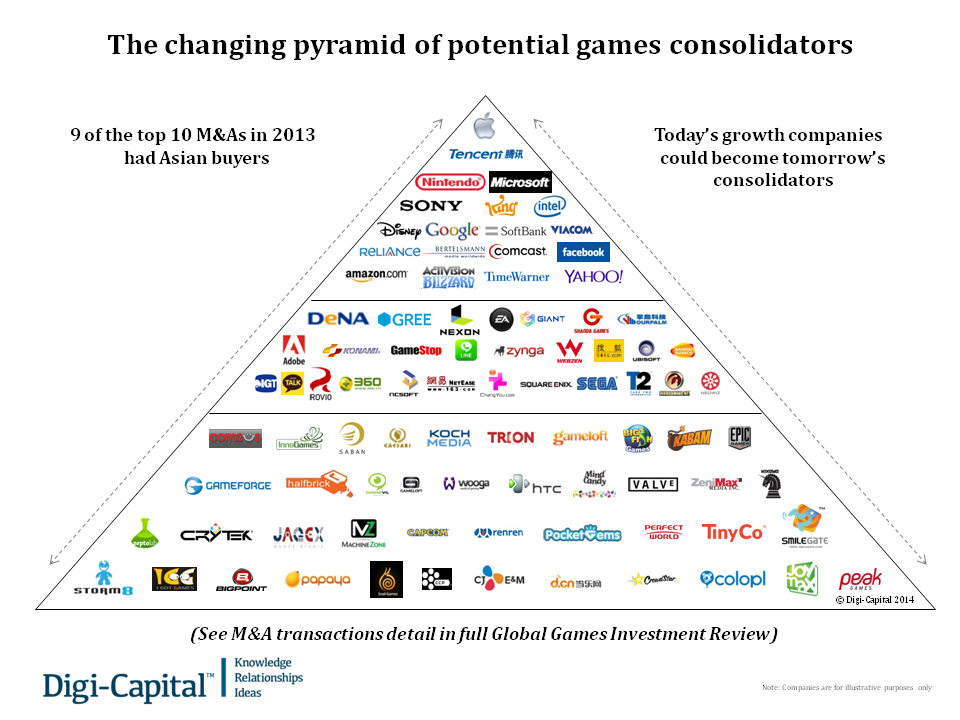 Above: Digi-Capital’s chart illustrating the companies most capable of making big acquisitions.

The growth in acquisitions signifies that sectors like mobile have a lot of money at stake and also that larger companies aren’t equipped to capitalize on the opportunities. The rest of the year will likely see more mergers and acquisitions as companies with lots of money target startups that offer a way to corner valuable and growing markets.