Ludei takes a swing at Adobe today, announcing that HTML5 games and apps built with its CocoonJS tools can run 10 times faster than similar apps made with the older company’s traditional Phonegap development tools.

Normally, most HTML5 developers use Adobe’s Phonegap tool to develop their games and other apps. By extending Ludei’s CocoonJS platform beyond gaming to other kinds of programs, the app- and game-development company can accomplish the same thing and enable developers to create HTML5 apps that run 10 times faster than the Phonegap-based HTML5 apps, according to Ludei.

Making that happen is a big deal, since HTML5 is the lingua franca of the Web. If you write code in HTML5, it can run in any browser. That means you can create a game that will run on any device. To users, the games and apps just run.

In the past, the tradeoff has been that HTML5 apps run slower than native apps. For games, that’s a huge problem, and it has kept HTML5 from becoming more universal. In fact, Flurry’s market research found that in 2013, 86 percent of time spent on mobile devices is with native apps, compared to only 14 percent with HTML5 apps. That is compared to from 80 percent native apps and 20 percent HTML5 in 2012.

Eneko Knorr, the chief executive of Ludei, said in an interview with GamesBeat that he wants to see those percentages change dramatically in favor of HTML5. That’s why Ludei is extending its platform beyond games and is taking on Adobe’s Phonegap more directly. He said that Ludei has fixed the problems associated with slow performance of HTML5.

“We realized it would be a no-brainer for us to open our platform so it can be used to create every kind of app, not just games,” Knorr said. “We have already solved the tough problem of getting games to run properly with HTML5. Getting apps to run is much easier.”

Ludei has just 20 employees in San Francisco and Spain. But it has more than 20,000 developers building games in HTML5 with its platform. Those companies include Disney, Nickelodeon, and Electronic Arts. About 4,000 new developers are signing up each month. Available Ludei-based games include Candy Breaker, Poise, Jelly Slice, and Ready to Roll.

“The interest around HTML5 is huge now,” Knorr said.

Knorr said they’re doing that because it takes HTML5 apps and makes them run at blazing fasts speeds using its own CocoonJS technology.

“To us, the debate of HTML5 versus native apps is over,” Knorr said. “The answer is using HTML5 for cross-platform app development.”

The WebGL standard is another way that apps with improved graphics can run across platforms. But Apple still doesn’t support WebGL content on iOS. Ludei’s technology can help address that and make WebGL code run on Apple devices. 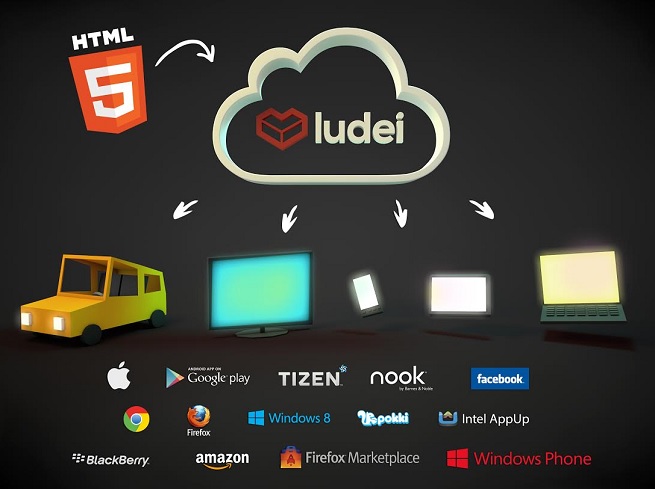