When I first heard about The Elder Scrolls Online, the most important question I had as a devout fan of The Elder Scrolls series was whether or not a massively multiplayer online game could possibly live up to the standards of what I consider some of the best single-player role-playing games ever made. For all of their bugs and rough spots, Bethesda’s franchise has consistently drawn me into their worlds more than any other RPGs.

Story and franchise faithfulness mean nothing in an MMO unless they are built upon a solid core design. We saw what happens when that isn’t the case with the disappointing Star Wars: The Old Republic. And while I appreciated The Secret World’s unique class customization system, it felt silly to deal with genre conventions such as respawning enemies (aka mobs) and running around doing the same thing as everyone else. So I’m glad to say that The Elder Scrolls Online makes enough changes to what I’d consider a typical MMO to make it different enough for a pure genre fan, versus a franchise fan, to give it a whirl. The Elder Scrolls Online adds something to MMOs.

So, does the first MMO set in Tamriel meet the standards of The Elder Scrolls IV: Oblivion or The Elder Scrolls V: Skyrim? In my 20 hours with the PC version of ESO (it’s also coming out for the PlayStation 4 and Xbox One in June) and a thorough exploration of the first three zones for Ebonheart Pact faction characters, I found an MMO borne from the spirit of the single-player games — one that’s not only mechanically interesting but also faithful to the source material. 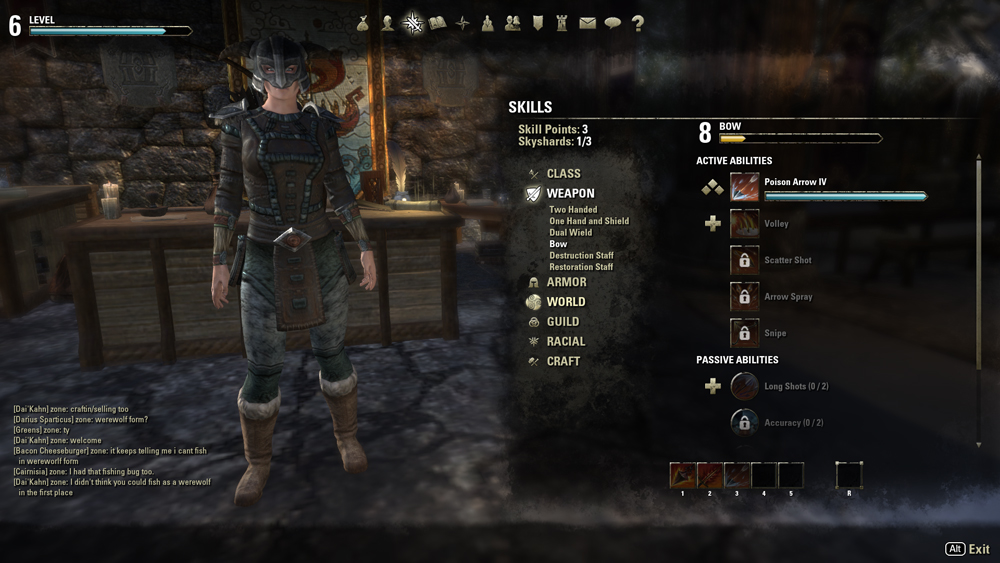 Above: The skills screen. Note the symbol to the left of “Poison Arrow IV.” This indicates that the skill may be morphed into a new version with additional effects.

The four classes in The Elder Scrolls Online may map roughly onto typical MMO classes – Dragonknights are warrior-tanks, Sorcerers are spellcasters, Nightblades are rogues, and Templars are healers – but the customization is so deep that the system doesn’t limit these to the preferred roles in parties that those archetypes usually fill.

You earn skill points when you level up, and you can apply those points to class abilities, weapon class attacks like new bow or sword skills, racial skills like my Nord’s two-handed weapon specialty, or crafting skills. Furthermore, every class can use every type of weapon and armor throughout the game, which means you have access to all of their associated skill trees from the very beginning.

I still see people shouting “One more DPS!” or “Need two healers!” in chat when they’re trying to assemble parties for encounters, but I wouldn’t assume that all Sorcerers do tremendous amounts of damage but can’t take punishment, or that all Templars need to sit in the back ranks of a fight and be protected while they heal everyone. That Sorcerer you just recruited might actually be a battlemage, and that Templar might be a damage-dealing paladin. 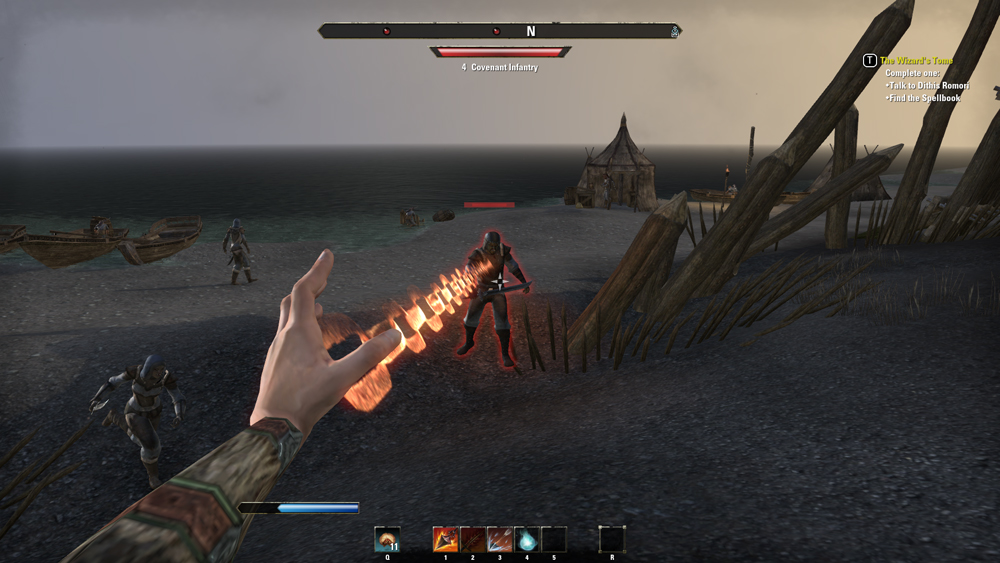 Combat breaks out of its MMO chains

The Elder Scrolls Online feels perfectly normal to play from a first-person perspective, and that goes a long way toward making it feel like The Elder Scrolls single-player RPGs. It also makes the combat feel more personal, versus the detached, stats- and repetition-based combat tactics that dominate most MMOs I’ve played.

The left mouse button still swings your sword and looses your arrows, and the longer you hold the button, the more powerful the attack. The right mouse button throws a block. Sword and shield fighting in particular just feels right, like it ought to in any Elder Scrolls game.

Where physical attacks feel like they’re more about where you’re specifically aiming your blows, ranged attacks are still mostly about auto-aim. Actively changing targets on the move was much easier for me in The Elder Scrolls Online than in other MMOs, because selecting targets with the cursor versus tabbing through targeting choices was my preferred method, and that played into making ranged combat more interactive.

For instance, if I’m facing two enemies, I probably want to hit each of them with a poison arrow, which does damage over time, before I close with either of those enemies. Enemies are silhouetted with a red glow when you target them, so I loose one poison arrow, manually aim at the second target with my reticule while I’m backing up, make sure the second enemy has the red glow, and then fire the second poison arrow. Switching ranged targets on the move is all about kinesthetics.

I can mostly stand still and use the abilities on my five hotbar buttons to defeat an enemy, but dodging enemy special attacks by double-tapping one of the movement keys is important. The area of effect of an enemy’s special attack is outlined in red as they’re prepared to use the attack, so I know precisely how to get out of the way. If you’re up close with an enemy, you can also interrupt their special move and knock them off balance for a moment.

It all adds up to a very active and satisfying combat system that breaks from what I expect from an MMO. 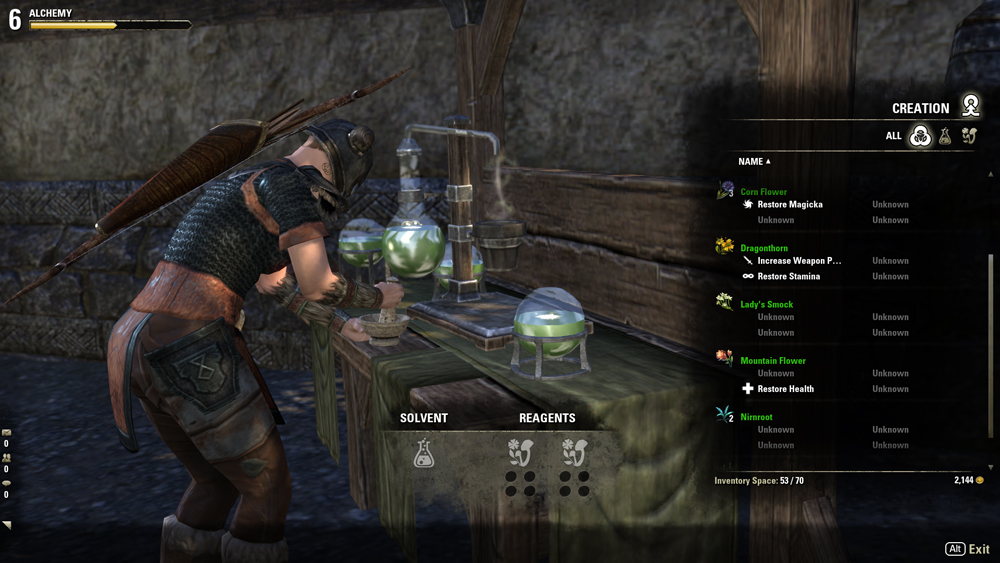 Above: Alchemy takes a lot of patience.

Crafting is easy and actually worth your time

The crafting systems in The Elder Scrolls Online are superlative. I always craft in MMOs when the systems are not overly complex, but usually I find that whatever I’m making is worthless compared to the weapons and armor I get at the end of quests. In The Elder Scrolls Online, I made my entire first suit of heavy armor from scratch, and some of the pieces maintained their value much longer than armor of a comparable level I’ve made in other games.

I fastidiously make sure I have the right kind of food crafted, and I use it all the time. Food crafting is usually a throwaway thing for me in MMOs. I’m taking the time to learn enchantments because they’ve also been immediately useful, versus being a crafting skill that only really matters toward the end when I’m crafting high-level items to sell to max-level characters for a ton of gold.

The only form of crafting that’s been useless to me so far is alchemy. Just like in single-player Elder Scrolls games, I have no idea what effects a particular plant has until I’d experiment with them. Some plants are the basis of potions that restore health, and other plants make poisons. Plants can restore or damage your Magicka, which powers spells. Figuring out the alchemical properties of all of the different plants I’ve found is slow-going, much more so than I’d like.

I keep at alchemy, however, because I am so entranced by the crafting systems in The Elder Scrolls Online that all I did for my first hour or two was collect resources for all of the different crafting systems — and level them all up as fast as I could.