I was alone in a room wearing virtual reality goggles. But it felt like I was in a park, surrounded by four Shaolin monks who were threatening me on all sides with martial arts moves. This kind of surround-video experience is what you’ll get from Jaunt, a new entertainment startup coming out of stealth today.

On top of announcing a funding round, Jaunt is unveiling for the first time its new way to experience 360-degree videos in virtual reality. The company calls these new kinds of videos “cinematic VR,” where you can wear virtual reality goggles and see everything around you in 360 degrees. If you turn your head in a complete circle, you’ll never see the edge of the video screen.

The timing of the announcement is good, considering that Facebook just paid $2 billion for virtual reality goggles maker Oculus VR, which is paving a new era of immersive virtual reality. Jaunt’s videos, which are filmed with 16-camera contraptions, make use of the Oculus Rift goggles. Jaunt will likely also work with other kinds of virtual reality systems, like Sony’s Project Morpheus virtual reality headset.

“This is all happening a lot faster than we thought it would,” said Jens Christensen, the chief executive of Jaunt, in an interview with GamesBeat. “We want to broaden the meaning of virtual reality beyond games. We want you to feel that effect of being transported to another place.”

Palo Alto, Calif.-based Jaunt has raised $6.8 million from Redpoint Ventures, SV Angel, British Sky Broadcasting, and angels Peter Gotcher and Blake Krikorian. The funding shows that there are more things that you can do with virtual reality than play games or take tours of animated virtual worlds.

A lot of us older folks might have memories of the 360-degree Circle-Vision attractions at Disneyland and Epcot Center at Disney World. With those, Disney used a bunch of cameras to film scenes in 360 degrees. Then it built circular theaters where it aired the videos. You could stand in the middle of the theater and look at the action unfold in any direction. I saw the “Wonders of China” film at Disneyland many years ago, and I still remember it to this day. 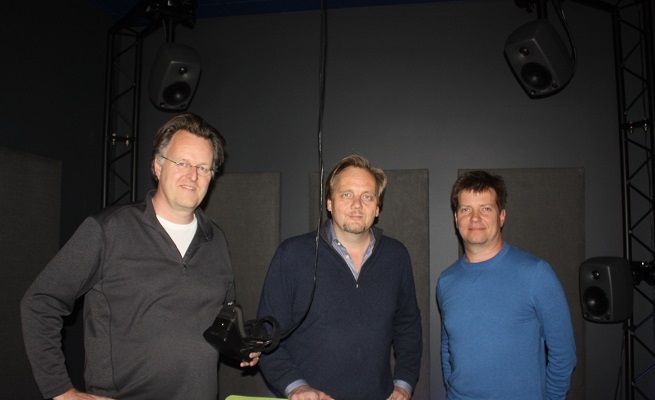 Other companies are dreaming similar things. Panono is creating a 36-camera ball that you can toss into the air and take 360-degree still pictures of a scene around you. Jaunt is using off-the-shelf cameras now, but it is contemplating designing its own.

Jaunt films the cinematic VR scenes with its cameras positioned in the center of the action. It also has a 3D positional microphone that picks up the direction that sounds come from. Then it stitches the edges of the videos together so the viewer can see it in a seamless fashion. That’s hard to do. I saw a mismatch of seams on the Golden Gate Bridge as one part of the bridge was higher than the other. Still, more refined versions of the technology should get rid of that.

One demo showed a horror scene onboard a ship. I had full mobility inside the company’s VR cave. I could spin around in the chair, hampered only by the wire that was strapped to the headset. In a final version, that headset will ideally not be wired.

When I put on the headset, I was positioned in the midst of a hallway intersection. Positional sounds gave me the cue to turn my head. A man yelled at me, and I turned around. He was trying to fend off a giant tentacle with a fire extinguisher. It didn’t work, and he got dragged away. A woman tried to slam a door against another tentacle in another hallway. And behind me, a similar struggle played out as another crew member was stabbed in the chest by a sharp tentacle. It was a pretty awful production as far as movies go. But it made the point. I kept getting caught in the cord as I turned, but I had to move around often to make sure I saw the action.

Other experiences were also mesmerizing, including one where a BMX rider was doing stunts in a skateboard park. I had to keep turning my head to keep him in view, but I always knew where he was based on the sound of his wheels. Another scene was calmer, where guitar player Dave Mustaine was playing in a backyard patio by a pool.

Then Jaunt asked me to take off the earphones. In the next scene, I was surrounded by girls in a choir, each of them singing at different times. The sound of their voices came from different directions. I spun around to see which of the girls was singing. When they all started singing, the sound was bouncing around everywhere.

As part of the funding round, Jaunt’s new board members include Tim Haley, a partner at Redpoint Ventures; Peter Gotcher, a chairman of Dolby and DigiDesign founder; and Stuart Murphy, the director of entertainment at Sky. Haley said that Jaunt’s team of eight people is creating experiences that will make your jaw drop when you see it.

Jaunt has to create tools like the cameras that will train filmmakers how to create “wrap-around sight and sound videos.” The idea is to create a real sense of presence, or being in a faraway place without leaving your room. The company wants to produce an end-to-end solution of hardware, software, applications, and other tools for videographers and directors, said Arthur van Hoff, the chief technology officer of Jaunt, in an interview.

“Our aim is to produce content that will blow your mind and to put this in the hands of visionary directors,” van Hoff, former CTO at Flipboard, said. “My mom would never put on an Oculus to play a video game. But she would do it to watch the Royal Wedding in VR.”

Jaunt’s team of advisers includes Babak Parviz, the creator of Google Glass; Brad Wechsler, a chairman of IMAX; award-winning director Mark Romanek; and Bernd Girod, a professor of electrical engineering at Stanford University. Jaunt has applied for patents on the algorithms it uses to stitch videos together.

The company got started a couple of years ago when co-founder Tom Annau went on a vacation at the beautiful Bryce Canyon in Utah. He started thinking about the right way to capture the incredible scenery in panoramic visuals.

“I wish I could have something inside my memory,” said Annau, the former vice president of engineering at web-search startup Blekko and a former engineering manager at Google.

Then he teamed up with Christensen, who was an entrepreneur-in-residence at Redpoint Ventures and before that, CEO of A.I. startup Ellerdale.

The team came together. And when they heard about the Oculus Rift, they scrambled to get a prototype. The units were scarce, and one was selling for $2,000 on eBay. But luckily, one user sold the team a prototype for $300. They figured it could become a new art form.

Each new version of the Oculus headset had made the experience better. With time, the tech will get better.

“We think it will improve exponentially,” Christensen said. “It’s an interesting time, and the tech is just about there.” 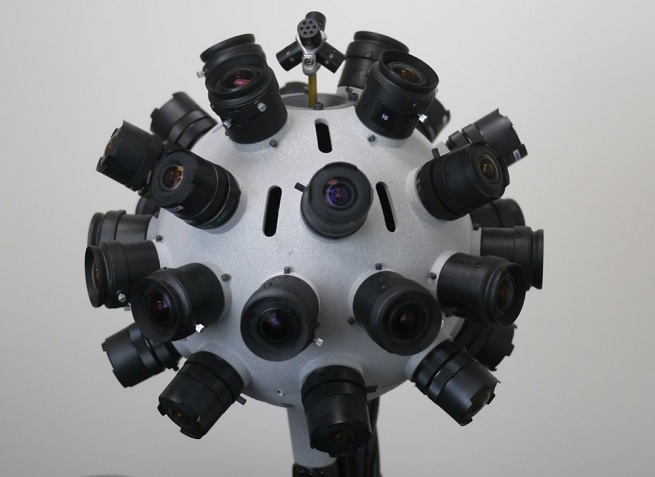 Above: Jaunt will film with 16 or more cameras.