This morning started out like any other. I woke my daughter up, we exchanged hugs, I got her dressed, she told me about the wonderful dream she had where we went on a magical adventure together, we exchanged sickening-sweet I-love-you’s, I walked her to the bathroom … and then I put her in a head lock for the routine tooth brushing battle.

After a lot of wiggling around, my shirt and her face had a better chance of fighting tooth decay than her teeth. If I keep my hands off and let her perform the task herself, the toothpaste becomes more of a quick morning snack instead of winding up on her teeth. Getting my little clone motivated to fight gum disease and gingivitis on her own is as likely as getting a cat to enjoy taking baths.

The problem of getting kids at least half-assed interested in brushing their teeth is something veteran video game executive Ethan Schur and inventor Dr. Yong-Jing Wang are tackling. Their product, Grush: The Gaming Toothbrush for Kids, launches its Indie-gogo campaign today. Hold on — yes, you read that right. A gaming toothbrush.

The Grush functions as both a regular toothbrush and as a controller that tracks where the brush is physically located inside the mouth. The device interacts with an iOS or Android device (attached to the mirror via a special bracket) that plays a game that is specifically designed to interact with the Grush. 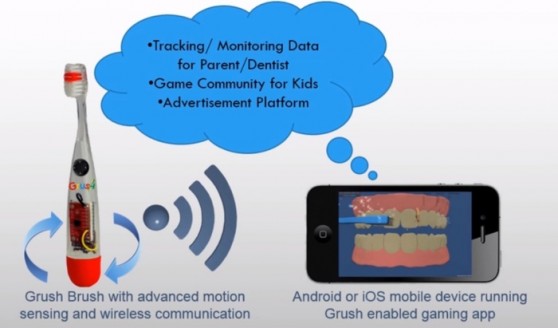 Above: How it works

Wang’s “a-ha” moment hit him while dealing with his own struggles teaching one of his two kids to brush their teeth. “I hadn’t paid attention to his brushing until our dentist discovered his first cavity. We spent almost $2,000 dollar in dental bills,” he said. “As a scientist, I think it is ironic that modern technology cannot provide a solution for this problem. The design of tooth brushes has not changed much for thousands of years. [The] 1498 Chinese toothbrush [for example].”

Smart brushes, however, are not necessarily a new idea. Oral-B offers a line of products that can connect to your mobile phone and track your progress. There is also the Kolibree that tracks movement, stores usage data, and adds a game-like award system via points.

But they’re not the Grush.

“What they don’t have is interactive visualization,” Schur says. “We are changing the dynamic between parents and kids from push to pull with kids actively wanting to brush their teeth. All other toothbrushes propagate the ‘brushing as a chore’ concept and are not much more than simple ‘egg timers’.”

Schur and Wang are also providing an API for mobile device developers who are interested in creating Grush content. Until this project gains traction, however, Threadbare Games is providing the first suite of Grush games at launch.

But how do you design a game that encourages kids to brush their teeth, let alone use correct technique?

“We have to be very creative to keep kids interested,” Schur said. “One great example is the game ‘Brush-a-pet’. In this game, the Grusher gets to raise a giraffe from a baby and perform different tasks, like petting Gavin the giraffe, cleaning mud off the giraffe and so on. … However, the same essential behavior is performed each time with all four quadrants of the mouth brushed, front and back, with the proper angle toward the gum line. Kids care for the overall health of their virtual pet as well as the very real health of their teeth and gums.”

Since we are talking about games, there must be some sort of multiplayer component to the Grush game library? If you have two kids struggling to get into the habit of brushing their teeth, maybe manipulating sibling rivalry is one way to encourage healthy hygiene? “Competition will work in two ways: in the home between siblings, and there will be a Grush competition for the top 10 Grushers with a prize, which is opt-in and anonymous,” Schur said.

Above: Gavin the giraffe.

Something that all smart brushes also offer is data collection on its user’s activities. Schur explains that the Grush does this as well. “For data, the Grush collects many data points during brushing like stroke intensity, speed, duration, brush angle toward the gum line, brush rotation, etc. What this boils down to is if a dentist notices a child has not been brushing as well in a certain quadrant or area of the mouth, the game can be re-targeted to focus on the problem area. Dentists would have access to an app and webpage to do this sort of monitoring.”

We are talking about a device that tracks children and that has the potential to make some parents uneasy. Some may be concerned about that data’s privacy. “It’s opt-in, so the parents would have to select this option with their dentists,” Schur said. “The most common use case is simply the parents monitoring their child’s brushing.”

“We are very strict about privacy and there are tons of rules about privacy especially when it comes to kids so we fully respect that. The only people seeing this personal data is parents and if they opt-in, dentists.”

If Schur and Wang reach their funding goal of $50,000, parents like myself may be able to relax. It could at least make the mundane act of brushing teeth, something that must seem as exciting as watching paint dry to a kid, a more tolerable habit.