Health care information company IMS Health has a lot of new cash in its war chest.

The health-focused tech firm, which provides analytics and services to drug makers, payers, and health care providers, raised $1.3 billion Friday morning in its New York IPO. It sold 65 million shares at $20, within its expected $18 to $21 price range. At its offer price, the company commands a $6.9 billion market cap.

The company also does consulting work and trend analysis of the drug business. That portion of the company is growing faster than its data business, driving the 4.1 percent increase in the company’s total revenue last year.

IMS put itself on the block in 2009. TPG, Canada Pension Plan Investment Board (CPPIB), and Leonard Green & Partners LP agreed to take the company private in 2010 for $5.2 billion, including debt.

The company posted $276 million in operating income for the nine-month period ended Sept. 30, 2013, up from $173 million a year earlier. Total revenue rose 4.1 percent to $1.87 billion. Ninety percent of the company’s revenue over the last three financial years came from subscriptions and license-based contracts, according to the company.

IMS intends to use the net proceeds from the IPO for debt refinancing and general corporate purposes, the company said.

IMS is listed on the New York Stock Exchange under the ticker “IMS.” At the time of publication, it’s trading at $22.66. 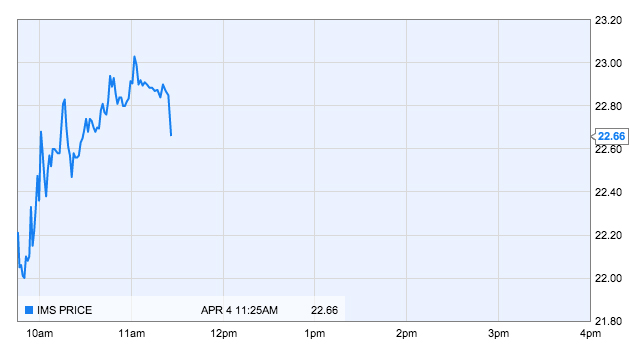 Above: IMS Heath’s stock price after it opened for trading on the NYSE.