Maxthon wants you to play console-quality online games on its browser — without requiring you to download anything.

The company, which makes the superfast Maxthon browser, hopes to become the favorite web browser of gamers by enabling them to play online games without the hassle of downloading gigabytes of data first. It is doing so by teaming up with C2Fun, the maker of the C2Ray game engine. Developers can easily adapt games made with the C2Ray engine to run in the Maxthon browser.

If it takes off, then Beijing-based Maxthon could differentiate itself from rival browsers like Chrome, Internet Explorer, Opera, and Firefox. With more than a billion downloads and more than 140 million monthly active users, Maxthon has already set itself apart as an alternative built for the cloud and reliability. With good memory management, it doesn’t crash as much as other browsers, regardless of how many pages you have open.

“We have embarked upon a game strategy that will change the way people play their games on the Internet,” said Karl Mattson, the general manager of Maxthon International, told GamesBeat in an exclusive interview. “Users can come and play interesting, complicated online games without having to download a giant file. You get a console experience through a web browser.”

Mattson said that the Maxthon cloud browser has carved out a niche among gamers because it enables them to sign into as many as five separate accounts simultaneously. That enables them to play different games at the same time. It is also more reliable since memory-management technology was built into the browser from the start. If you’ve ever had a browser crash on you during a game or a multiwindow session, you’ll come to appreciate memory management. This is basic plumbing for the Internet.

Gamers interested in testing this new technology can go to mxplay.net and try out Maxthon’s first title, Original Blood — a free-to-play 3D massively multiplayer online role-playing game where werewolves and vampires battle against humans. It’s the first of a number that will be available on the Maxthon web browser over time. Maxthon’s service will include country-specific game portals with a range of casual and hardcore games. Maxthon wants to take the feedback from Original Blood and use it to improve overall performance.

“In our own testing, it’s pretty slick,” Mattson said. “We want to see what gamers think. This is the first part of our gaming strategy that will roll out this year.”

Maxthon chose to team up with C2Fun because the C2Ray engine was made to run online games on web browsers without giant plug-ins or downloads. It offers a “native code” 3D experience. C2Ray was made for an always-on, seamless Web, making it easy to run online games on multiple platforms and operating systems. It fits well with Maxthon’s approach to making a high-performance web browser.

The deal with C2Fun makes sense, but it won’t be easy to lure developers to the game engine. Rivals such as Unity, Crytek, and Unreal have huge numbers of developers by comparison.

“We’re offering a true multiplatform, console-like experience for online gamers,” Mattson said. “We did an exhaustive comparison of Unity and C2Ray and found differences. Unity is more limited compared to C2Ray, which is broadly accessible to game developers.”

To promote the game browser, Maxthon is teaming up with a game enthusiast on a promo. JamesBl0nde from MMOHuts will play a walkthrough of the Original Blood game on MXPlay today at 11 a.m. Pacific. On the Twitch livestreaming service, James will offer a behind the scenes look at creating MMOHuts’ signature First Look videos for online games.

Mattson said that the browser has become the favorite of pro gamers who play web-based games in professional tournaments. It also offers a split-screen feature on the desktop. Maxthon says it can render web pages on Windows, Android, and iOS faster than any other web browser. Maxthon is now expanding in the U.S. market.

Jeff Chen, a student in Singapore, created the browser in 2003 out of frustration. He was tired of the poor performance of the big browsers and found an abandoned project dubbed MyIE. He decided to craft his own browser, dubbed MyIE2. He formed the company in 2004 and kept adding features. In 2005, Chen renamed the company Maxthon, and the browser became the first one with tabs. Then it added sandboxed tabs in 2007 for added security. In 2008, Maxthon offered cloud-based services for syncing bookmarks and history.

With memory management, Maxthon allows you to pick up where you left off, no matter what you were working on, with any of your Internet-enabled devices. In 2010, Maxthon came out on Android, and it has reached more than 500 million downloads to date on that platform. In 2011, the browser came out on Android tablets. Maxthon is also getting chip makers such as Intel and Advanced Micro Devices to support its software in their hardware. The company received one round of funding from Charles River Capital and WI Harper.

Beyond providing the browser games, Maxthon is also pushing a strategy for HTML5 games, or those built with the lingua franca of the Web. Maxthon provides HTML5 support in Android, allowing for high-quality video support and Web GL enhancements. Other new features include the ability to run 2D games at 60 frames per second on devices that can support such graphics. It can also run WebGL 3D graphics. 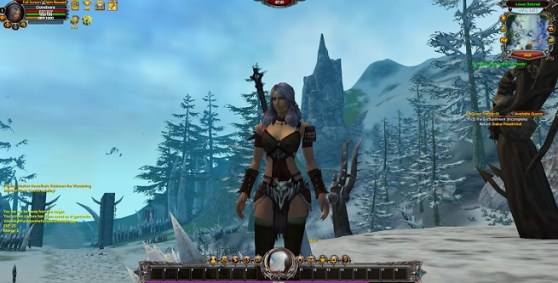