I had a little epiphany while shooting zombies in a demo that virtual-reality startup Survios staged. I could point my guns in different directions, like a hero in a John Woo action movie, shooting enemies that were coming from all sides. That was something I could never do in a video game, where I would have to point my guns forward at the limited field of view in a TV screen. Virtual reality delivered an experience that I couldn’t get any other way. And that’s pretty cool. 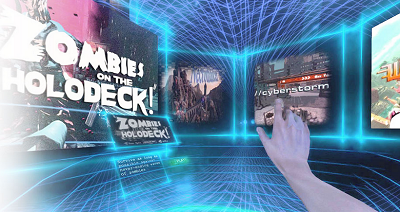 Above: The Survios virtual reality interface.

Virtual reality startups have momentum in the wake of Facebook’s $2 billion acquisition of virtual-reality headset maker Oculus VR. Now, VR isn’t a fantasy. It’s a real business with a growing ecosystem, even though Oculus VR hasn’t released its commercial product yet.

The world’s interest in virtual reality is waxing, and that’s good for startups like Survios, which is moving in Oculus VR’s slipstream. It is benefiting from all of the excitement and publicity around the deal with the social-network heavyweight. The Facebook-Oculus combination will accelerate the consumer deployment of virtual reality, but it is not the be-all and end-all for VR. I’m convinced that this sector will be both wide and deep, extending well beyond gaming. While Facebook is hiring a lot of the virtual reality talent — like a trio of experts from game maker and digital distribution king Valve — the industry is becoming a movement that stretches beyond more than just one company.

Virtual reality can deliver unique and immersive experiences that you can’t get from playing a video game on a console in your living room. I saw that at Survios and at Jaunt, a Palo Alto, Calif.-based startup that raised $6.8 million to create 360-degree cinematic videos.

I got wind of Survios from Michael Chang, a veteran game investor and former corporate buyer at Electronic Arts. Survios is another young virtual reality software company in Los Angeles. Headed by James Iliff and Nathan Burba, the company was born at the University of Southern California’s Mixed Reality Lab, the same place where Oculus VR founder Palmer Luckey learned his trade. Iliff and Burda and a bunch of others on their team worked on something that they called Project Holodeck, named after the virtual-reality simulator first seen in Star Trek: The Next Generation. They finished work on that last spring and started Survios shortly after that.

Survios and Jaunt are both making contributions to the growing virtual-reality field.

“It totally feels like we’re standing on the shoulders of giants,” Iliff said in an exclusive interview with GamesBeat. “We want to move virtual reality forward. We believe in it as a medium.”

This kind of VR doesn’t tether you to a desk. You can move around and truly express yourself. You get a 10 feet-by-10 feet playspace to move around in, and the systems track the movement of your head, face, and hands. You get a wide field of view, so that you stay immersed in the simulation even when you glance aside with your peripheral vision. The scenery and graphics aren’t perfect. But I didn’t motion-sick from the demo. 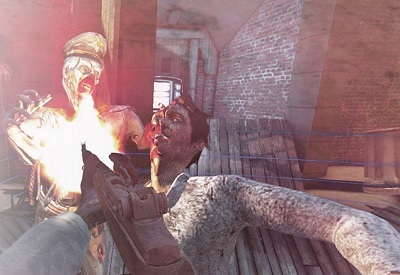 Above: Zombies on the “holodeck.”

You wear a backpack that includes both a battery and the actual gaming PC the sim’s running on. In the future, the system will be wireless and less bulky. Sixense is already at work on a wireless version of its VR hand controls. The whole system may cost a couple of thousand dollars right now, with the computer. But it will get cheaper over time.

“Our goal is to just put you in a headset and give you the controls and then transport you into virtual reality,” Burba said. “We see where virtual reality and entertainment are going. You can see it heading toward that Matrix moment, and that’s why we named our work ‘Project Holodeck.'”

As you can see in the video below, I played the Survios demo until I was sweaty. Iliff trained me how to use my hands to load and fire a shotgun, string a bow, toss a grenade, and dual-wield two pistols, akimbo style. In a video game, I would just be pulling a trigger and mashing a button. But with Survios, I was doing different things with my hands. In the “Zombies on the Holodeck” demo, I was able to look around 360 degrees. The zombies came at me slowly at first, but then they started moving faster and faster. I had to shoot wildly with my unlimited ammo and keep spinning around to fight off the horde. As the zombies closed in on me, I had to stop aiming. I just started shooting in every possible direction.

“Welcome back to reality,” Iliff said after I was done. “You were totally Rambo-style.”

That’s just one of four demos that Survios has been working on for almost a year.

Speaking about the Facebook-Oculus deal, Iliff said, “This is not just a big moment for VR, it’s a watershed moment for our culture. The way we interact together over the Internet is once again about to dramatically transform. The biggest problem with social interfaces like Facebook is that text does not translate as well as talking face-to-face. This will change. You will be able to talk and interact face-to-face in VR, like real life, as easily and simply and remotely as posting a message Facebook. I would imagine this is where [CEO] Mark Zuckerberg sees the technology going as a social platform.”

Iliff doesn’t feel like virtual reality is on a straight path. He sees it spreading out. Jaunt chief executive Jens Christensen said his team is literally creating the cameras that filmmakers will use to create their 360-degree cinematic videos. Once those tools are stable, the real artists will be able to create much better content that will take full advantage of what VR can offer, he said.

“There’s still so much left to discover in terms of technology, usability, and entertainment,” Iliff said. “It is going to be the Wild West for quite some time yet, akin to the 1890s with film technology. We didn’t nail that down until the 1920s. We want to enable all kinds of companies to do this.”

Survios is still figuring out its future, which may involve crowdfunding money for particular games. I’m pretty sure it’s going to turn into something big. The venture capitalists will eventually swarm all over it, in hopes of bankrolling the next Oculus.

Elsewhere, game developers are getting excited about the possibilities.

“I have to say, I’m a huge Star Trek fan,” said Jade Raymond, head of Ubisoft’s Toronto studio, in an interview. “I love games, I love Star Trek, so needless to say I have this dream of the Holodeck. I also feel we’ve gotten a bit ridiculous with our controllers. I have tons of friends who used to play games when we were younger, and now they have no clue where everything is. Every game has its own controls. In terms of VR plus intuitive controls, I think games are going to take a leap forward. I’m excited about that.

“It’s definitely something cool. But we’re at the start of it. It feels like there will be a lot of steps to take before we get to a place where everyone has a device that can handle VR. It’s a good start.”

Asked what she would do inside the Holodeck, Raymond said, ” If I told you I’d have to kill you.”