Game designers played Tetris on the side of a 29-story skyscraper in Philadelphia on Saturday night.

The exhibition at Philly Tech Week‘s celebration of cool technology was one of a number of events that will celebrate the 30th anniversary of Tetris, which Alexey Pajitnov created in the former Soviet Union and Henk Rogers brought to the rest of the world. The spectacle was a great example of video game marketing at its finest, for the benefit not only of Tetris but the whole industry as gaming seeps deeper into popular culture.

Rogers, the managing director of The Tetris Company in Hawaii, was on hand to join the exhibition that Frank Lee, head of Drexel University’s Entrepreneurial Game Studio, put together. Lee created a working version of the famous block-puzzle game through a contraption that controls the lights of a 29-story building.

Above: The Tetris Company’s Henk Rogers.

In an interview with GamesBeat, Rogers said that Tetris has been downloaded as a paid game more than 425 million times on mobile devices in its history. People play billions of matches each year.

“It’s humongous,” Rogers said. “I love it. I’ve been playing around with a giant Tetris at Burning Man for the last seven years. This is an order of magnitude bigger.”

In the super-sized Tetris game, multiple players could go head-to-head in a battle that people on either side of the city could watch. Several thousand people came out to witness the event.

Lee made news last year when he created the world’s largest video game, displaying a working version of Pong on a Philadelphia building. This time, Lee wanted to outdo himself with a bigger extravaganza.

The new experience is a two-sided game of Tetris occupying more than 100,000 square feet of Brandywine Realty Trust’s Cira Centre building. Last year’s Pong took up 59,800 square feet as part of a promotion for the Philadelphia Museum of Art.

Check out the Tetris installation in the video below. 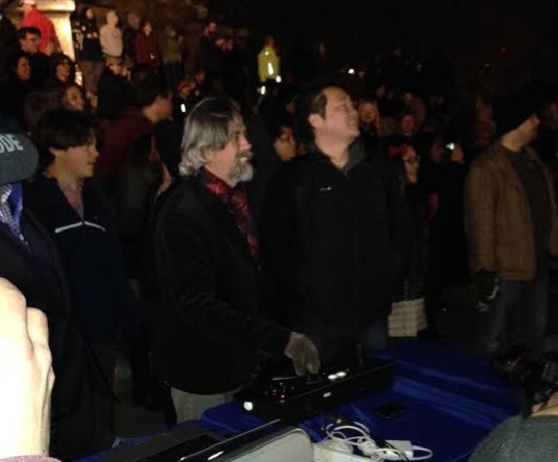