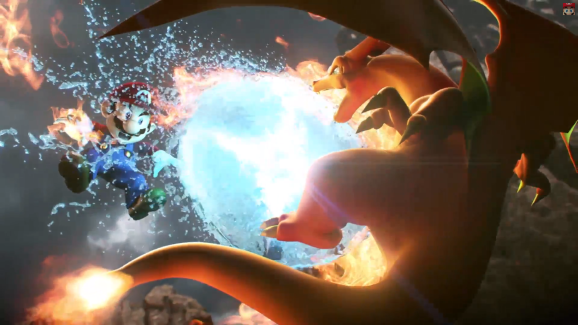 Charizard and Mario battling in Super Smash Bros. for Wii U and 3DS.

Nintendo finally told us when we’ll get to play the new Super Smash Bros. (and the release dates are different for the 3DS and Wii U versions), and now it’s also showing off a pair of new characters. Hope you like pocket monsters.

The big, red dragon Charizard and the martial arts-loving frog Greninja are both playable characters in the fourth installment of Super Smash Bros. Nintendo debuted them both at the end of today’s Nintendo Direct streaming news show that exclusively focused on the upcoming mascot-brawling title.

Charizard is returning from his first appearance as a playable character in Super Smash Bros. Brawl for the Wii. He will have many of his classic attacks, including the capability to breathe fire. Charizard is the final evolution of the Charmander, which is one of the three starter Pokémon from the original Red and Blue releases for Game Boy.

Greninja is making his Smash Bros. debut. He will have water and fighting abilities since the word “ninja” is right in his name. Greninja is the final evolution of Froaker, one of the starters from Pokémon X and Y — the most recent release in the series for 3DS.

You can see both near the end of this video:

The publisher also detailed some changes to franchise favorite characters, and it revealed that the game is hitting the 3DS this summer, with the Wii U release not coming until winter.

Charizard and Greninja join a cast of confirmed brawlers for Super Smash Bros. that includes a number of Pokémon and characters from other Nintendo (and other publishers’) franchises. Here’s the full, up-to-date roster: