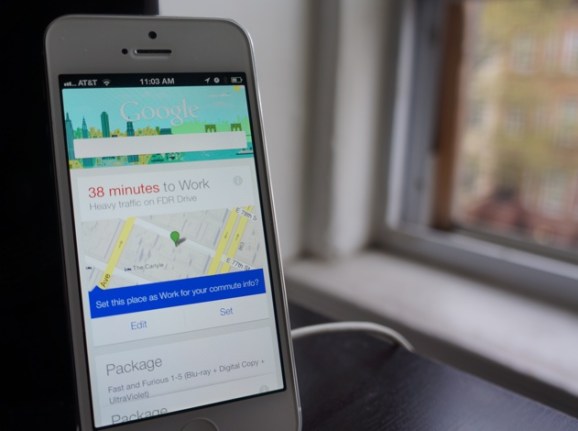 Google Now on the iPhone

Max Wheeler is the CEO of Alminder, maker of the predictive Mynd Calendar app.

Lately, there’s been a lot written about “predictive apps.” Solutions, such as Google Now, Apple’s Siri, and mobile apps like our own Mynd promise to relieve a lot of life’s tedium by doing the work for you, and giving you the information you want when you need it most.

As the app ecosystem evolves, mobile devices improve, and costs for mobile services lower, people are relying on their mobile phones to help them more often than ever before. Mobile texting, scheduling and social networking are all on the rise. As mobile usage increases, so too does the ability of companies to learn about and respond to their user’s needs and intent by leveraging predictive technologies that rely on machine learning.

As “predictive apps” accumulate more information about a user’s behavior and interests, they not only know where you are, but in many cases can predict where you’re going. They can also guess what you will buy while you’re there and who you’ll meet.

[We’ll be exploring the biggest growth opportunities for mobile, including the potential of predictive apps, at our Mobile Summit next week. Request an invite here!]

It’s also feasible that if this app knows your dietary preferences (say, if you’re vegetarian or gluten free) that the app might also display only the restaurants that can cater to your needs. If the app also has access to your calendar, knows the current time and can tell what you were doing on your phone before you started your search, it could also guess what time you’re looking to dine and help you make a reservation.

It’s hard to argue that predictive apps don’t bring some great opportunities for the user, and perhaps also some appealing opportunities for brands and advertisers. The problem predictive app developers (and therefore consumers) face is that these technologies have the potential to go too far — that is, to be used in a way that users find somewhat creepy rather than helpful.

Using the same example as before, if for example, a predictive restaurant app is connected to your social network and knows something about your friends, it could also suggest you invite a specific friend that lives nearby and cross reference their ability to join you for the meal. Some people might think this is cool. Others might think it is intrusive.

The thing about predictive apps is that they do more than crunch numbers — they actually monitor user habits and can easily creep over from useful to disconcerting in seconds. Not only is this combination of personal forecasting often intrusive, but it also risks pushing users away with the near-dystopian and somewhat spine-chilling future that it promises.

In addition, the reality is that many of these predictive apps can get things wrong sometimes. With some regularity, users may either get irrelevant or just plain incorrect recommendations from predictive apps. This is a side effect of a predictive algorithm that is operating on imperfect or incomplete data. Sometimes predictive technologies get it right, sometimes they get it wrong, but problems arise when errors cause an app to lose a user’s trust.

Almost certainly, predictive algorithms will get better and better over time, but there is a way to increase their quality right now: just ask the user.

Instead of always trying to “guess” what the user is going to be interested in, based on what various sensors and data streams indicate, I believe algorithms should simply let the user “tell” them what they want — particularly as these apps are getting to know a user’s preferences. With this approach — allowing for regular and constant user feedback — it’s easier for app developers to gain and retain a user’s trust while knowing where to draw the line.

For example, in a predictive smart calendar app, if a user creates an event called “Date Night – Dinner and Movie,” then that’s a pretty good signal to the app that it should do some work on the user’s behalf. If there’s no location noted in the event, then the smart app can go and find restaurants with good reviews and tables available, perhaps even using past experiences to guide the selection process. And, with each restaurant recommendation, the smart app should be able to list local movie times in nearby theaters, again, using past experience to focus on certain types of movies that it thinks a user will like.

Another good example of how this might work can be seen during the vacation planning process. Let’s say you are planning some time away and you know the general dates you want to go, but you have no idea where you want to visit. When you plug in the vacation time frame into your smart calendar app, that’s an expression of intent, which should trigger the predictive app to start reviewing airline, hotel and transportation options.

Alternatively, if you’ve indicated you want to go to Hawaii but aren’t sure which island, the app should be able to help you hone in on options of where to stay based on parameters you set like cost, flight time and interests.

Moving forward, mobile services that leverage predictive algorithms can be improved dramatically if they get regular feedback from their users. Just like any real personal assistant, communicating back and forth clearly is what really matters. Predictive algorithms and the apps that use them will continue to improve if they feature the ability to “listen” to the one person who really matters at the end of the day: the customer.