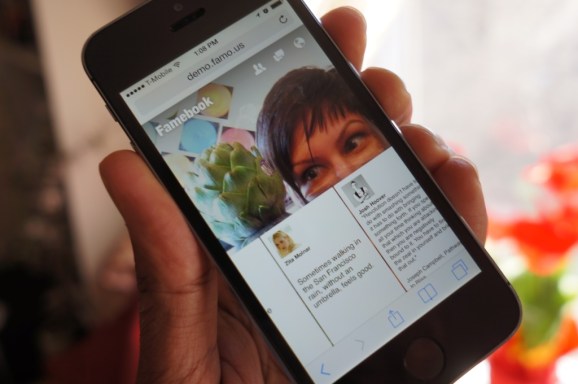 Get ready for round two of the HTML5-versus-native app debate.

After three years of development, Famo.us is today officially launching a public beta test of its Javascript framework, which lets developers create HTML5-powered mobile apps that are just as fast and fluid as native apps.

While the Famo.us pitch may just sound like marketing spin, the company has released a few demos showing off the potential of its framework. Below, check out a demo of Facebook’s Paper app remade with Famo.us, built by a new employee at the company in just a few days:

After Facebook and LinkedIn famously postponed their ambitious HTML5 app plans, it seemed as if most developers were ready to give up on HTML5 apps altogether. Famo.us founder Steve Newcomb was one of those HTML5 doubters.

[VentureBeat will be exploring the biggest growth opportunities in mobile at our Mobile Summit next week, including the role of HTML5. Request an invite here!]

Newcomb sold the natural language processing company Powerset to Microsoft in 2008 for $100 million. Eventually, he decided to focus on HTML5, even though he thought it had serious problems at the time.

That led to a surprising discovery, which Newcomb calls the “original sin” of web browsers: Every browser relies on archaic rendering and graphics engines, which severely limits the speed of apps that rely on them. Remember, browsers were originally built for simple text and images, and not the complex web apps we’re seeing today. Even though web standards have advanced, they haven’t yet matched the capabilities of native apps.

With Famo.us, Newcomb plans to deliver us from the “original sin” of browsers with the company’s own JavaScript-based 3D rendering and physics engines, which will replace the engines developers currently rely on in browsers.

Famo.us will be free and open source, though it plans to eventually offer optional cloud services that developers can subscribe to. The company plans to relaunch its website tonight to open up the framework to all. Famo.us received more than 70,000 signups for its private beta test, so the company is bracing itself for a strong response to the beta test.

Thanks to the recent JavaScript war between Google, Apple, Microsoft, and Mozilla, Javascript is now around 80 percent as fast as native apps, Newcomb points out. That makes it the ideal tool to speed up HTML5 capabilities.

“People who understand JavaScript adopt [Famo.us] within twenty minutes,” Newcomb says. “Within a week, they can build a Twitter app with live data.”

So why hasn’t anyone thought of this before? As Newcomb explains it, he and his co-founder Mark Lu weren’t web developers, so they approached the HTML5 dilemma in a different way. Specifically, they were inspired by techniques in the Unreal 4 and Unity gaming engines.

“You have to have a person with gaming, rendering engine, and physics experience,” Newcomb said. “If you take those people and ask them if they’re interested in fixing HTML5, nobody would do it. Only a very rare breed of person would go after it. The people in Famo.us are not traditional web engineers.”

Above: The Rise app recreated on Android using Famo.us

Though Famo.us will likely spawn a resurgence in HTML5 powered apps, Newcomb doesn’t see them as directly competitive to native apps. Instead, he hopes it will encourage developers to build hybrid apps by implementing HTML5 in their native apps. If anything, he says the company’s real competitor is Xcode, Apple’s developer environment for iOS and OS X coders.

“Now that we have a Ferrari engine, we’ve been busy building the rest of the framework around that,” Newcomb said. The company focused on making the framework easier to use for developers, and today’s it’s also launching Famo.us University, a site that helps developers easily learn the intricacies of the framework.

The company will also soon launch a service that lets developers easily get their apps into App Stores. That service will turn Famo.us into be a direct competitor to Phonegap, which also lets developers build web apps and deploy them to App Stores. Newcomb claims the Famo.us app deployment service won’t affect performance, whereas PhoneGap is notorious for slowing down apps.

Famo.us has also brought on Dave Fetterman, the former Facebook engineering manager who helped promote and eventually kill that company’s HTML5 app a few years ago. While he wouldn’t say he feels vindicated yet, Fetterman told us, “Everything is there. The question is how does this fit with what people want. … We want to see how things go when we go to an audience of millions. That’s the first real test.”

Famo.us is likely just one of many companies that will tackle HTML5 over the coming years, but at this point it seems like the leading candidate. And if it’s successful, it could change the web as we know it.