In Marvel Puzzle Quest, players can spend their in-game hard currency on “Covers.” Covers work much like cards in a card-battling game. Players can use them to both unlock new heroes and upgrade existing ones through a fusing mechanic.

With Marvel Puzzle Quest, we believed that the majority of our revenue would come from selling these “cards,” so we zeroed in on a total overhaul of this UI. We developed these changes to the store in November and went live in early December. To make those improvements, we went to school on the designs seen in the top-performing card battlers.

Here’s the before and after for Marvel Puzzle Quest: 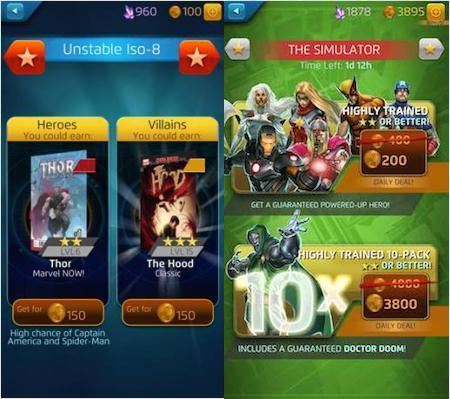 Above: Before (left) and after.

As you can see, the Demiurge team implemented the following:

The results of these changes were great. Over the past couple of weeks, about 90 percent of Hero Points spent on our nonevent Heroic cover packs were spent on the 10-packs. Clearly, we were hindering our spend just from the added friction of needing to tap on the cover packs over and over again. The daily deals are popular as well. Ninety-seven percent of purchases of the standard single-pack are for the daily deal price.

It’s hard to prove a causal relationship between a design change like this one and an uptick in ARPDAU (average revenue per daily active user), but the before/after of this change looks to have been a solid 20 percent bump by itself. Shortly after deploying this change, we rolled out a revised event infrastructure which compounded this bump.