HTC fans have an underdog complex.

Before Samsung’s Galaxy series became so prominent, HTC was the top Android manufacturer in the world. Last year’s One phone was a reminder of those heady days.

But even though HTC claimed the One was its best-selling phone ever, it wasn’t enough to turn around the company’s dire financials.

So here we are with the new One, which improves upon last year’s flagship phone in just about every way. It features a bigger screen, a significantly faster processor, and an improved all-metal case. (At this point, this seems to be the common refrain for all new gadget reviews.)

And as I mentioned in my interview with HTC’s design leads, it’s the company’s most important phone to date.

It’s also a phone I’ve been looking forward to for some time. Last year’s One was the first Android handset that felt as well-made as Apple’s iPhone to me — so much that at the time, I ended up dumping it in favor of HTC’s device.

I found a lot to like about the new One after spending a week with it, but I was also constantly reminded of things that I wished HTC improved on more. It’s ultimately a solid upgrade over last year’s model, but it may not be the massive improvement HTC needs.

In my initial hands-on with the new One, I called it the Cadillac of smartphones. That characterization seems even more apt now that I’ve spent some time with it. It’s big, shiny, and bold, like a classic Cadillac — but it’s definitely not a style that appeals to everyone.

HTC doubled down on its metal unibody design from last year. Now the phone’s metal case wraps all the way around, whereas last year’s One had a bit of plastic on its sides. The new One is now also better contoured to fit the curves of your hand, and the new polished metal case gives it a luxurious feel. But while the metal case does a good job of protecting the rear and sides of the phone, the One’s front bezel is unfortunately more prone to nicks and scratches (more on that below).

Thanks to its 5-inch screen, HTC also had to make the new One slightly taller than last year’s model. It’s not a big change, but for some, it may make the new One difficult to hold with a single hand. (Then again, the new Samsung Galaxy S5 is around the same height, so consumers may just have to get used to bigger phones this year.)

The bigger screen is noticeably brighter than its predecessor, though you don’t always get access to the larger display area. This time around, HTC implemented the Android menu buttons via software, and not through permanent capacitive buttons. That means the Android keys appear and disappear depending on what you’re doing, and in some cases they end up using precious screen space. Still, moving to software Android keys brings HTC in line with most other Android phone makers (and it’s something Google has been pushing for a while).

At this point, it seems like it’s a given that the new One, like most other new smartphones, is a speed demon. It’s powered by Qualcomm’s newest quad-core chip, the Snapdragon 801, and 2GB of RAM. It feels noticeably zippier than last year’s One, especially when it comes to loading up hefty apps and games. But you’d be forgiven for not seeing a huge speed difference between the new One and any of last year’s quad-core Android phones. We’re long past the point of diminishing returns for smartphone processor speeds.

HTC also made some big upgrades to the One’s Blinkfeed, a defining feature of its Sense software that displays news and social media updates right on your Android home screen. HTC has finally opened up the Blinkfeed to third-party developers (something that was promised last year), and it has also redesigned the feature to focus more on large photos and headlines.

I liked Blinkfeed a lot with last year’s One, and this latest version is even more convenient for glancing at news. (HTC will also make its new Sense software available to owners of the previous One.)

Among other updates, I also appreciated the new Boomsound stereo speakers, which are louder and more detailed than last year’s version. HTC has also implemented a few new useful gestures, including the capability to double-tap the screen to unlock the phone, and swipe gestures from the sides to get directly to the Blinkfeed or your last open app.

Unlike every other smartphone on the market, the new One sports two camera sensors on its rear. One houses the 4-megapixel “Ultrapixel” camera we saw last year, which makes up for its low resolution with larger pixels for low-light photography.

As HTC design guy Drew Bamford told us last month, “It’s actually a new module with the same number of pixels [4MP] and the same size of pixels, but with new firmware that will give you better results.”

The second, smaller sensor captures depth data, which opens up new features like the ability to readjust the focus of a picture after you’ve taken it. Other depth-enabled effects can highlight the foreground subject in a photo, as well as turn a photo into a trippy, 3D-like experience (allowing you to tilt the camera to view different angles of a photo).

I was able to make some so-so pictures look truly gorgeous after tweaking their focus settings. If you’ve ever dreamed of being able to re-create a DSLR’s shallow focus with your smartphone, the One has got you covered.

HTC also packed in a new 5-megapixel front-facing camera in the One, which makes it an ideal selfie machine.

Unfortunately, I wish HTC worked as hard to improve the One’s core camera sensor as it did to utilize the new depth sensor.

Below, check out a few samples from the One’s camera. Click the photos for full-sized versions.

HTC made a big deal about its Ultrapixel camera last year, which seemed like a breath of sanity in the megapixel race. But while it lived up to the company’s claims for low-light photo quality, last year’s One had trouble matching the sharpness of competing cameras. The Ultrapixel camera was particularly disappointing in brightly lit scenes, where those big pixels tended to bring in too much light and blow out the photo.

Strangely, most of those issues remain with the new One’s camera. Even though HTC is using a different sensor part, the 4MP Ultrapixel camera is pretty much the same as last year. (Does it make any sense to have a front-facing camera that actually has a higher image resolution than the rear camera?)

As you can see in the gallery above, the new One still blows out images when there’s too much light, and complex scenes with trees don’t look as detailed as photos from the iPhone 5S and other smartphones.

The company was aware of the criticisms of last year’s camera, but it still thinks the Ultrapixel method is the best balance for most photos.

As Bamford told us in an interview during the One’s launch, “What we’re trying to do is solve for the most frequent use cases. A lot of people are taking photos indoors in dim lighting, and we really want to optimize for that.”

Yes, the new One is once again a champion at low-light photos. But at this point, it seems unfair to force consumers between that and sharp daylight photos. Given the quality of images we’re seeing from the iPhone 5S and all of Nokia’s “PureView” camera smartphones, the One’s core camera quality is inexcusable.

Another issue worth mentioning: The One’s front bezel clearly isn’t as strong as the rest of its metallic case. I dropped the phone once on a wooden floor, and I immediately notice some slight chipping on the top of the bezel (below). 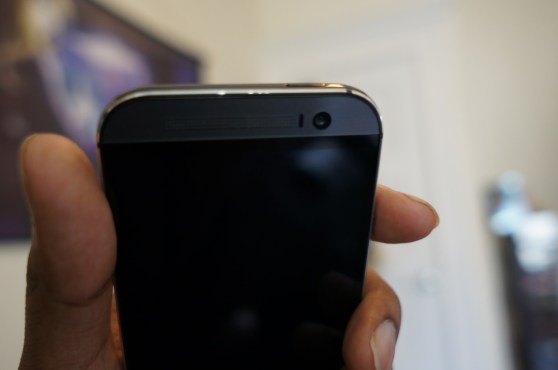 Above: The One’s front bezel started chipping after just one fall

The verdict: A decent upgrade that doesn’t go far enough

It’s a shame that HTC gets so much right with the One, but a widely known issue from last year continues to haunt it.

The new One remains one of the better Android phones on the market, especially if you can stomach the slightly lower photo quality, I’m just disappointed it’s not a phone I can recommend without any hesitation. That’s especially disheartening given just how much HTC needs this phone to succeed.

The company is also pursuing a new marketing strategy this year, so perhaps the One’s camera issues won’t keep consumers away. Then again, HTC’s new ads (starring actor Gary Oldman) are all focused on “asking the Internet” about the One’s superiority — that’s not exactly a smart suggestion when most of the Internet is complaining about the camera.