NASA and SpaceX are blasting a bunch of lettuce into orbit.

As part of the SpaceX-3 resupply mission to the International Space Station, SpaceX’s Dragon craft is carrying a plant growth chamber called Veggie. U.S. astronauts aboard the ISS will conduct NASA’s Veg-01 experiment, which will assess the feasibility and safety of growing vegetables in space.

Veggie packs plants into special “pillows” with a flat-panel light bank and red, blue, and green LEDs. The Veggie system provides the lighting and nutrient delivery but relies on the cabin’s temperature and carbon dioxide to facilitate plant growth. 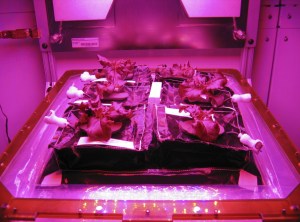 Above: Red romaine lettuce plants grow inside in a prototype Veggie flight pillow.

“Veggie will provide a new resource for U.S. astronauts and researchers as we begin to develop the capabilities of growing fresh produce and other large plants on the space station,” Gioia Massa, NASA payload scientist for Veggie, said in a statement.

“Determining food safety is one of our primary goals for this validation test.”

Madison, Wis.-based Orbital Technologies developed Veggie through a small business research program. It collaborated with NASA engineers to get the hardware certified for use inside the space station. The unit weighs around 15 pounds and is roughly the size of a normal microwave, according to NASA.

Not only could the Veggie system help astronauts eat fresh food more regularly — a rarity 200 miles above the earth — but the recreational gardening may help them feel less out of touch with our blue planet.

“You could also think of plants as pets,” said Massa. “The crew just likes to nurture them.”

This resupply mission launch will be a boon for in-orbit research — and not just because of the Veggie system. The Dragon payload includes materials for the T-Cell Activation in Aging investigation, which aims to improve our understanding of immune system depression in microgravity. The spacecraft is also carrying the Optical Payload for Lasercomm Science (OPALS), a prototype laser communications systems; and the High Definition Earth Viewing (HDEV) project, which will offer live streams from space via four cameras destined for the exterior of the ISS.

This is SpaceX’s third resupply mission. It’s been delayed twice: on March 14 and again on March 30. But the SpaceX craft and its 3,347 pounds of cargo are all set to launch today at 4:58 PM Eastern, despite an unresponsive backup computer that controls some of the robotics aboard the ISS, according to NASA.

We're moving forward w/ the launch of @SpaceX 3 to the #ISS on Monday at 4:58pm ET Updates: http://t.co/1KiRxSU7tA  pic.twitter.com/gsMiVrqlMg