It makes sense because previous Civilization games end as you grow your empire to the point where it can begin space travel. In this case, it looks like the game will start with space travel, and players will lead their people to colonize alien planets. The title could pump some new life into a rich game series that traces its roots back to the original Civilization of 1991. And legendary game designer Sid Meier is still lending his name to the effort.

“The Civ team was excited about the opportunity to continue the story of Civilization into the future, because it allows the team to break free of historical context,” said Meier, director of creative development at Firaxis Games, in a statement. “We’ve always let our fans create the history of mankind, and Civilization: Beyond Earth will now let them create the future.”

I’m pretty excited about Beyond Earth, since I had a blast playing another space-based, Civilization-like game, Sid Meier’s Alpha Centauri, when it debuted in 1999. Civ games are turn-based strategy titles that always have you addicted to playing just “one more turn” before you go to sleep, so you can see the outcome of your strategic moves. This title shows that global warming has gotten so bad that humanity is forced to move to the stars for survival. 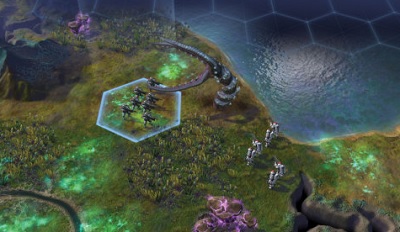 Whereas most past Civs began in the ancient times, this sci-fi edition will pit players against each other as they try to survive the leap to the frontier in space. Players will be in charge of factions with contrasting cultures and will evolve their people based on a chosen destiny. They can opt for new gameplay possibilities such as nonlinear technological progression, deeper customization of factions, and unique alien worlds.

Players will establish a cultural identity, select a leader, and sponsor an expedition by assembling the spacecraft, cargo, and colonists. Those starting choices will directly impact starting conditions when arriving on a new planet.

The alien world will have its own ecosystem, dangerous terrain, mystical resources, and hostile life forms. Players will have to build outposts, unearth ancient alien relics, tame new forms of life, develop flourishing cities, and establish trade routes to create prosperity for their people.

The tech tree will be different from past games, where you followed one invention or discovery after another. The new path will be nonlinear and involve different broad themes, each with a distinct victory condition. There will be quests related to the fiction of each planet, and the game will have side missions that aid in the collection of resources, upgrading of units, and advancing in the game.

Players will also play on a new orbital layer, where they can deploy advanced military, economic, and scientific satellites that provide strategic offensive, defensive, and support capabilities from orbit.

The is the first new major Civ game since Civilization V debuted in 2010. 2K showed off its new trailer at the PAX East game fan event over the weekend. The game will also come to Mac and Linux via developer Aspyr Media.

“Having celebrated its 23rd anniversary last year, Civilization has cemented its reputation as one of the greatest and longest running franchises in video game history,” said Christoph Hartmann, president of 2K. “Sid Meier’s Civilization: Beyond Earth builds upon that success by pushing the series in new directions with players exploring an unknown future on an alien planet.”

The game will take advantage of Microsoft’s DirectX 11 graphics platform, but it will also be enhanced with better graphics through AMD’s new Mantle graphics applications programming interface.