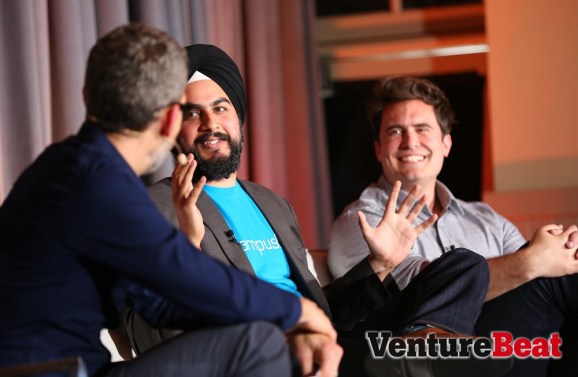 Matt Marshall of VentureBeat, Jesse Pujji of Ampush, and Peter Hamilton of HasOffers

Accurately measuring the effectiveness of mobile ads is the “circulatory system” that is critical to the health of the mobile ecosystem, but coming up with the right way to do that is easier said than done, according to mobile measurement experts who explored the topic today.

The talk was part of the opening session at VentureBeat’s Mobile Summit on Monday in Sausalito, Calif. Peter Hamilton, chief executive of Seattle-based mobile ad measurement firm HasOffers, said during the session that tracking ad performance is a necessary part of the industry, but the business is young compared to ad-tracking on the web and the rules aren’t always clear.

“We don’t have a lot of systems for going down the rabbit hole,” Hamilton said.

Matt Marshall, founder of VentureBeat, opened the session with a comment about how advertisers need to create the right ad for the right person at the right time. To make that happen, they need to come with the right type of ad that people will pay attention to. On mobile platforms, banner ads don’t work that well. Video ads are better, but nothing is perfect, as noted in our new report on mobile ads in games. He asked if the industry was as broken, as he recently asserted in an article on the dirty secrets of mobile marketing.

Jesse Pujji, CEO of mobile marketing platform firm Ampush, said, “Is [mobile ad marketing] broken? No. But it’s not where it needs to be.”

Hamilton’s company was built to provide insights like attribution, or measuring the effectiveness of mobile ads, such as those placed via Facebook and targeted at mobile gamers. HasOffer’s basic service is to measure how effective an ad was and whether a mobile ad campaign worked.

Another layer is reconciliation, or making sure that an advertiser pays only for the installs or in-app purchases that they’ve actually received, and that the right advertising entity, such as an ad network, gets the credit.

Hamilton said there has to be an “end to end loop” that allows buyers and sellers to verify and complete transactions.

“A lot of platforms sell ads based on impressions or clicks,” Hamilton said. “Now we are starting to see ad sales based on deeper interactions in the app. That’s more complicated, and you need someone who is nonpartisan, a pure tech play, who sits there and collects the numbers.”

We recently talked to 176 developers who make more than $600 million annually.
Here’s what they told us about mobile games monetization.

The problem is that mobile is still like the Wild West. Facebook recently cut off HasOffers and its rival Kontagent (recently renamed Upsight) from getting its data because the companies hung onto the data for longer than they were allowed to do so. Asked about that, Hamilton said that in hindsight, “I would have pushed for the parties to do the main agreement, and not have us get caught up in it. We are happy to facilitate. I believe there is a lack of really great technology” for measurement.

Now his company is working with other mobile platforms, such as Google, Amazon, Apple, and Microsoft.

This doesn’t mean that middleman companies like HasOffers shouldn’t exist.

But if there are too many middlemen, things get confusing.

HasOffers recently discovered that Apple is paying attention to the effectiveness of mobile ad measurement. In the new version of its mobile operating system, iOS 7.1, Apple will now allow developers to use a mobile user identifier — the IDFA, or a mobile equivalent of the desktop browser cookie — for advertising tracking purposes. Apple permits that usage in its advertising platform, iAds, so long as that developer states why they’re doing the tracking. Hamilton believes that will offer some reassurance to developers and advertisers that Apple is serious about enabling ad-effectiveness tracking.

“It’s not inside baseball,” Pujji said. “It’s a tracking mechanism and Apple came out on the ride side of the ecosystem. If you don’t let people track how they make money, they won’t make as much money. It’s as close to a cookie as you can get.”