With our cover store performing better, we moved on to optimizing our in-game events in late November. Events are a critical piece of our monetization puzzle because they provide the reason for players to spend currency in the cover store. 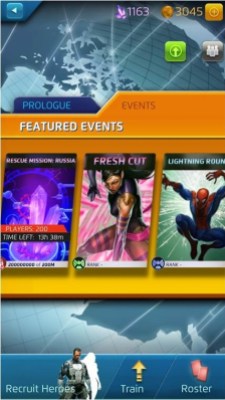 As most everyone in the mobile card-battler sector will tell you, Events are the closest thing to a silver bullet as you’ll find in free-to-play game design for both retention and ARPDAU (average revenue per daily active user). With Marvel Puzzle Quest, we followed the model of the most successful titles, including DeNA’s card battlers as well as Puzzles and Dragons, when building our event infrastructure, and it has worked wonderfully. We are an event-driven game.

Marvel Puzzle Quest is built on top of our cross-platform engine and server platform, “Seoul.” From the beginning, we knew that MPQ was going to be event-driven and so before launch, we invested in an effective backend to support our event gameplay. Had we not, most of the optimization below wouldn’t have been possible so it seems worth elaborating on the “bones” in case you need to add them into your game:

The central thesis of our monetization strategy is to think of Marvel Puzzle Quest as a subscription service. Essentially, we want the business of Marvel Puzzle Quest to be more like Netflix than like Call of Duty. We provide a steady stream of new content for players, and we hope they’ll find value in that content.

We had strong retention — many of our users had been playing for a long time. To justify the constant stream of characters and events, we needed those “older” players to find things worthy of their money as well of their time. We wanted to pull off this feat without pivoting our revenue away from the characters, which are durable goods! That was the challenge put forward to the design team. Here’s how we did it:

Most events feature a newly released character available in card packs at the start of the event. Like League of Legends, a certain hunk of our monetization comes from excitement about the gameplay and personality offered by that character.

New characters are always released first to players who top the leaderboard in a particular event, rewarding our most dedicated players with a chance to earn the character before they characters appear in card packs.

On the surface, it might seem that the below mechanics would put a huge strain on our player-base, but there’s an absolutely critical release valve in how we construct our event calendar. The top prizes in an event are always hyper-valuable in the next events. This design works a bit against monetization — we offer the hot new character to our most engaged players without event giving players a chance to buy them. However, it does a great job of rewarding players for performance and helps drive retention by pulling players from one event to the next. 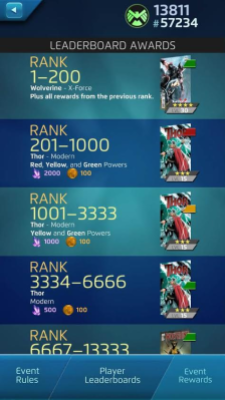 Certain missions called “team-ups” offer players a “loaner” version of a new character. These missions give us a chance to show off how fun it is to play with a particular character. By clearly presenting the value to the player, we hope they’ll spend some of their currency to purchase that character to have for future missions.

Players spend about 65 percent of their hard currency on card packs and ability upgrades. After the player has maxed out a character (which takes 13 cards), they can use it forever in every event we make. In a game where we want to have hundreds of hours of gameplay, using the same character forever can make for pretty boring gameplay. It is also clearly at odds with long-term monetization. In a way, we need to find a way to make these durable goods work more like consumables in our economy.

We solve both of these problems by making a different set of characters be more valuable in each event. From a design standpoint, this happens with a mechanic we call “powered-up.” Essentially these characters temporarily get an increase to their effective level. Playing with these characters while they are Powered-Up is enormously fun for players and also diversifies the rosters that get used in battles.

“Essential” missions are fights that require players to have a particular character. They are a “hard” gate compared to team-ups which provide a softer one. If a player wins a featured character or pulls one from a free card pack, we want to reward them by giving them an opportunity to use that new character to earn great rewards. These are also a tool for encouraging players to use a wider array of their characters in combat.

In PvE events, “Essential” missions typically offer more event points than other missions. As a result, these make a clear value proposition to the player: If they get this character, they’ll be more effective in events.

These mechanics are also used to create interesting variety in Versus events. We will come up with a theme, “God-Like,” for example, and select a handful of characters that fit that theme. Players will need to use one or more of these characters in every fight.

For some events, we only enable players to use around 10 characters. These events are generally extremely challenging for players, but they also add some really interesting variety to the game.

Before we had the right pieces in places, we’d run an event and see a gradual rise in revenue over the lifetime of the event and then a dropoff at the end. These trends correlated with engagement. As players played a lot, they spent more. That’s wonderful, but if you want to drive LTV (Lifetime value), you need to give the players something they value regardless of how many hours they spend playing.

Under these new systems, we see a sharp revenue spike at the start of our events as players are excited to get their hands on the new cover packs. To an observer watching the grossing charts on AppAnnie, these look pretty peculiar. Here’s a chart showing our ranking on the U.S. iOS top-grossing charts during the launch of a recent event:
The moment of the spike is exactly the time when a new event kicks off. If you dig into the charts of the more successful card battlers, you’ll see the same thing.

In the next part, we’ll discuss the specifics of the designs of our event-based cover packs and tackle the controversial topic of currency sales.