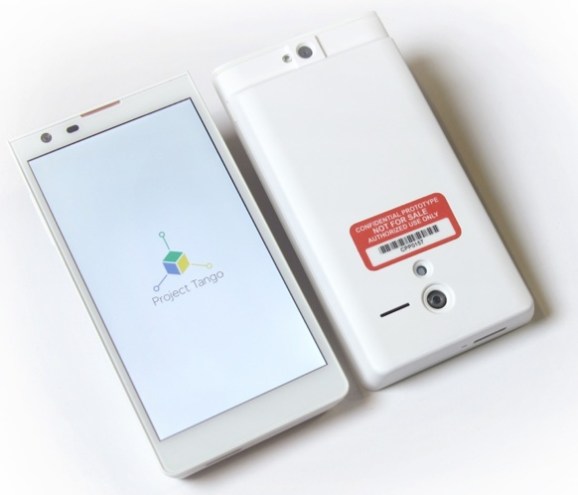 It’s a 3D world out there, and Google’s Project Tango intends to model it in real time with a smartphone.

Now, a teardown of the prototype development kit gives us some idea how the company will do it.

Like its Project Ara to build a modular smartphone, Google’s Project Tango originated in the Advanced Technology and Projects (ATAP) group, formerly part of Motorola Mobility. Google bought and then sold the Motorola division but kept ATAP.

Ara wants to deconstruct a smartphone, by creating a phone users can customize with functional modules. Tango, on the other hand, wants to deconstruct reality, taking a quarter million 3D measurements each second to create a real-time 3D model that describes the physical depth of its surroundings.

To find out more, community repair site iFixIt recently took apart the Tango prototype development kit. In addition to the above specs, they discovered a Snapdragon 800 quad core CPU running up to 2.3 GHz per core, 2GB of memory, an expandable 64GB of internal storage, and a nine axis accelerometer/gyroscope/compass. There’s also a Mini-USB, a Micro-USB, and USB 3.0.

A key discovery: an infrared projector with a series of infrared LEDs. When turned on, it projects a grid of dots that create a depth map not unlike Microsoft’s Kinect:

“How do you build the depth map? It certainly looks to us like nearer dots are smaller, and farther dots are more expanded. Measure the size of the dot, and you’ve got its distance from the projector.”

Additionally, the teardown indicates that this prototype would be fairly simple to repair because of the relative simplicity of its overall construction.

So, how long before an Ara phone will be able to become a Tango phone via the appropriate modules? Given that Google announced this week that it hopes to start selling the Ara endoskeleton is January for about $50, that clock has started ticking.