No matter how fast a car is, there’s always someone who’ll want to make it faster.

That’s why you’ll find as many companies tuning high-end cars as there are modifying pony cars or basic subcompacts. And it’s why Saleen, a particularly well-known tuner, is developing its own hot-rodded version of the Tesla Model S electric sedan. 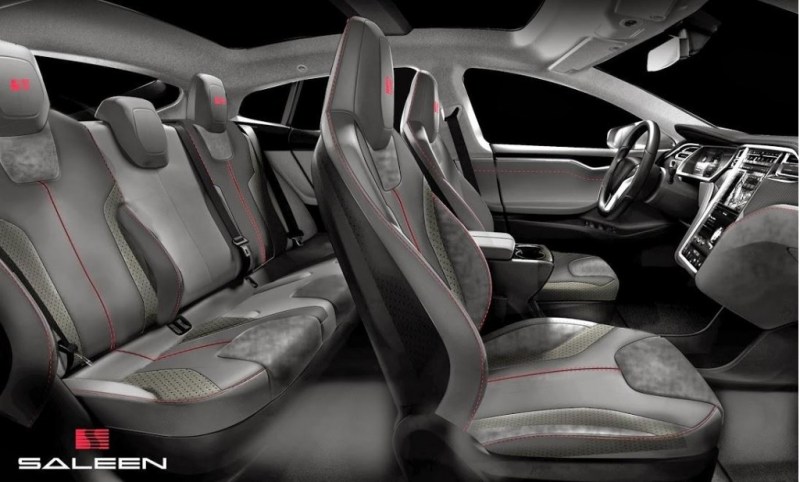 With over 400 horsepower at the wheels, it’ll reach 60 mph in 4.2 seconds, and only stop accelerating once it reaches 130 mph.

If the “mechanical enhancements” Saleen refers to in its press release for the new tuned Model S relate to its electric motor, that performance could be boosted further.

At the very least it should include a few chassis tweaks, made clearest in Saleen’s renderings by the use of the company’s signature alloy wheel design.

A series of aerodynamic enhancements are included too. At the front, Tesla’s large black grille design has been replaced by a new front bumper, complete with lower air intakes and a low-level splitter to bring the car closer to the road.

Side skirts do the same around the car’s flanks, while at the rear there’s a race-style diffuser and a tailgate spoiler. The diffuser and decklid trim between the rear lights is formed from carbon fiber, and one of the images shows the car rendered in ‘Orange County orange’ paintwork.

Inside, the Model S’s usually-leather interior has been retrimmed in a mixture of leather and suede-style Alcantara. This features red stitching and each of the headrests is decorated with an embroidered red Saleen logo–but otherwise, changes seem minimal.

Company boss Steve Saleen says he expects the car to be an “exceptional automobile”, but the “inspired design” of the Model S makes the process easier. “We stand on the shoulders of greatness for sure,” he adds.

Other details are likely to be revealed closer to the car’s launch, which is currently penciled in for the summer.