I’m a person of very average intelligence, so I always feel a bit guilty when I’m playing as a man many times smarter than me. And the hero of Moebius: Empire Rising, Malachi Rector, is much, much smarter me.

I mean, this guy has a photographic memory and flies around the world appraising antiques of incredible monetary and historical value, a task that only takes him a couple of minutes to complete. Sounds like the perfect star for an puzzle-filled adventure game.

Unfortunately, Moebius: Empire Rising, out now on Steam for PC and Mac, doesn’t give this savant a proper showcase. It’s a point-and-click adventure game that has too many blemishes to stand out.

The point-and-click adventure is a genre beloved by many, including me. While its heyday was back in the ’90s, recent games like Broken Age see the legacy live on. Moebius: Empire Rising plays much like the classics. You navigate your character by clicking where you want them to walk, searching for interesting objects to look at and pick up for use in future puzzles. You’ll also find plenty of people to talk to, and you often need to have something specific in your inventory before they’ll loosen their lips.

This stuff is gaming comfort food to me. If I could turn adventure games into a warm blanket, I’d probably snuggle myself inside and never leave. While none of Moebius: Empire Rising’s puzzle will wow you with innovation, they’re engaging and fun to solve, even if the solutions are sometimes a bit obvious. 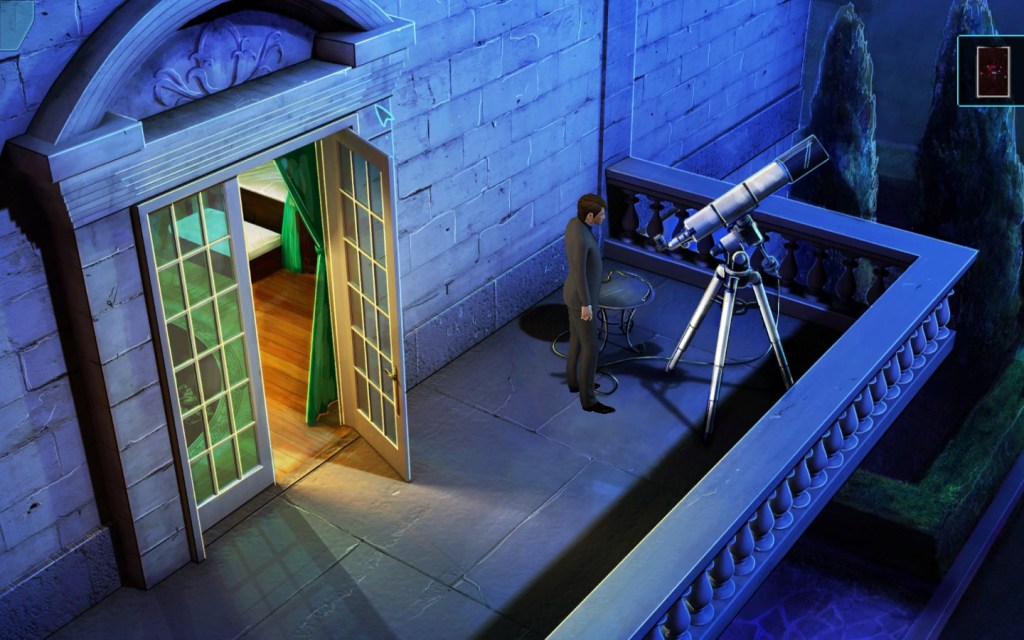 Above: The telescope has a USB outlet. You have a smartphone in your inventory. I’ll let you figure that one out.

One thing I can’t really do is compare this to its inspiration, the Gabriel Knight series. Moebius is a direct descendant of that adventure series from Sierra, the same studio behind other genre staples like King’s Quest and Space Quest. I was always more of a LucasArts guy, spending most of my time with games like the Monkey Island series and Day of the Tentacle.

Still, the old-school vibe is obvious. If you’re a fan who bemoans the loss of the ’90s, here’s another example of adventure games alive and well in 21st century.

Despite basing himself and his antiques shop in New York City, Malachi Rector’s quest takes him to a multitude of locations, including Venice, Cairo, and Paris. I’m always a sucker for these globe-trotting affairs. Nothing makes an adventure seem grander than scattering all of the clues and pieces across the world.

Besides, the constant change in scenery does a lot to help things feel fresh. You’re never stuck in the same location for more than a couple of hours, and you only revisit a few areas (mostly Rector’s New York stomping grounds). 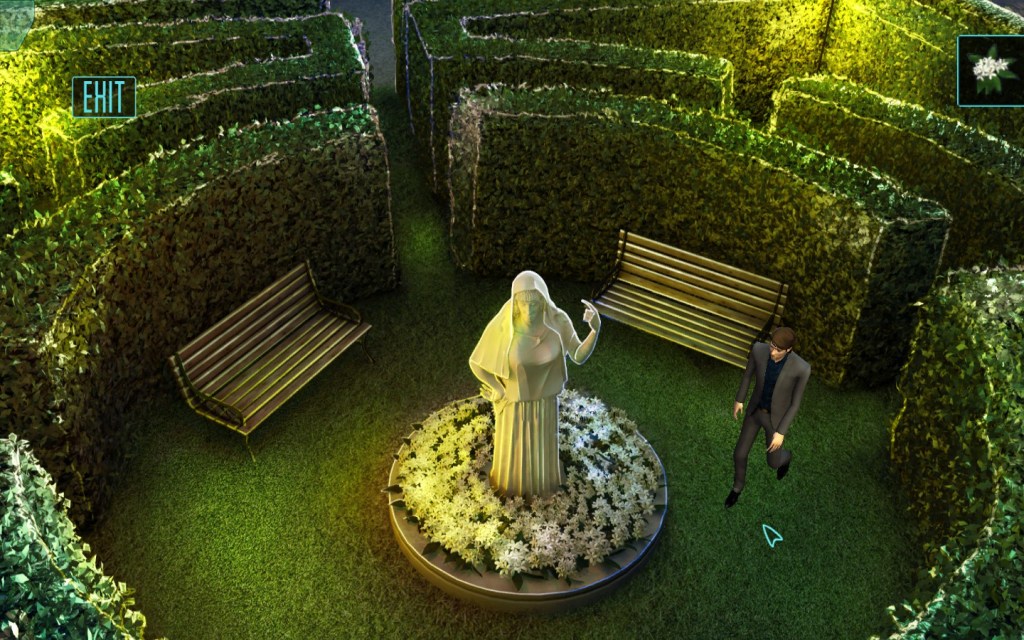 Above: Wandering around the garden.

It’s fitting that Moebius’ gameplay reminds me so much of the ’90s, because its technical qualities also look like someone plucked them from the later part of that decade. Most of the problems involve the character models. They all look a bit off. Sometimes their shoulders seem too high or their elbows bend awkwardly, and their eyes shift around the room in unnatural ways.

Yes, the character models are obviously limited by its modest budget, but the animations especially stand out. Nothing looks natural. It’s like an amateur puppeteer controls each character. They unnaturally walk around as if the world’s coarsest stick was permanently stuck in their patootie. And the things they do with their hands and arms while talking … well, I think an alien could do a better job trying to appear human after observing an Italian family dinner.

Again, I know that this is an indie game, but these shortcomings constantly remind that you of Moebius’s humble budget. The best developers could use their available assets to create something beautiful in spite of smaller production costs. 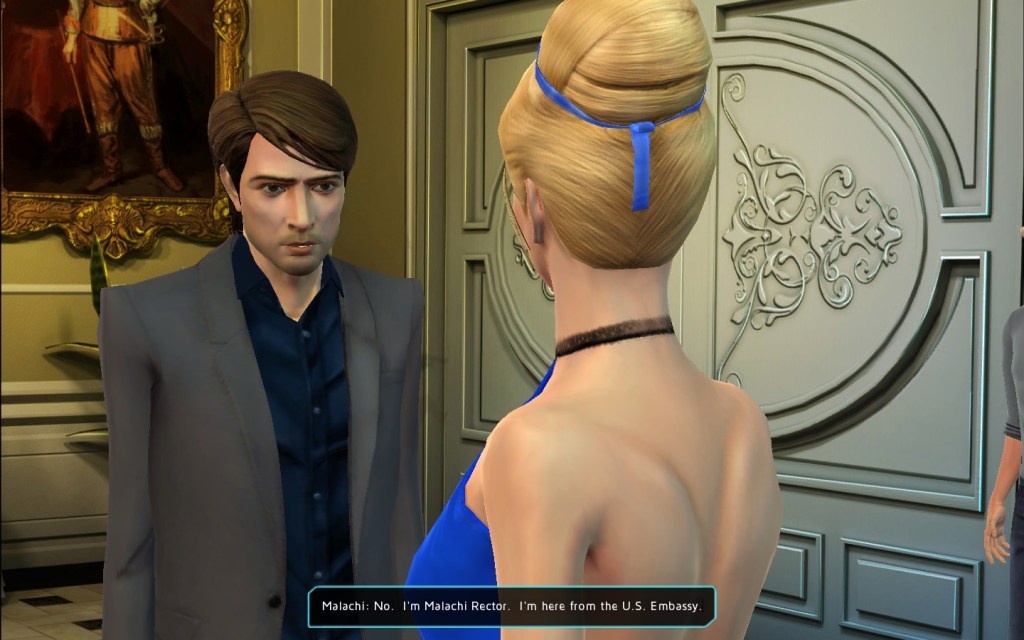 Above: Something about his posture just seems off.

Specifically, game crashes, which are especially brutal in an adventure game. If it crashes, you have no choice but to reload your last save and plow through the same narrative and puzzles you’ve already experienced until you’ve caught up.

I can tolerate a few hiccups, but I had Moebius completely shut down on me multiple times. With no autosave feature to ease some of the pressure, I had to save my game constantly for fear of losing any progress.

Moebius is certainly a competent adventure game, but it never comes close to reaching greatness. Sure, the technical issues are a part of that, but the story never really grabs you. While Malachi works as the protagonist, all of the side characters are forgettable or stereotypical, like the beautiful assistant who just can’t get close to her icy boss or the ex-military sidekick with a good heart and more loyalty than any man deserves.

None of it is all that memorable. The plot shows some promise with an interesting variation on reincarnation, but it’s not enough to break through all the clichés and blandness.

Moebius: Empire Rising is a decent adventure game that becomes harder to recommend because of its technical flaws. I can’t really tell you if it’s a worthy successor to Gabriel Knight, but fans will certainly enjoy the old-school joys of pointing and clicking their way through puzzles and dialogue.

Still, while you certainly won’t hate your experience, Moebius offers nothing remarkable. You can have better adventures elsewhere.

Moebius: Empire Rising is out now on Steam for PC and Mac. The developer supplied GamesBeat with a code of the game for the purposes of this review.